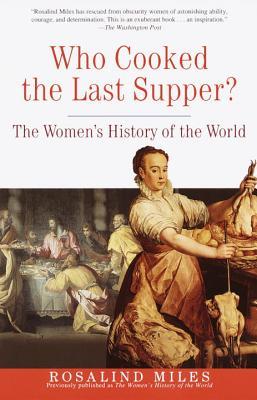 Who Cooked the Last Supper?

Who Cooked the Last Supper? is not the original title of Rosalind Mile’s formative women’s history text; that would be the American subtitle, The Women’s History of the World. For some reason, her publisher thought that American audiences would rather a slightly less dry title, even if the women who provided the Last Supper are not discussed in specifics (although they’re certainly covered in the abstract.) For some, this might be a turn-off, but I am of the opinion that whatever gets it into as many hands as possible is perfectly fine. (Nobody gets shamed for reading in this house.)

What that title also does is get across Miles’ quietly furious and deeply arch tone, with increasingly clever and occasionally vulgar punning as she digs deep into the last two hundred years of women’s history. I’m tempted to compare it to Bill Bryson’s affable and cozy work, but I find his humor frustratingly heteronormative, and he completely lacks Miles’ righteous and incandescent anger that boils over from time to time, especially in the later chapters. Miles knows her stuff so well that she’s able to find the humanity, humor, and outrage in all of these facts.

Part of the reason that I adore reading nonfiction is simply learning new things; part of the reason I adore looking into what I consider my various histories (women’s history, queer history, fannish history) is learning new and amazing things that I can draw strength from. Miles tosses off factoids in her breezy, sharp way that would send any feminist-minded kiddo atwitter. There’s the often quoted first historical calendar (why would someone need to mark lunar time if they weren’t menstruating?), the earliest known author Enheduanna, how the industrial revolution began the long and painful process that ultimately separated women from their menfolk and the women of their community, how monotheism inherently constructs a hierarchy and a binary, and how the threat of lesbians is women taking on masculine roles instead of actual homosexual acts. (I’ve known the converse to be true of homophobia directed at men for quite some time, but never considered the distaff perspective.)

The wary reader can rest assured that Miles does not demonize men. Early on, she punctures the idea of “Man the Hunter” by considering the corpse of an early man who had clearly been cared for by his community after a debilitating accident. Why is the aggressive masculine model valorized to the point of absurdism, she asks, when men and women must interact and therefore discover that each is a person in order to perpetuate the species? Courtly love, she argues, was a rebellion against a culture that did not give affection a proper place in people’s lives. The kyriarchy hurts everyone, although Miles, for obvious reasons, reserves much more venom for the slings and arrows aimed at women.

But, with a 1988 publication date, Who Cooked the Last Supper? suffers from the same thing 1988 mainstream feminism did: a decided and problematic lack of intersectionality, no matter the intentions for its absence. Miles ends the book with a quote from an unnamed young black feminist and does note, in a single sentence, the difficulties African-American feminists faced in the 1960s when forced to choose between the civil rights movement and second wave feminism. She does much better with more ancient history, neatly pulling examples from all over the globe to explain how the Great Mother came to be and how she fell from grace. Considering that Miles does specifically discuss how colonization particularly impacted indigenous women, I’m inclined to think that Miles simply didn’t have the benefit of the last twenty-six years of feminist theory (the term “intersectional feminism” was coined in 1989), but I can’t know that.

Still, despite that lack, Who Cooked the Last Supper?’s last chapters do throw into stark relief why feminism seems to have fragmented as of late. There’s the nichification of culture, of course, but, largely, the thing preventing complete gender equality is not a single law or a single barrier—it’s entire cultures. Changing cultural attitudes towards gender is a colossal undertaking. Just expanding the concept of femininity to where it is now took decades, and the next frontier (expanding the concept of masculinity) may take even longer. And that’s only the two genders represented on the suffocating gender binary. The fragmentation that some may see as weakness may, in fact, be our strength, allowing us to advocate and agitate on many fronts at once.

(It also allows us to weed out “feminists” like Caitlin Moran, who famously does not believe in intersectionality. It can be a win win, is what I’m saying.)

5 thoughts on “Review: Who Cooked The Last Supper?”