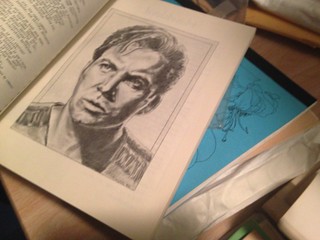 Okay, I know that photo is super-blurry, but old school fanzines! With typewritten pages! Swoon. It’s been a good week, friends.

tumblr user fashionable-gamer points out that “girls will be girls” is not a thing:

Ever notice how when justifying a child’s misbehavior no one ever says stuff like “girls will be girls” or “she’s a girl”, but the list of things a “young lady” can’t do is almost endless?

This Rolling Stone article about homeless queer youth really drives home the divide between “respectable” gay people seeking marriage rights and the most pressing threats to the queer community:

The problem is, running away, as Ben did, may deliver youth from their parents’ judgment, but not from that of God – whom more than half of the youth I spoke with said they still believed in – and once on the street, the psychological trauma that’s inherent in this deeply internalized shame often plays out to their detriment. And yet, as hard as it might be to imagine conservative faiths backing down from their demonization of homosexuality, it can be equally hard to get activists to address the issue. “LGBT­advocacy groups don’t want to talk about religion,” says Mitchell Gold, founder of Faith in America. “One, they don’t want to come across as anti-religion. And two, they just aren’t familiar with it. But the number-one hurdle to LGBT equality is religious ­based bigotry. The face of the gay-rights movement shouldn’t be what I call ’40-year-old well-moisturized couples.’ The face of the gay-rights movement should be a 15-year-old kid that’s been thrown out of his house and taught that he’s a sinner.”

This interview with Julie Sondra Decker about her upcoming book on asexuality is really interesting. I identified as asexual through middle school and high school (Nowadays, it’s “not gay as in happy, but queer as in boiling mountains”), and the vocabulary the asexual community has developed and the unique critical eye it takes towards sexual and romantic relationships is useful to anyone.

The difference between Rivers’ quip that her husband killed himself because she removed the bag over her head during sex (or that the only she conceived her daughter because her husband rolled over in his sleep) and Cho’s riff on the producer’s comment about the roundness of her face (“I had no idea that I was this giant face taking over America! Here comes the face!”) is that Cho places the shame squarely where it belongs—on our culture, and its militant insistence on one type of beauty.

This New Yorker piece on plus-sized fashion is fascinating:

Clothing changed, too: with manufactured garments came standardized sizes. People used to sew their own clothes (or, if they were wealthy, hired tailors), so they made clothes that fit their body’s shape. But factory-made clothes came in predetermined sizes. (In 1939 and 1940, the U.S. Department of Agriculture conducted a survey of fifteen thousand women’s bodies to devise commercial standards.) Suddenly, it became important for your body to fit your clothes, instead of the other way around: it was possible to try on a skirt in a store and think, My legs are too short, or My butt’s too big.