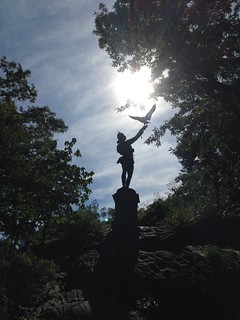 INTERNET AT LAST! I think ten days may be the longest I’ve ever gone without Internet as an actual adult. It’s been rough, but I’m back—and, of course, exploring my new digs, as evidenced above.

Here’s our first look at Paul Bettany’s take on The Vision in Age of Ultron. It… looks like the Vision, so good job. (Also, where is Natasha on that poster? I WILL HAUNT YOUR DREAMS, FEIGE.) Here’s a better look, where The Vision seems to be supporting his traditional costume in that mesh tennis fabric everybody’s wild about in superhero films.

Apple has announced the iPhone 6, the iWatch, and Apple Pay, or what we will inevitably be getting my father for Christmas. Thanks, Apple!

This article from The New Yorker made me ponder briefly on my preference for land travel:

Perhaps the most profound relationship between walking, thinking, and writing reveals itself at the end of a stroll, back at the desk. There, it becomes apparent that writing and walking are extremely similar feats, equal parts physical and mental. When we choose a path through a city or forest, our brain must survey the surrounding environment, construct a mental map of the world, settle on a way forward, and translate that plan into a series of footsteps. Likewise, writing forces the brain to review its own landscape, plot a course through that mental terrain, and transcribe the resulting trail of thoughts by guiding the hands. Walking organizes the world around us; writing organizes our thoughts. Ultimately, maps like the one that Nabokov drew are recursive: they are maps of maps.

Also at The New Yorker—have a great profile of Mary Beard.

Adult gathered seven New York-based writers to talk fashion, style, and class, including the amazing Arabelle Sicardi. The result is a panel that was added into my commonplace book in its entirety. There’s so, so much going on here and so, so much that hit home with me that I can’t quote from it, because you might make the mistake of reading the quote and not reading the panel.

James Corden will be taking over The Late Late Show from Craig Ferguson! I’m sad to see Ferguson leave late night (although his new talk show may also be pure anarchy), but Corden is a fine choice, if it had to be a white dude. He’s charming, good-natured, witty, can sing, and once ordered a pizza in the middle of The Big Fat Quiz of the Year with Jack Whitehall whilst wearing a tuxedo and then crying about Mufasa. Magical.

Peggy Carter will cameo in the season premiere of Agents of SHIELD. Aw, man, now I have to watch an episode of Agents of SHIELD, for my allegiance to Peggy is absolute. Here’s our first picture of her (and some of the Howling Commandos!) in the episode.

23 Jump Street is go. I quite enjoyed the first two films and Channing Tatum is a secret comedic genius, but it’ll only work if Lord and Miller return in the directors’ chair. They were starting to explore more visual humor in the second film, so I’d love to see them push that more.

Here are two excellent write-ups of Kate Bush’s extremely sold out Before the Dawn residency: one from Simon Price at The Quietus and one from Pete Paphides at HIDDEN tracks.

NPR’s Code Switch examines the contentious fashion of sagging pants by looking at how zoot suits—now considered quaint but sharp—were contemporarily seen as indicators of hoodlumism.

DC Comics also wants to make a live-action Teen Titans show with Nightwing as their leader. Of course, they’ll just be the Titans, because DC is too cool for teenage sidekicks these days. One of these days, I’m going to sit down and tease out what on earth DC Studios is doing. This would have worked perfectly had they started with a standalone Batfleck film. I mean, not in a way that I would tonally like, appreciate, or approve of, but it would feel less like a panicked reaction to Marvel Studios and more like a smart business decision.

Bryan Fuller will not cast a white actor as Shadow for American Gods! Whew!

Here’s a darling interview with Bill Hader about The Skeleton Twins, which I quite enjoyed.