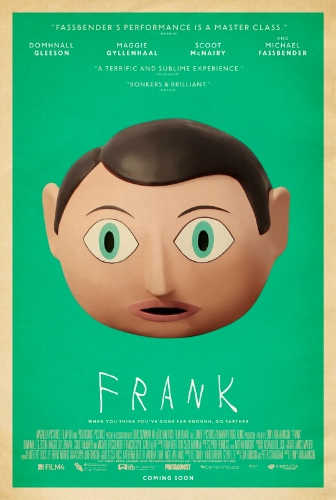 The end credits of Frank were rolling in the Sunshine Cinema, my very first New York City movie theater (complete with eye gougingly high ticket prices), and I couldn’t stop crying. Later, coughing up tears onto Captain Cinema’s Garfield shirt waiting for the F train, I finally articulated: “It just hit me directly in my fears. It’s about a man who loves something so much but he can’t be a part of it without destroying it.” What if, I didn’t say, it’s prophetic? The next morning, mercifully, I had the kind of déjà vu I often mistake for prophecy or cosmic assurance observing my new fuchsia bookshelf, but it was a rough night of the soul.

What you should know about Frank is that it will trigger the living daylights out of anxious creative types. What you should also know about Frank is that it is an astonishing and unsentimental film about genius, art, and mental illness. As mediocre but passionate musician Jon Burroughs (Domnhall Gleeson) chases the one fleeting moment of pure music he’s ever experienced playing with the Soronprfbs, he attempts to translate their surreal music, intense interpersonal bonds, and the artistic gifts of its lead singer, the eponymous Frank, into his own cliched and fame-hungry vernacular. Dissatisfied with his own inability to write original music (the film opens with Jon composing a song, only to realize that it’s a song by the Madness), Jon casts about for any solution or explanation for musical genius that he can co-opt for himself. Does art require a tragic childhood? Adversity? Mental illness? Slowly and surely, the film quietly explodes each of these ideas, leaving Jon with no one and nothing to blame for his mediocrity but himself.

And that’s where anxious creative types can take some comfort. While the film does argue that musical talent is innate and unlearnable, the reason that Jon is a mediocre musician is that he insists on being a musician. As the plot of the film, which sees Jon’s blogging earn the Soronprfbs a spot at South by Southwest, proves, Jon’s talents lie in promotion and marketing. The identity of musician matters more to him than the music itself, and that’s why his experience with the Soronprfbs leaves him so thoroughly disenchanted and disgusted with himself: they’re a group of people to whom music matters more than fame. And for Frank, music is the only way he can survive.

As much as the emotional journey is Jon’s, the film belongs, rightfully, to Michael Fassbender’s Frank. (Frank goes through an emotional arc as well, but it’s largely about he becomes stable again after Jon ruins his life.) Playing Frank is a once in a lifetime acting challenge—give somebody an internal life without using your face. While Frank, in a kind concession to Jon, starts saying his facial expressions out loud briefly, Fassbender is largely reliant on his body and his voice. (On a metal level, there’s something slightly funny about the famously shark-jawed Fassbender claiming he’s wearing a big nonthreatening grin.) He gives Frank a neat but slightly manic physicality, able to deal gently with everyone he meets but remain a danger to himself, and a gravelly but sweet American accent. And that’s, amazingly, all he needs to make even mostly static shots of the head ring true emotionally.

Gleeson’s performance, like everyone else’s performance in this wonderful cast, will be rightfully overshadowed by Fassbender’s, but playing Jon requires a delicate balance of being affable enough to garner some sympathy while still being a pretty despicable human being. After all, this is a man who exploits Frank while trying to convince himself that he’s giving the singer a choice every step of the way.

It’s the same kind of balance that the film requires, really, as it swings between dark comedy and an unemotional take on mental illness. A character whose agalmatophilia is introduced as a wicked way to deflate Jon’s desperate attempts to reassure himself to do the right thing is given a loving send-off that includes a mannequin leg full of flowers. The last third of the film eschews comedy to focus on what lies at the heart of Frank, but still manages to sneak in a joke about how the anonymity of the Internet Jon so cherishes allows people to be horrible. Ultimately, Frank lures you in with its dark comedy and high-profile cast, but leaves you with little to no answers about the events that unfold and what they imply about art. It’s unsettling, as my experience proves, but that also makes it the kind of film that stays with you.

And those are the films worth watching.