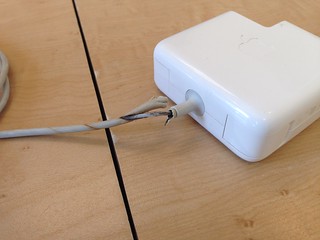 Georgia’s parting gift to me: my MacBook charger catching on fire. This is, obviously, not supposed to happen, so I got it replaced for free. Catch you later, Southlands.

Who didn’t tell me Chris Addison is guesting on Doctor Who this series?! I thought we were friends, y’all. (Also: Capaldi is genius in the role, the premiere was pretty solid, and Moffat must be stopped at all costs.)

Bill Hader is an awesome human being and Grantland’s current celebration of Saturday Night Live profiled him. I was particularly struck by how well Amos Barshad transcribes Hader’s speech patterns, because a lot of his affable comedy comes from his voice.

The BBC has commissioned a sitcom featuring a young cis man and a slightly older trans woman as their central couple! I am often astonished by the sheer breadth of stuff the BBC funds (Noel Fielding’s Luxury Comedy, anyone?), so this is a pleasant use of their resources.

The Emmys happened on Monday! Sofia Vergara was objectified as a “joke” and they gave Steven Moffat an Emmy for the worst episode of Sherlock. But Weird Al’s theme song montage was fun and I am always delighted to see Seth Meyers and Amy Poehler be besties, so I got something out of it.

Captain Awkward handily collects all her dating advice for those seeking partners in this post.

A handy explanation of stalking, also from the good Captain:

There’s stalking behavior and there’s Stalking. I know commenters have expressed dismay and displeasure here when the kind that is a deliberate attempt to terrify and control someone through explicit threats of violence is treated the same as the kind where a heartbroken and seemingly clueless person keeps reaching out and reaching out with unwanted contact and won’t seem get the hint to leave someone alone. I suspect the person who typed this into a search engine is more like the second kind, but (and I say this as someone who has tried to hold on WAY too hard after a breakup in my younger days and who has sent many unwise verbose teary emails to dudes who were too nice to say “Jennifer. Stop it. Stop it now.”): Stalking and stalking behaviors exist on a continuum, and when you’re on the receiving end you can’t always tell the difference or how it might escalate.

“The Order of the Good Death is a group of funeral industry professionals, academics, and artists exploring ways to prepare a death phobic culture for their inevitable mortality.“ I stumbled across the Order while looking for something else, and I find their mission utterly fascinating.

Not safe for work but certainly safe for your heart: Kristin Stewart doesn’t care what you think about her. A thousand hearts.

The latest Tropes Vs. Women in Video Games is out—and the backlash forced Anita Sarkeesian from her home after death threats. This is just so absurd and sad.

Apparently, Warner Brothers frowns on jokes in its DC films. This explains so, so much.

The amazing Bill Hader has curated a list of two hundred films that every comedy writer should see. Hop to it, superfriends!

The always awesome Genevieve Valentine writes on rational dress and the politics of trousered biking costumes in the Victorian era for The Toast.

Ridley Scott attempts to excuse the whitewashing of Exodus: Gods and Kings by claiming that Egypt was just really diverse! Which is why all the leads are white and the servants and slaves are played by people of color! Vomit.

The latest archaic feminine ending to add to my collection: -ster is the Old English feminine agent noun suffix! Thus a brewer is a gentleman brewer, while a brewster is lady brewer. Etymology is magic, y’all. Thanks, Mental Floss!

I knew that turning the other cheek was, in fact, a way to force a Roman to strike you the way they would a superior, but this tumblr post elaborates on two other teachings of Jesus that also fight the power.

The always awesome Gavia Baker-Whitelaw contrasts and compares WorldCon with Nine Worlds to look at the generation gap between science fiction fandom and media fandom.

tumblr user apartyoflovers identifies all the books on Steve Rogers’ bookshelf in Captain America: The Winter Soldier. Madam President and A Moveable Feast are especially heartwarming, but now I’m wondering who plays Robert Redford’s part in the film adaptation of All The President’s Men in the Marvel Cinematic Universe. My kingdom for Natasha talking about the movie starring “Dustin Hoffman and… that other guy… ah, it’ll come to me.”

Enver Gjokaj will be playing Agent Daniel Sousa on Agent Carter—a disabled character described as “honorable” and “gentle.” Gjokaj was a revelation on Dollhouse, and I’m glad he’s getting incorporated into the Marvel Cinematic Universe (beyond his bit part as a cop in The Avengers.) Also, if he ends up being Mr. Carter, I will be over the moon.

This Tales of Metropolis short is adorable, from the delightful character design to Bizarro in the background to Clark being a total dork. See, DC? You can do fun all-ages stuff!