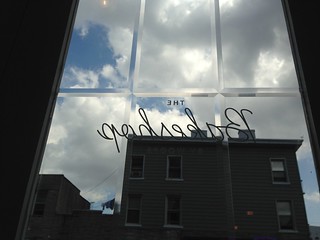 One short and successful trip to New York later, I can happily say that this time next week, I’ll be in Brooklyn permanently. Huzzah huzzah!

The Hugos were last weekend! It was a fantastic group of winners, from Kameron Hurley as Best Fan Writer winning Best Related Work for “We Have Always Fought” to Ann Leckie’s Best Novel win for Ancillary Justice. Check out all the winners and highlights from the ceremony at io9.

The humans in Dungeons and Dragons are now illustrated by a black woman with natural hair. Progress marches on in speculative fiction in all mediums!

Don Pardo, the voice of Saturday Night Live (and NBC in general before his retirement), has passed away. He’s been such a quiet but permanent part of my life. Goodness.

Ignatiy Vishnevetsky at The A.V. Club writes about his childhood favorite film, 1994’s The Shadow, but first struggles against his (perceived) limits of criticism:

The invigorating, dispiriting, frustrating, meaningful thing about writing film criticism is that it forces you to disassemble these personal reactions; everything works for a reason, and sometimes that reason is you.

I’m quoting this because “everything works for a reason, and sometimes that reason is you” is a fantastic line, and also shows why this is an attitude towards criticism that I completely resist as a reader-response theorist and fan. Media enjoyment is inherently subjective, so why not embrace that the reason is you and make the criticism more personal? Isn’t criticism inherently personal in the first place? It’s a lot to think about.

Evangeline Lilly’s new do for Ant-Man makes her look suspiciously like the Wasp, despite playing Janet Van Dyne’s daughter. Hmm.

David and Aimee Thrulo’s Lee Nez series, about a Navajo cop who is also a vampire, is coming to the big screen! Yay, sf representation!

Chris Plante’s “Street Fighter: The Movie — What Went Wrong” is about the jaw-droppingly incompetent filmmaking behind the infamous flop. (I’m super-late to this, I know.)

At BuzzFeed, Soraya Roberts looks into the real people behind Flashdance and how Hollywood left them behind.

The first casting news for Andy Serkis’ adaptation of The Jungle Book is the predictable but welcome news that Benedict Cumberbatch will voice Shere Khan.

“Fantastic Breasts and Where To Find Them” is a devastating slam poem about how homegrown fanfiction erotica is stigmatized despite the dehumanizing narratives of the mainstream pornography that is considered “normal.” “Don’t you give me raw meat and tell me it is nourishment. I know a slaughterhouse when I see one.” (Uh, not safe for work. But necessary for life.)

The Curve, a feminist-minded look at economics, has been knocking it out of the park recently. This week, the panel examines the criminalization of working mothers, the devaluation of childcare, and the need for universal childcare to be a major feminist platform.

Streamus is a Google Chrome extension that streams music from YouTube. Great for covers and international music Spotify and iTunes might not carry.

At The New Republic, William Deresiewicz’s “Don’t Send Your Kid to the Ivy League” is a scathing indictment of elite education in the United States and its supposed meritocracy:

Learning how to think is only the beginning, though. There’s something in particular you need to think about: building a self. The notion may sound strange. “We’ve taught them,” David Foster Wallace once said, “that a self is something you just have.” But it is only through the act of establishing communication between the mind and the heart, the mind and experience, that you become an individual, a unique being—a soul. The job of college is to assist you to begin to do that. Books, ideas, works of art and thought, the pressure of the minds around you that are looking for their own answers in their own ways.

It’s all quotable, but this particularly hit home for me, because I, in the words of Captain Cinema, manifested in college. Don’t forget to check out The Atlantic’s interview with Deresiewicz, which touches on his new book Excellent Sheep, his experiences in academia, and mental illness.

Films
Purchased: None
Added: The Heroic Trio (via Deadspin)