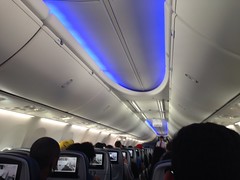 Phase Two of Operation New York is go, but oh, how I despise traveling. I thought I’d come to terms with it as an adult, but I haven’t.

The situation in Ferguson is just horrifying. Code Switch breaks down the facts and implications of Michael Brown’s murder. The #IfTheyGunnedMeDown hashtag is also an incisive commentary on it. Jacobin points out how our sudden outrage over Ferguson, borne mostly of grassroots activism on Twitter, indicates even larger problems for the United States and race.

With the tragic passing of Robin Williams, there’s been an absolute storm of amazing writing about the man and his career. But David Kalat’s tribute to the very strange Popeye particularly touched me, despite being written before his death.

Marvel wants to bring the Inhumans to the big screen. Better not before Captain Marvel or Black Panther, that’s all I’m saying.

Hyrule Warriors, despite its seriously bizarre costume design, is oddly committed to all ladies, all the time—to the point that there was a lady Link, Linkle, designed and considered. Adorable!

Two competing Mary Shelley biopics? Did I pass out and wake up in the best timeline? We’ve talked about A Storm in The Stars, but Mary Shelley’s Monster, starring Sophie Turner, sounds a little more primed for the teenage goth set. The more the merrier!

Noel Murray talks about what films they actually don’t make anymore over at the Dissolve.

Most of my writing work to date has been for Star Trek. Although the various television series could have done more in their respective times to portray ethnic and gender diversity, those of us who write the licensed Trek fiction continue to do our best to depict a more progressive, enlightened, open, and harmonious future, not just for humanity but for all sentient beings. One in which love, equality, and compassion are the touchstones of civilized society.

I will never be made to feel shame for doing this. I am proud that we’ve been able to do this. I know we’ve still got more work to do, and we can do better at integrating more diverse viewpoints and characters into the ever-expanding universe of Star Trek.

tumblr user sansaspark proposes that, in Disney’s Mulan, Mulan herself is the Great Dragon that is awakened during the film.

Pop Sonnets is the tumblr you didn’t know you needed in your life, rewriting pop lyrics to become classic sonnets. Delightful.