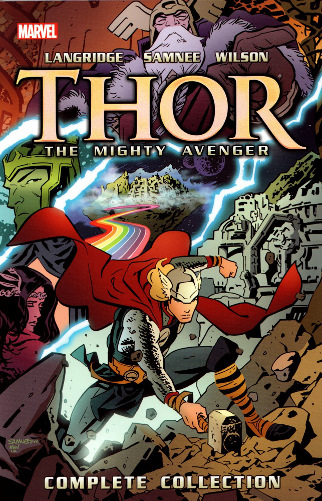 Thor: The Mighty Avenger
by Roger Langridge and Chris Samnee

Thor: The Mighty Avenger was both the first Thor comic I ever bought and the first comic I ever bought sight unseen. Trawling eBay for Harley Quinn material, I found an issue of Joker’s Asylum II, a short anthology series. It’s a wonderful comic—I especially adore how the art allows Harley to be adorable, a little grotesque, and look like an actual human being—but the cost of shipping took me aback. Looking at the other seller’s items, I found the first two issues of Thor: The Mighty Avenger for pretty cheap. “Looks cute,” I reasoned, and added them to my order.

What I got was a delightful all-ages riff on Thor’s origin story, casting Jane Foster as the new Head of the Department of Nordic Antiquities in Bergen, Oklahoma, as well as the whole proceedings in a light, sweet tone. Contrasted against my desperate search for any Harley Quinn material that treated her well and wasn’t too grimdark for my blood, this was just one of many moments that slowly steered me towards Marvel and away from DC.

Naturally, since I liked it so much, it had already been canceled, eight issues into a planned twelve issues. I’m not sure why, but I imagine that the film, released in 2011, had something to do with it. Thor: The Mighty Avenger, as people have pointed out, feels, at time, like a great pitch for an independent Thor cartoon, complete with heroes and villains dropping by each week. But it doesn’t play as nicely with the Marvel Cinematic Universe as does, say, Avengers Assembled, which features Adrian Pasdar’s best Robert Downey Jr. impression. In its short run, Thor has run-ins with Mr. Hyde, Namor the Sub-Mariner, and Captain Britain—all familiar to comic fans, but not to movie fans. However, there’s no wrong angle to come at the Marvel canon; I simply think that any all-ages material Marvel puts out tends to hew slightly closer to the films (thus Phil Coulson’s inclusion in Ultimate Spider-Man).

Which is a shame, because Thor: The Mighty Avenger is so much fun, picking and choosing from Thor’s history to create a streamlined, funny, and occasionally touching version of events. Thor’s Nordic origins are leaned on but played with—a Free Comic Book Day issue included in this collection and in continuity with the series finds Thor being utterly useless at identifying Nordic artifacts, because he’s an alien. Thor and his cohort all speak English like original flavor Robin Hood (…is there an original flavor Robin Hood? I think you catch my drift, however), but Loki has long mastered the art of human slang. Thor’s great feat of strength that closes out the series is not one of violence, but one of cultivation.

This gentleness, along with Chris Samnee’s gorgeous, bright, and chunky artwork, makes it perfect as an all-ages title. There’s plenty of references that adults will get and will leave tumblr sighing, such as Thor rushing into a bar to protect a young woman from Mr. Hyde’s repulsively amorous intentions or Thor and Jane clearly having sex after an enjoyable evening together. Any darkness comes with its slight emotional complexity, such as Thor wondering what happened for him to have been cast out of Asgard with the memories of that act removed. (The series, alas, never gets a chance to answer that.) This is the kind of title that you’d be happy to put into the hands of a kid.

There’s only one small problem with Thor: The Mighty Avenger: Thor. Don’t get me wrong, I love Thor. But Thor, especially this iteration of him, is often only particularly interesting in the context of other people—Jane, of course, but also his friends, his brother, and his father. Left to his own devices, he’s fine, but not totally engaging. It’s pretty telling that my favorite superhero in Thor: The Mighty Avenger is actually Captain America. In that Free Comic Book Day issue, we meet Steve in the 1940s, and his wry humor, love of Arthurian legends (which makes total sense), and general salt-of-the-earth nature is so refreshing against the good-natured but fairly flat Thor.