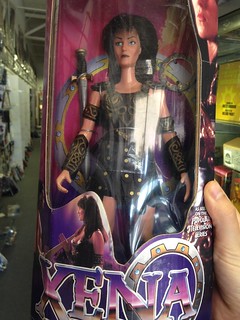 Usually, I like to update y’all on what’s going on with me—besides, of course, my secondary mutation of being able to find vintage Xena merchandise wherever I go—but yesterday I took the first step towards something I’ve been working towards for a long time, and I’m alternating between panic, joy, and relief. So, uh, how was your week?

DashCon. Just… DashCon. Cleolinda Jones tracks the debacle that was a very poorly run tumblr-focused con on Storify for your edification.

Marvel has been having a field week this week, announcing that the next person to bear Thor’s hammer would be a lady and that tumblr’s beloved Sam Wilson will become the next Captain America, making him the second black man to carry the shield. Due to their length (infinite), writing mainstream comics is a long, slow tread back to the status quo, but the fact that Marvel is not only supporting these story ideas and executing them, but also going out of their way to market to new demographics is so, so heartening. Although it is not heartening to hear that Rick Remender will be writing Sam’s adventures as Cap.

(Also, given that Chris Evans is going to bolt out of his Marvel Studios contract the second he can, it’s not absurd to think that Anthony Mackie might be interested in taking over the role.)

Meanwhile, DC is erasing the fact that Constantine is bisexual for his television debut. There are a lot of articles about it, but I’m particularly linking that io9 one. A commenter quoted in the post points out that Constantine being queer is an essential part of the character—his character was specifically created as a reaction to Margaret Thatcher’s politics. (Of course, requiring queerness to be an essential part of the character before we can actually show them being themselves is a stupid argument expressly designed to erase queer characters.) Come on, DC.

There’s going to be a Power Rangers reboot. Roberto Orci is attached. Meh.

The Robinhead has created a charming comic about an alien attempting to figure out what Earth’s gender roles signify when faced with an essentialist jerk. “I’m saying that there is no gay. Your genders are completely imaginary,” the alien says. Interesting thought experiment.

At Autostraddle, Ali shares her experience with disordered eating as a masculine-of-center woman:

I got a taste of something I had never known — shopping in the men’s department afforded my body the opportunity to take up the amount of space it actually takes up. Masculine people are afforded the privilege of space. Feminine people aren’t. Feminine people are supposed to be so small that they disappear. That they maybe make themselves disappear in that quest for lightness, for smallness, for compactness. Like flowers being pressed until they’re flat. Not all feminine people do it, but I think most of them feel the pressure.

Tumblr user elucipher has a fantastic reading of Snowpiercer as pure allegory.

A harrowing quote about the Beat writers and women in history:

A woman from the audience asks: ‘Why were there so few women among the Beat writers?’ and [Gregory] Corso, suddenly utterly serious, leans forward and says: “There were women, they were there, I knew them, their families put them in institutions, they were given electric shock. In the ’50s if you were male you could be a rebel, but if you were female your families had you locked up. – Stephen Scobie, on the Naropa Institute’s 1994 tribute to Allen Ginsberg

As tumblr user queereyes-queerminds points out, “Absences of women in history don’t “just happen,” they are made.”

Christina Chong has been added to the cast of Star Wars: Episode VII. I have a sneaking suspicion that the various ladies recently announced will have itty bitty roles, but I also secretly hope they steal the film and become the core cast of Christie and Nyong’o Versus The Universe.

Weird Al took over the Internet this week to promote his new album Mandatory Fun; Bex Schwartz wrote a lovely piece about her Weird Al fandom and how it got her to where she is today.

Books
Purchased: None
Added: The Shadow Hero by Gene Luen Yang (via io9)