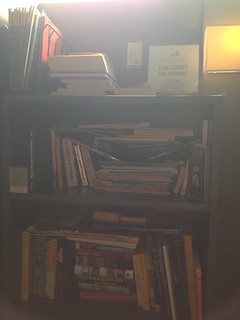 I finally went to the Sie Film Center this week, the home of the Denver Film Society. I saw Snowpiercer, which I loved. Otherwise, I’ve been having a good week—feeling more on top of my time management, journaling more, and gathering steam for Operation New York.

Steven Moffat teases that the Doctor doesn’t have to be an alien. Um, yes? That’s the entire point? That he looks human but is not, necessitating the companions to keep him from turning into a destructive, lonely, godlike figure with no frame of reference for morality? Steve, did you even watch the Tenth Doctor’s run? Because you wrote episodes for it. He’s finally lost it, y’all; the Doctor and Sherlock will merge into a mansplaining, gangly, pale beast with a double-jointed neck and no chin, and he will be named Mteven Soffat.

Let’s wash our brains of Moffat with this fascinating alternate history video, which uses tumblr user’s SmugMode’s ideas for American actors as the Doctors to create a fifty years tribute video for this hypothetical American Doctor Who. The casting choices are both dead on and inspired—Gene Wilder as Four! Sam Rockwell as Ten! Donald Glover as Eleven!—and it makes fantastic use of hilarious special effects throughout the years. (Grace Jones appears in a Sixth Doctor clip; I posit that she is not a companion, but the Master.)

I’ve been enjoying the World Cup largely because I get to hear cute stories about my nephew being inducted into soccer fandom by my dad and my brother. But Valerie Alexander points out that American player Landon Donovan is incorrectly cited as America’s leading goal scorer—because America and the world’s leading goal scorer in soccer is Abby Wambach, with four other ladies behind her before you even get to dudes. She uses it to go on and explore how men are considered neutral in our culture, but I’m just struck by how this reveals how women’s sports are considered an afterthought even when they’re more technically proficient.

New to feminism? Come on in, darling, the revolution’s fine! Carmen at Autostraddle has a breezy, accessible breakdown of feminist history and submovements to get you oriented.

Empire has the first look at Ian McKellen as an elderly Sherlock Holmes in Mr. Holmes. I didn’t realize the film, based on the novel A Slight Trick of the Mind, would involve Japan so much! Awesome.

Jam of the week: Eartha Kitt performing “Angelitos Negros,” the eponymous theme to a Mexican film about racism. The film is from 1948; this performance is from 1970; and the message is still extremely applicable in 2014. Also: nobody can flash their eyes like Eartha Kitt did.

Tumblr user lordbyronsbloomers imagines Fantastic Beasts and Where to Find Them with fan favorite Nathan Stewart-Jarrett as Newt, but also Nella Larson and Duke Ellington as part of the magical community in Harlem. SCREAM.

Bucky Barnes is getting a new series in October, Bucky Barnes: The Winter Soldier. Why is this exciting (besides the usual)? Because writer Ales Kot has this to say about the series:

AVC: What are some of the themes you’re planning to explore in Bucky Barnes: The Winter Soldier?

Kot: Besides the ones I already named—fluid identity and fluid gender. Many worlds theory, maybe. Feminism. Taoism. Pacifism. Nature and the systems we impose on it. Life in space. Empathy. Power unrestrained and power controlled. The Randian belief in the vampire self/20th century capitalism, what it brings, what can come after. Did I mention empathy? I know I did. I’ll mention it again.

Rolling Stone’s “Six Seconds Between Love and Hate” is an article about the heretofore unknown to me “love story” of two Vine superstars that ended in rape. It’s a really fascinating look at Vine as a platform and what goes on behind it versus what it looks like, but the most harrowing part is when Curtis Lepore, who denies that he raped her (only that he had sex with her while she was unconscious, which is still rape per California law and all human sanity), angrily declares that “I would have never done anything that I didn’t think a girl was insinuating, anyway.” That sentence is a perfectly concise way to express rape culture: essentially, Lepore is stating that he thought Smiles consented because she hinted at consent, not that he thought she consented because she actually consented. This makes me want to rip my teeth out.

Nailed It is a documentary seeking support on IndieGoGo about the history of Vietnamese women in the nail industry in the United States, as well as the contributions of African-American women, workers’ rights issues in the industry, and more. This looks so fascinating! Go throw a couple dollars at it, if you so desire.

MTV just ordered a full series of an adaptation of The Elfstones of Shannara. Fantasy? On MTV? I’m so, so down.