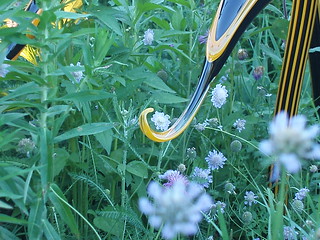 My parents are visiting this weekend! We’ve been having fun doing touristy things, like going to the Botanic Gardens. I also received quite a bump in visitors when I was linked to on BuzzFeed this past week. If you came from there and decided to stay, welcome, welcome! Let’s see… I was raised by French wolves, I like tall dark femmes, and I cry about comic books a lot. That’s basically all you need to know to get up to speed around these parts.

Whoops—“Any Moment” and Emily Blunt and Chris Pine making out are, in fact, in Into the Woods. False alarm, world!

A lot of racebent casting is, more or less, colorblind, which is perfectly fine. But it’s always more interesting when a different choice offers a new perspective on a character, as tumblr user thunderboltsortofapenny finds with the fancasting of Aldis Hodge as Tony Stark. I’m not a huge fan of tag meta, but that’s just me being a fandom old. Back in my day, meta came in essay format!

Fangirls is a documentary about female fans and fandom (based primarily in the Lord of the Rings fandom) currently seeking funding on IndieGoGo! Throw some money at it.

Aaron Carapella has created a map of North America putting every Native American tribe where it was originally. I can’t believe something like this hasn’t been created before.

The first teaser for The Hunger Games: Mockingjay Part 1 is out. Holy crow, the marketing team is knocking it out of the park with the propaganda-inspired materials. This is how you use a medium to critique itself.

At Comics Alliance, Andrew Wheeler’s three-part series, Mutant and Proud, examines the X-Men as a metaphor for the queer community, and the way it succeeds and fails at doing that. Part one is about chosen families; part two is about the supposed danger of queer folk. Part three is forthcoming. Wonderful, wonderful work.

Here’s our first look at Descendants’ Kristin Chenoweth as Maleficent. It is as Disney Channel Original Movie as you might expect, although I’ve just realized that the kids are very Kingdom Hearts. This movie may be everything preteen Clare would have wanted.

Raina Lipsitz at Aljazeera questions why our culture thinks the recent spate of misogynist spree killers came out of nowhere, when their hate was so easy to follow:

Most mass murderers do not go from zero to 60. Rodger made escalating assaults on women (splashing coffee on them, attempting to shove them off a ledge) before his killing spree. Both Cho and Justin-Jinich’s murderer harassed women before they killed anyone. When such acts go unnoticed and unpunished — because we expect men to harass women, and it’s not outrageous or even noteworthy when they do — they can become stepping-stones to more conspicuous and less socially acceptable acts of violence.

Former Disney animator Glen Keane returns to animation with “Duet,” an animated short. If you adore his linework, you’ll love this.

This is my nephew’s favorite song right now. (Largely because he probably thinks that Zinedine Zidane is an actual superhero.) He is way cooler than I am, and he is two.

Purchased: None
Added: Outlaw Marriages by Rodger Streitmatter (via Twitter)