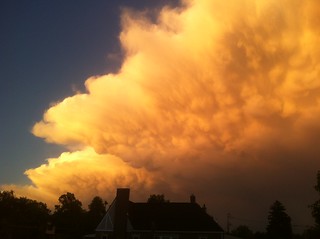 Summer is here, heralding ninety degree weather here in Denver and, fingers crossed, my last season on the wrong side of the Mississippi. I’ve already started cutting up thrift store shirts to make new tank tops, although I’ve wisely decided against my initial impulse to tailor them. It’s been a pretty chill week; I got to spend some time in Black and Read this week, even if it was after major enough dental work that I was dribbling into a napkin the whole time. (But I’m apparently so boss that I didn’t need the equally major pain medication prescribed, so, you know, it works out.)

The Academy of Motion Picture Arts and Sciences has started a new YouTube channel, Academy Originals, featuring short videos about various cinematic topics. The four they have up now cover Patton Oswalt screening A Blast of Silence with a friend, blind theatergoers, and screenwriting.

This week’s jam: Girls’ Generation’s “I Got a Boy.” I fell down a K-pop rabbit hole this week.

This series of tweets from Imran Siddiquee explains how demeaning women is used by men to shore up social status with other men.

Kameron Hurley discusses writing queer characters and her own coming to grips with her desire for another woman:

It makes us the most poorly paid, but the most powerful people in the world. And I take that power seriously.

So when my editor wrote, “we get it. She has sex with women and men,” I crossed out the line of stupid narrative. Then went back, and got rid of some more. I made Nyx’s world normal.

And by doing that, by crafting something different, I could show people that maybe, just maybe, there were other ways to be. Maybe not *this* way – Nyx is not the world’s best person, and her planet has some issues – but certainly people can live in *different* ways.

We’re all only as normal as the stories we tell ourselves.

Dr. Strange is go at Marvel Studios. Prayer circle for Oded Fehr to be cast.

N. K. Jemisin’s Guest of Honor Speech for Wiscon 38 is an amazing and incisive call to action for the sf community:

Arm yourselves. Go to panels at Wiscon and claim the knowledge and language that will be your weapons. Go to sources of additional knowledge for fresh ammunition — histories and analyses of the genre by people who see beyond the status quo, our genre elders, new sources of knowledge like “revisionist” scholarship instead of the bullshit we all learned in school. Find support groups of like-minded souls; these are your comrades-in-arms, and you will need their strength. Don’t try to do this alone. When you’re injured, seek help; I’ve got a great list of CBT therapists, for any of you in the New York area. Exercise to stay strong, if you can; defend what health you have, if you can’t. And from here on, wherever you see bigotry in the genre? Attack it. Don’t wait for it to come directly at you; attack it even if it’s hitting another group. If you won’t ride or die for anyone else, how can you expect them to ride or die for you? Understand that there are people in this genre who hate you, and who do not want you here, and who will hurt you if they can. Do not tolerate their intolerance. Don’t be “fair and balanced.” Tell them they’re unwelcome. Make them uncomfortable. Shout them down. Kick them out. Fucking fight.

The latest Ask Polly, about finding out what you really want, sliced me down to the bone marrow. In high school, I once confessed to feeling guilty about not having any passions in an acting class. One of my classmates simply said, “Yeah, but you like acting.” We were quickly called to lunch, but I remember just being completely stunned by his response. I had passions, obviously, but I had never considered my passions worthwhile simply because I thought I needed somebody’s else approval for them to mean anything. The column asks its letter writer to live in the moment and just be to get in touch with themselves. Just be here now.

I finally got around to reading this awesome essay about the Winter Soldier that Renay linked to, and it’s a genius reading of the character.

The AV Club’s Mike D’Angelo’s latest installment of Scenic Routes makes an argument for what makes film unique: “What cinema can do that theater can’t is juxtapose two images in a way that creates a feeling neither image alone could inspire.”

Meanwhile, sister publication The Dissolve contemplates just who could play the Sorcerer Supreme—through the decades, of course, in one of their best features. (Oded Fehr is not mentioned. Come on! Just look at him.)

Agent Carter will feature Dominic Cooper’s Howard Stark, to the delight of all. This presumably means a young Maria Stark will turn up at some point, so this means friendship and ladies all over the place! Woohoo!

A repost at Sociological Images proposes that the idea of men as commitphobic might have been invented in the sixties to sell more ads in Playboy.

I’m not engaging with that Slate article complaining that young adult fiction is for little baby children, because I am laughing too hard at people still shaming other people for what they enjoy. Have io9’s takedown instead.

Lupita Nyong’o will be producing and starring in a film adaptation of Chimamanda Ngozi Adichie’s Americanah! I just want Nyong’o to play amazing, intricate women in big-budget summer movies in order to fund a parade of amazing films.

The Edge of the Spider-Verse miniseries will feature different takes on Spider-Man, which will then team up because comics. (God, I love comics.) One such Spidey? Why, it’s Gwen Stacey as Spider-Woman in her very own Spider-hoodie. (…spider.)

The Freelance Feminist tears into any narrative of the UCSB shootings that frames the shooter as lonely or rejected:

Elliot Rodger was not lonely. Girls did not reject him. He did not want them to love him. He made his motive crystal clear for us: He hated women because he saw them as a status symbol that he could not get his hands on. According to his manifesto, Rodger barely ever spoke to girls. He never gave them the opportunity to “reject” him. He inflated perceived slights—a little girl snapping at him for falling into her, women having the audacity to date other men—into unforgivable injustices. He expected women to hand themselves to him as a reward for existing and for being male.

Loneliness is a longing for human contact and connection. Love is mutual care and understanding. Elliot Rodger wanted to possess a woman as validation, to secure his status in the eyes of other men. That is the motivation of the desperate men posting on PUA and incel message boards.

Stacy Bias examines the concept of “the good fatty” in the context of living in a capitalist society. Fascinating and necessary read, especially since this is the first time I’ve been formally introduced to the idea of Western morality being intimately tied with (perceived) productivity.

Purchased: Star Trek: The New Voyages 2 edited by Sondra Marshak and Myrna Culbreath (at Black and Read)
Added: The Animator’s Survival Kit by Richard Williams (via the Dissolve)