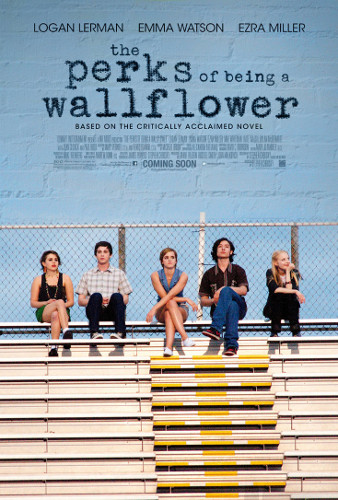 Rather, I believe in serendipity. The moments we think of as perfect can’t be snuck up on. Instead, they sneak up on you.

Watching The Perks of Being a Wallflower snuck up on me. I adored the novel in all its universality and specificity, but as soon as the film ended, I found myself crying and laughing uncontrollably into my knees, muttering the solution to a pressing decision into my lap. I’d forgotten that it was May. It was my first May that didn’t involve the end of a school year and all those attendant hopes and fears. I was both nostalgic for what May used to mean and grateful for what May means now—that I am a woman grown (more or less), with her fate in her own hands.

The film adaptation of The Perks of Being a Wallflower is one of those rare films whose adaptation is directed by the author of the work being adapted. (Wikipedia’s since deleted their list of similar works, but it’s been cached.) These do occasionally happen from time to time, but the amount of control Stephen Chbosky was given over the adaptation of his beloved novel is still kind of astonishing. (And this was after he originally sold the rights to John Hughes, who was thinking of turning it into his comeback before his passing.) This makes for a pure but not purist adaptation of the novel. Several elements from the novel are missing or changed—Sam and Patrick don’t smoke, Charlie’s sister’s abortion is dropped, and the iconic tunnel song is David Bowie’s “Heroes,” not the slower “Landslide”—but the story’s fragile, dark, and hopeful beating heart remains, largely, unchanged.

In fact, watching the film was a bit like seeing the novel from a new perspective. I try to avoid thinking like that when it comes to film adaptations, because every adaptation is, ultimately, a codification of someone’s reading of the original story. But because Chbosky is elaborating on his own work, he takes the time to explore different facets of the story. For instance, while the film is explicitly told from Charlie’s perspective (with the camera often taking on his gaze), we see, early on, Patrick and Sam make the decision to take Charlie under the wing once they learn that Charlie is recovering from the suicide of his only friend. (And, on a much more selfish note, we also get to see everyone dolled up for The Rocky Horror Picture Show.)

But the story remains firmly Charlie’s evolution from a character struggling to surface in the face of so many emotions and so much pain—both his own and the pain that he borrows, because he believes that is what love is—to a character ready to be an agent in his own life. And Logan Lerman plays Charlie perfectly. When the AV Club recommended this film, several commentators scoffed at the idea of three regulation hotties being the outcasts, but Lerman gives Charlie exactly the right energy—painfully sincere, emotionally jittery, and just a little off. It comes out in the haphazard ways he reveals the tragedies of his life, his increasingly ineffective coping mechanisms for his depressive episodes, and the almost distancing respect with which he treats his friends. While Lerman was actually older than Ezra Miller, who plays Patrick (and does so to the hilt), his Charlie is undeniably young. While the whole film is extraordinarily well-cast, even a slightly off-kilter Charlie would ruin it. With Lerman at the center, it flies.

While the film is very obviously set in the nineties (witness Charlie and friends being utterly unable to identify David Bowie’s “Heroes,” in a moment that made me eternally grateful to live in the future), the film never broadcasts or downplays that fact. (Well, Paul Rudd’s presence as a Clueless reference does that too, although I do like the idea that Matthew Broderick plays his part in the alternate timeline next door.) The cinematography is gorgeous, with occasional flashes of inspiration when it comes to visualizing Charlie’s interior life. (A one-off gag where Charlie fantasizes about telling Patrick just how awful his love life is is particularly genius.) It’s just a little grainy, to recall actual film, and beautifully lit.

Usually, when it comes to adaptations, I know immediately if I preferred the source material or if they’re so different that such preferences are ultimately meaningless. I don’t know where I am with The Perks of Being a Wallflower—both texts left me in glad, glorious tears. I’ll probably come down on the side of the novel, simply because of the subplots cut from the film, but I will say this: the novel does not have Patrick teasing Charlie for being totally addicted to the Smiths’ “Asleep.”