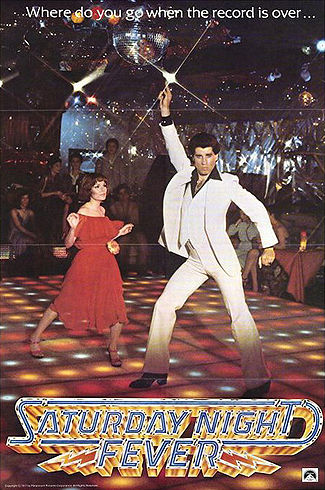 In 1980, which was still practically the seventies, Paramount wanted to capitalize on the popularity and success of John Travolta. To do so, it started sending out double features to movie theaters featuring Grease and Saturday Night Fever—both rated PG.

Now, as every musical theater kid learns at some point in their development, Grease is a pretty good argument for the development of the PG-13 rating that was introduced with Indiana Jones and the Temple of Doom. But this is why people think of Saturday Night Fever, a beautiful, painful film, as fare appropriate for the kiddos. This film codified and perpetuated the late seventies and disco the same way Clueless codified and perpetuated the nineties. It’s easy to think of it as a kitschy disco time warp, especially when there’s a supposedly kid-friendly cut of it floating around in the great pop culture subconscious.

I make no bones about the vast ocean of cultural blind spots I swim in; there’s nothing quite so satisfying as the bewildered, shocked, and horrified faces people pull when you tell them you’ve never seen The Wizard of Oz. But I also make no bones about the fact that it is sometimes an amazing blessing, because I get to come at pop culture icons with fresh eyes. Saturday Night Fever’s false reputation is, bizarrely, a kind of protective coating, allowing all newcomers to experience the movie with fresh eyes.

It’s a beautiful, painful film about so many things—growing up, trying to take responsibility for yourself, and, my favorite, becoming a whole and real person. (Look, it’s the world’s first comparison between The Goose Girl and Saturday Night Fever! And, undoubtedly, the last.)

Tony is awful at communicating with words—witness his scene with his ex-priest brother where they dance around why his brother left the priesthood—but dancing? That comes naturally. That comes perfectly. The dance sequences are shot like dreams, and “More Than a Woman,” the routine that ends the film, is so easy to dip into. Through Tony’s eyes (we’re encouraged to look through them in the opening), dancing in a gaudy disco under those lights is pure nirvana. It’s a fun escape at first, but meeting Stephanie makes him see that it could be an actual escape from the macho, sexist, and racist subculture he lives him. This comes to a head at the end of the film, when a Puerto Rican couple outdances them but still loses, not long after Tony and his friends attack the Spanish barons for attacking one of their friends. (An attack, I might add, that meant nothing, because the friend lied about who attacked him.) Tony loses it, handing over the much-desired trophy and winnings and attempting to rape Stephanie.

This is where the film’s dated sexual politics rear their ugly heads.The film does take rape seriously; after Stephanie leaves, Annette, one of Tony’s hanger-ons, is raped by several of Tony’s friends while Tony drives them around. It’s played as the tragedy it is, including Tony’s uncaring “Are you happy now?” to a crying, shaking Annette. The point is that people like Tony and Annette are trapped in these hopeless cycles of violence where they are. But knowing its context does not excuse some of the shadier pieces of how the film treats rape. it is hard to square the film’s lovely, final scene, wherein Tony and Stephanie agree to be friends helping each other out in the big city in her sun-drenched apartment, complete with Stephanie’s “joke” that she’s never let a rapist into her house before, with the traumatized Annette. In the last forty years, I imagine that there’s been some great criticism written on this topic, and I would love to get my hands on it.

Saturday Night Fever is a beautiful film, capturing both the florescent dullness of Tony’s day job, the grimness of the urban landscape that he and his friends move in, and the sheer wonder and joy that Tony derives from dancing. The climactic dance sequence to “More Than a Woman” is exactly how I like my cinema: transportive. It’s almost a greater feat now, since we’re removed by just about four decades from Tony’s moment—nostalgia, rubbernecking, and sheer time all threaten to throw up a wall between us and this moment. A lot of this comes from the killer soundtrack, which remains one of the best-selling soundtracks of all time. It’s just integrated so well into the film. Growing up in the late nineties and early aughts, I have seen my fair share of ham-fisted soundtracks, so it was honestly a relief to see that the soundtrack that started the trend do it so very well.

Bottom line: Saturday Night Fever is a beautiful, transportive, and painful film about growing up and becoming a whole person despite your circumstances. The sexual politics of the film deserve analysis, of course, but “More Than a Woman” is a magnificent moment in film.