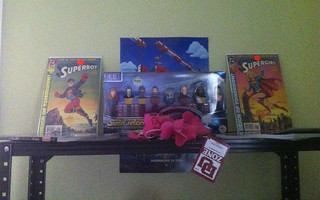 It’s been an exhausting week here at the Floating Domicile, as said Floating Domicile has moved to a new address. But for the first time since leaving Georgia, I have a trophy shelf once again, which I’ve realized is a key part of a place feeling like home for me. Featured on this abbreviated traveling trophy shelf are my copies of Superboy and Supergirl, my LEGO Movie poster, the start of a collection of film books about hilariously bad movies (Eragon and The Mortal Instruments: City of Bones), and my new Star Trek: The Next Generation PEZ Dispensers.

Here’s the synopsis and first promotional image for Agent Carter.

I like my Doctor Who fancasts to pay attention to time period—mostly because Honor Blackman would have been an amazing Doctor—and location, but this one proposes Meg Ryan as Six. I’m intrigued.

At The Believer, the always amazing Anne Helen Petersen talks the history of celebrity profiles.

A recent episode of Louie, “So Did the Fat Lady,” features a lovely fat woman and her struggles. Libby Hill at the AV Club offers some commentary:

But the answer is simple: Society (and, by extension, pop culture) accepts a woman who is fat so long as she is cowed by it. It doesn’t wish to be reminded of a fat woman’s sexuality, nor does it want to see an imperfect female body nude. It will embrace fat women who accept their weight, so long as the women understand that it is inherently hilarious that they are fat and that other people have a right to ridicule them about it. That’s what it all means.

A trailer for Travis Beacham’s Hieroglyph, the only project set in ancient Egypt of late that remotely features actors of color. A intrepid white dude is still the lead, but Beacham did write Pacific Rim, wherein our strapping young American hero is, in fact, the sidekick to the movie’s actual protagonist, Mako Mori. I’m leaning towards trusting him. Also: ancient Egypt, supernatural activity, beautiful people, and John Rhys Davies? It’s on, baby.

Scream! How did I not hear about Long Hidden, an sf anthology devoted to historical stories about marginalized peoples? It is all that I want.

John Seavey at MightyGodKing makes the very salient point that Star Wars’ longevity as a franchise was born when West End Games purchased the rights and produced a game setting out of the material:

And they did exactly what a game company does. They systematized and organized the fictional universe. Star Wars went from being three movies and a handful of ancillary material, all of which revolved around the adventures of a few specific people as they battled a few specific antagonists, to being a complete fictional environment that you could immerse yourself into for a few hours at a time. Things that Lucas had glossed over were given depth, weight and texture in order to satisfy people who wanted to play that weird looking thing in the back of the Mos Eisley Cantina. Vague mystical powers were given rules and rationales. And most importantly of all, you could enter that universe yourself. You could join in. It held a tremendously powerful allure for the Star Wars fanbase that was still out there and that wasn’t being served anywhere else.

Channing Tatum is for sure playing Gambit in an unspecified X-Men film. Alright. Fine.

Check out the trailer for ABC’s musical comedy fairy tale, Galavant. It looks fun and silly, and features Karen David in a major role as Princess Isabella! Huzzah!

I fell down a Jem and the Holograms hole this week. Learn everything you could possibly want about that franchise at Jem Vs. Pranceatron and Rock Jem, which consumed me for a day and a half.

Roberto Orci is directing Star Trek 3. Given how he’s treated Star Trek fans in the past, I think I’m gonna pass on this one. Devin Faraci at Badass Digest also points out that a male writer with no previous directing credits is being selected over women who have actually directed, which means that Hollywood now has no excuse for not hiring women, not even thin resumes.

Alan Kistler dropped by the Mary Sue to teach us the history of LGBT representation in comics, from the early days to now.

An animated adaptation of The Little Prince will be coming to screens in 2015.

Arcade Fire’s video for their song “We Exist” is a short film starring Andrew Garfield as a genderqueer kid trying to figure it all out.

ABC is doubling down on new fantasy with the new reality show The Quest, which is essentially LARPing with traditional reality television contest rules. I am mildly interested.

Purchased: None
Added: Watching TV by Harry Castleman and Walter J. Podrazik (via the AV Club), Long Hidden, edited by Rose Fox and Daniel José Older (via tumblr), Fat Girl in a Strange Land, edited by Kay T. Holt and Bart R. Leib (via Long Hidden), X-Men: Season One by Dennis Hopeless (via Rachel and Miles X-Plain the X-Men)