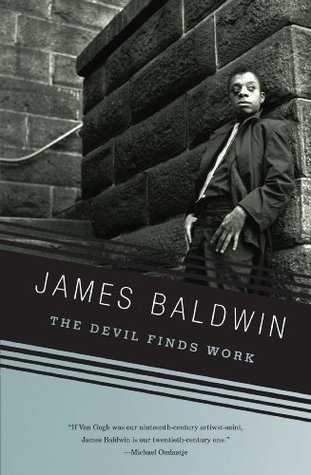 I can’t decide if my reticence in calling The Devil Finds Work more than “just” film criticism lies in my astonishment and admiration for the sheer breadth of of the essay or a falsehood I’ve internalized somewhere that criticism cannot get too far afield from the text it’s critiquing. The first is, if problematic and exceptionalizing, a product of my aching love for this essay; the latter is something to work on. Late in the essay, the reader is asked to question the motives of filmmakers adapting material: “What do the filmmakers wish us to learn?” (112). And the answer, no matter the text, will necessarily engage the reader with their culture and its deepest assumptions, values, and fears. Calling The Devil Finds Work more than film criticism implies that criticism shouldn’t be striving for that truth.

So The Devil Finds Work is a book-length essay of intensely personal film criticism by James Baldwin, first published in 1976. The date is important because Baldwin watches film march on from the thirties to the seventies; he starts with an early memory of Joan Crawford in Dance, Fools, Dance and ends by neatly but passionately dissembling The Exorcist. But Baldwin’s sharp eyes aren’t limited to his own lifetime—his discussion of In the Heat of the Night and Guess Who’s Coming to Dinner start with a reflection on The Birth of a Nation and its central role in American filmmaking. Through these films, Baldwin takes the politics of race and sexual orientation into his hands and exposes how the American cinematic eye treats them and lies to its viewers.

This book came into my hands after The Atlantic’s Noah Berlatsky declared it “The Most Powerful Piece of Film Criticism Ever Written,” an argument for criticism as an art form. And I am inclined to agree. I’m not sure where to start about The Devil Finds Work because there’s just so much packed into its slim page count that is painfully true, revelatory, or both. To expand on all of it—well, you’d be better served by actually reading the thing, because my praise cannot effectively express all of its pessimistic glory.

So I’ll start with the medium film was ultimately born out of—theater. As a young child in Harlem in the 1930s, Baldwin attends a performance of Orson Welles’ legendary Voodoo Macbeth. It stunned the young Baldwin: “There is an enormous difference because the first time I ever really saw black actors at work was on the stage: and it is important to emphasize that the people I was watching were black, like me. Nothing that I had seen before had prepared me for this—which is a melancholy comment indeed, but I cannot be blamed for an ignorance with an entire republic had deliberately inculcated” (29). The unique connection between actors and audience in the theater is a magical one for Baldwin, because it is “flesh and blood corroborating flesh and blood—as we say, testifying” (63). The reason representation is so important is because it corroborates your own existence, and, for Baldwin, the theater is a challenging space where the imagination of the actors and the imagination of the audience are in balance.

But, in his eyes, not so in film. On the actor Canada Lee, Baldwin says, “his physical presence, like the physical presence of Paul Robeson, gave me the right to live. He was not at the mercy of my imagination, as he would have been, on the screen: he was on the stage, in flesh and blood, and I was, therefore, at the mercy of his imagination” (34). Film also offers corroboration, but because the camera lens is inherently subjective and Hollywood is a major business, it often corroborates the stories a culture tells itself to excuse its oppressive behaviors. As Baldwin points out, the Red scare flick My Son, John is pretty bald about its own nature, but Guess Who’s Coming to Dinner is plenty problematic, too, patting itself on the back for its progressive racial politics even while it assumes racial prejudices are the same on both sides.

Every facet of this essay is this rich. Baldwin’s expert analysis of England’s imperial impulses; cultural appropriation so that you can have your exotic character of color without actually having to treat one like a human being; the sheer strangeness of the idea that non-heteronormative love must be earned through suffering. Like all great criticism, it’s given me much needed critical vocabulary. There’s a direct through line between my raptures over the platonic kiss at the end of Quantum of Solace and Baldwin’s clear-eyed take on film-ending kisses: “But the obligatory, fade-out kiss, in the classic American film, did not really speak of love, and, still less, of sex: it spoke of reconciliation, of all things now becoming possible. It was a device desperately needed among a people for whom so much had to be made possible” (58).

And the writing is flawless, both intellectually challenging and undeniably natural. The essay ends with the day and place it was finished. It’s so polished that it must have been a labor of love, but I half-believe that Baldwin simply poured his soul onto the page in one go, a religious version of the tired trope of the authorial epiphany. I haven’t felt this way about a writer’s style since encountering Tom Wolfe two years ago, and that is a high, high compliment. I leave you with Baldwin’s definition of revelation, which he, I, and probably you all seek through art:

The word “revelation” has very little meaning in the recognized languages: yet, it is the only word for the moment I am attempting to approach. This moment changes one forever. One is confronted with the agony and the nakedness and the beauty of a power which has no beginning and no end, which contains you, and which you contain, and which will be using you when your bones are dust. One thus confronts a self both limited and boundless, born to die and born to live. (118)