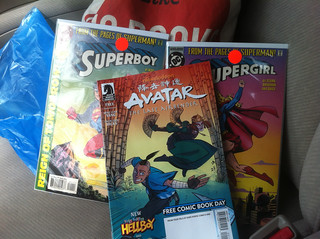 Happy Star Wars Day, cats and kittens! I hope Lupita Nyong’o gets announced for the new movie today—we should be getting an announcement sometime this afternoon about more casting.

My Free Comic Book Day was a blast. I’d actually never been in Mile High Comics before, as my comics budget is now part of the Operation New York budget. They have a much bigger store on the north side of town that I’d like to visit before I leave. The only free comic I really wanted was the Avatar: The Last Airbender one, so mission accomplished! I also picked up the 1993 debut of Superboy, because it was eighty cents and I have the deepest affection for original flavor nineties Kon. I got the corresponding Supergirl, although I didn’t pick up Steel, the third Reign of Tomorrow title. This is all back from when Superman died in the early nineties, by the way.

Warner Bros. and DC will be making a Justice League movie… directed by Zack “Grimdark” Snyder. They’re actually trying to be the Bizarro version of the Marvel Cinematic Universe. (And yet, this still won’t have as many characters as X-Men: Days of Future Past.)

Avicii’s video for “Addicted to You” features a pair of bankrobbing girls in love. It ends tragically, unfortunately, but it’s a gorgeous video.

Storium is a game that streamlines traditional online roleplay, with some twists and turns. Sounds interesting.

This interview with The Lost Art of Dress author Linda Przybyszewski points out the beginnings of “normcore” or intentionally sloppy dress:

Realize, too, that men were wearing dark suits. In the 18th century, it was basically court wear: bright colors, embroidered things. That’s what you would have seen in Britain. And the colonists who had money wore those kinds of things, too. And then with the American Revolution, you get a sort of emphasis on plain dressing men, brown suits because they’re not aristocrats. That anti-aristocratic urge gets confirmed in the early 19th century with these dark suits.

The contrast between men on the streets in dark suits and women of the streets in bright clothing would have been particularly noticeable. So if the middle-class woman was in the street, she wanted to wear dark, unobtrusive clothing because she was not trying to get men’s attention.

That leads me to another question. I don’t know if you’ve heard of this term normcore?

Oh my God! I saw that in The New York Times!

What’s interesting is you just said there was this movement to not look aristocratic, and I wonder if you think that that’s maybe a driving force behind normcore? We’re trying not to look elite?

I don’t even know. I just read the one article, so I couldn’t tell you.

“Stayin’ in Black” is a mashup of “Stayin’ Alive” and “Back in Black.” It is beautiful.

Net neutrality is under attack—io9 breaks down exactly what’s happening and why it’s awful. Take action by signing this petition.

We Need Diverse Books is a movement and hashtag that took Twitter by storm this week, trying to prove to publishers that there is an audience for books featuring diverse characters.

Caroline Siede at the A.V. Club responds to recent criticisms of the Bechdel test:

There seems to be a growing misconception that any film that fails the Bechdel test is inherently “bad.” If a film fails the test it simply means female characters have no meaningful presence outside of their interactions with men. That could be because a film treats women as sexual objects (the James Bond franchise), it could be because the film depicts a few isolated women struggling to find a place in a male-dominated world (The Lord Of The Rings), or it could be because the film is simply telling the story of a group of men (Saving Private Ryan). These examples offer vastly different depictions of women and one could argue for their success or failure as “feminist” stories. What the Bechdel test does tell us is that these films are not interested in showing women interacting with other women, and that is on par with a larger trend in Hollywood.

Janet Mock turns the tables on a cis female interviewer by asking the interviewer the same invasive questions Mock faces because people think trans women need to “prove” their womanhood via physical signifiers. Awesome. The tumblr Questioning Masculinity does a similar thing, posing questions asked of trans men to cis men, which is really interesting.

Baz Luhrmann might be directing an Elvis biopic. I have the strangest relationship with Luhrmann’s films—they execute his bonkers visions so precisely that it’s hard to criticize them—so this intrigues me.

Hugh Jackman says that he might be done playing Wolverine in the near future. The Dissolve points out that we’re just about to hit the end of a few contracts in superhero films, which means that parts might be recast, a la James Bond. (I mean, this will definitely happen for Captain America, once Chris Evans finally escapes purgatory.) I just wonder how this will be done–reboots? Straight up recasting? Alternate universes?

True Detective director Cary Fukunaga is signed to adapt and direct a film adaptation of The Black Count. POUND. THE. ALARM.

The television adaptation of Lev Grossman’s The Magicians has been picked up by SyFy!

The Danish Girl, a film about one of the first trans women to undergo sexual reassignment surgery, has a lead! …and it’s Eddie Redmayne, who, you may recall, is a cisgendered gentleman. Oh, come on.

The White House has launched its 1 is 2 Many campaign, aimed at ending sexual assault by taking men to task. As Feministing points out, it’s a bit reductive—sexual assault is not universally perpetuated on men by women, it assumes a gender binary, and women don’t need to be related to you to deserve living an assault-free life—but it is a massive step in the right direction.

Who is going to replace the stunning Craig Ferguson on the Late Late Show? The A.V. Club speculates. CBS, the only white dude you’re allowed to hire is John Hodgman.

Jemaine Clement and Taika Waititi’s latest project is What We Do in the Shadows, a mockumentary about three vampires living together and attempting to cope with the modern world. I have one word: swearwolves.

After the harassment Janelle Asselin endured at the hands of Comic Book Resources’ forums, executive producer Jonah Weiland has decided on the nuclear option: starting the boards over from scratch, enforcing more inclusive moderation policies, and telling said harassers to get the hell out of comics fandom, because they are not wanted. Bless!

At The New Yorker, Junot Díaz talks about his experiences with MFA programs as a man of color:

To fast-foward: in the end I became a published writer and one of the first things I did with that privilege was join some comrades to help found a workshop for writers of color. The Voices of Our Nation Workshop. A kind of Cave Canum, but for all genres and all people of color. Something right out of my wildest MFA dreams, where writers of colors could gather to develop our art in a safe supportive environment. Where our ideas, critiques, concerns, our craft and, above all, our experiences would be privileged rather than marginalized; encouraged rather than ignored; discussed intelligently rather than trivialized. Where our contributions were not an adjunct to Literature but its core.

Check out that sweet mural from the Smithsonian exhibit in Captain America: The Winter Soldier. And by check out, I mean weep, because they specifically went out of their way to include an image of Bucky and Steve laughing over a picture.

“Summer Dress” is July Talk’s latest single, from their upcoming EP. I adore them and their grungy, mid-century, snarling, sweet sound.

Tyler F. at SharcTank takes down the top five excuses people give for not having gender diversity in their stories.