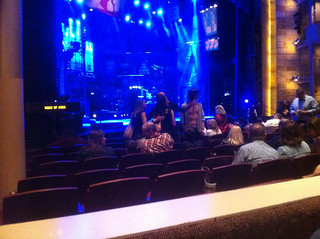 The turnaround from seeing the billboard informing me that the national tour of Rock of Ages was rolling through this weekend and seeing it was disorientingly quick, but I am so, so happy that I finally got to see the actual musical upon which one of my favorite bad movies is based. It’s a whole different beast and I loved it, one or two very offensive jokes aside.  I really needed to get caught up in something, as I’ve been really in my head as of late.

On the reading front, I’m making my way through The Wind-Up Girl, which is different than what I expected.

medievalpoc tackles A Song of Ice and Fire and the argument that, since the series is based on history, it would be supposedly inaccurate to include people of color. That’s total bull, of course, and there’s something unsettling about Martin arguing that, while the Dothraki, based on the Mongols, are reduced to a lot of rape and pillaging, despite the Mongols’ actual cultural practices. (They then go on to shut down the latest flood of hate—“It’s just a fantasy novel!”—beautifully.)

And onto this past week’s other huge Game of Thrones controversy—Jaime raping Cersei in last Sunday’s episode, despite the same scene being consensual in the book. (Because having incestuous sex in a church next to the body of their dead son wasn’t shocking enough?) Sonia Saraiya at The AV Club examines that scene in the context of adaptation and the show’s exploitation of female bodies:

There have been other thoughtful, great reactions, including Sarah’s takedown of the comments to Saraiya’s article at Tea Leaves and Dog Ears, Memory pointing out that Jaime is one of the very few characters who is explicitly against sexual violence, making this scene a total betrayal of the character, Genevieve Valentine’s identity politics piece, and The Mary Sue’s roundtable on the subject. The official response from the show and from George R. R. Martin is predictably maddening.

Tumblr user iamthedukeofurl points out that, in the Peggy Carter story, Steve Rogers got fridged. (Or freezered, to be more precise.) Oh, Marvel Cinematic Universe! It’s not even my birthday!

Screenwriting duo Kurtzman and Orci are breaking up to focus on different projects. Orci is lobbying to direct Star Trek 3 (…given Orci’s stance towards Star Trek fans, this is not a desirable outcome), while Kurtzman wants to direct the Spiderman spin-off Venom. But fear not: Sleepy Hollow is still in joint custody.

A vendor at WonderCon sold a t-shirt declaring “I like my fangirls how I like my coffee… I hate coffee.” The wonderful Greg Rucka responds explosively, especially because his young daughter is a geek. (The vendors, predictably, missed the point, claiming that “fangirl” is actually an insult because fangirls and fanboys do fandom wrong. Vomit.)

Chris Sims at Comics Alliance talks Harley Quinn: why he likes her as a character, Batman: The Animated Series, and why he thinks she’s never worked in a solo title. I disagree, obviously, but he does make a point that Harley, as created, conceived, and perpetuated by the writers that mishandle her, is as dependent on the Joker as the Joker is on Batman. Interesting read. (Also, how I have missed his column until now? The column where he talks about how Wolverine’s fetishization of Japanese culture means that Ol’ Snicktbub has plenty of opinions on anime is genius.)

And while we’re talking comics, the new podcast Rachel and Miles X-Plain the X-Men is exactly what it says on the tin. Rachel and Miles are longtime X-Men fans and pretty awesome people in general—their discussions include Marvel and speculative fiction’s reliance on allegorical diversity instead of actual diversity, Silver Age insanity, the inner workings of Stan Lee, and why Charles Xavier is a jerk. (FACT!)

The FCC is considering allowing “fast lane” websites—i.e., corporations who can pay Internet service providers will be able to have their websites load faster. This is a huge threat to net neutrality, so I hope it doesn’t happen.

In a pretty awesome oral history of the show at Wired, Joel Hodgson reveals that he thinks Mystery Science Theater 3000 is ripe for a reboot, since the premise is the thing, not the characters. Given that riffing has become a pastime because of MST3K to the point of professional troupes (and amateur, including my college one), I think this is a fantastic idea.

The last Hobbit film has been renamed The Hobbit: The Battle of the Five Armies. So I assume the first three hours will just be the battle.

Cyborg’s going to be in Batman Versus Superman. I guess they’re trying to vie with X-Men: Days of Future Past for most overcrowding? But I don’t think anyone can actually compete with the X-Franchise…

At a World Book Night/Rediscovered Books event, a young lady was handing out copies of The Absolutely True Diary of a Part-Time Indian, a book banned in her school district. Parents called the cops on her. Thankfully, the cops were superconfused as to why they were there, but still: baffling.

At The Atlantic, Hanna Rosin examines overprotective parenting. I was a very sheltered child who grew up in a middlingly pedestrian-friendly town, so I know and have personally experienced a lot of what Rosin talks about. But I had to pause in recognition when Rosin points out that children these days always assume someone is watching them.

Hunter Oatman-Stanford at Collectors Weekly interviews Matt Wolf about his new documentary, Teenage, which is about the development of the teenager as a social status. I’m dying to see the film and read the book it’s based on, so the interview is very interesting.

If I love something, I will research it into the ground, which is how I discovered this massive documentary about the creation of Rock of Ages. The talking heads can get repetitive, but then, it does run three hours. I’m just approach the end of hour one, and I find it really fascinating, especially how it inadvertently reveals why the film adaptation flopped (it betrayed the main message of the stage show).