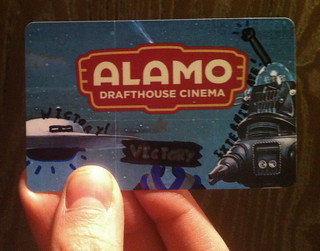 So, um, things look different around here. (And I don’t mean my decorated Alamo Victory card.) I’ve been meaning to update my layout and start using the one good photo of a book cake I had last year as my header, but I decided that the best time to do that was Friday night right before bed. Still, I’m very happy with it: sleek and easy to read. There will be other tweaks in the next week or so as I find time to do them.

Otherwise, this has been a pretty relaxed week for me. I got a lot of me work done on Monday, so I feel like I’m on top of things again. I read Ever After High, Afrofuturism, and The Final Solution this week.

SCREAM! Maya Rudolph and friends filmed a variety show for NBC last year and it’ll be airing sometime next month. One of said friends? The Electric Lady herself, Janelle Monáe. I am weak with anticipation.

ABC’s Agent Carter comes closer and closer to being reality. The pilot might get picked up with the next season of Agents of SHIELD. I am still crying over Captain America: The Winter Soldier (and occasionally punching Renay in her Captain America: The Winter Soldier feelings bruise with eighties music), so this just makes me even more excited. Marvel has been doing such wonderful things with this particular story, and, of course, Peggy Carter is the greatest.

Everybody in Noah, a film whose setting is either way in the past or way in the future, is white! Screenwriter Ari Handel claims that this is so the audience doesn’t get distracted by race… because nobody would get distracted asking why there are only white people in the distant past or the distant future? Garbage.

Colleen Coover celebrates women in comics with the wonderful ladies of Marvel in this cute comic.

Why I am not following NPR’s Code Switch religiously? This article on race in World of Warcraft is fascinating.

Here’s the last trailer for X-Men: Days of Future Past, which promises some seventies heist goodness and Charles and Erik working out their issues via beating each other up, which I am always about.

Green Lantern: The Animated Series producer Giancarlo Volpe has created a comic about his experience focus grouping the show, which was cancelled after poor toy sales.

The Metropolitan Museum of Art started off April by highlighting Supersisters, a trading card series from 1979 focused on awesome ladies. We should totally bring this back!

I am fascinated, in our instant gratification culture, when I find truly lost artifacts. To this end, Simon Brew at Den of Geek rounds up completed films that have never seen the light of day.

If Gusteau’s is in Cars 2, does this mean my hate theory that Cars takes place after the cars have killed all the humans is corrected? I am burdened with tragic knowledge.

Hot Topic, dresser of middle school goths everywhere, is doing a Maleficent line to tie in with the new movie. The clothes are very The Craft, but I am all about this horned headband. I want to bring wimples back with it.

Channing Tatum is in talks to play Gambit in a future X-Men movie. I picture Gambit a little lankier, but hey, Tatum has a great sense of humor, so let’s see where this goes.

Did you know MySpace does journalism now (and, you know, still exists)? They do, and this oral history of All That is really interesting. (And better than Slimed, the earnest but mildly incoherent oral history of Nickelodeon I read recently.)

DreamWorks’ next feature will have a girl of color as the lead! Huzzah!

Jill Pantozzi at The Mary Sue talks about harassment for female journalists covering geek topics and how to stop it. In short: shun. Shame is a powerful social tool! Use it to your advantage.

The Fat Nutritionist drops some knowledge on the #NotYourGoodFatty Twitter hashtag, collected here on Storify:

People are mad at me because they ‘work so hard’ to be fit or lose weight. They have told me this explicitly. It implies that they think my rejecting the values they subscribe to can somehow take away the fitness they’ve worked for. That is totally delusional. If you’ve worked hard for fitness, no amount of fat people rejecting stigma can take that away. So this is obviously not actually about fitness, at all. It’s about the other thing they ‘worked hard’ for: social status. They DO think, and they know, that the social status they have worked hard to earn, through ‘fitness,’ can be devalued. It can be devalued if the hierarchy that rewards them is crushed. Crushed by people rejecting stigma. We can’t take away your fitness or whatever weight you’ve lost. But we can devalue those things by destroying fat stigma. So they are afraid of us, and for good reason. If fat people aren’t stigmatized, then there is no more thin privilege. Remember always, fat people: People are afraid of you because you have an awesome power – to destroy the hierarchy. If they were not afraid of losing their place in the hierarchy, they would not come after you so viciously.

Oh, yeah, Clint Eastwood is directing the film version of Jersey Boys. I love that musical and the film promises to break the fourth wall a lot, so I am down.

The astonishing thingswithwings reflects on Captain America: The Winter Soldier, its ambiguous politics, and the evolution of Nicholas J. Fury. Genius.

The Once Upon a Time crew would love for Kristin Bell to guest star on the show as Anna! And so would she. How they’re going to do this, I’m not exactly sure, but if anything doesn’t particularly care about how things cohere, it’s Once Upon a Time. Bring it!

I present Spiderman and his baby self having a dance off to sell bottled water without comment.

A Doctor Who fan proposed to his girlfriend during a photo opportunity with Karen Gillan and Matt Smith. Adorable!

At Autostraddle, Emily talks about social skill classes aimed at people on the autistic spectrum and how they can perpetrate a heteronormative worldview.

“Building a Bigger Action Hero” is all about the physical extremes expected from actors in action franchises, to the point that Gerard Butler in 300 caught shade from the extras for daring to, you know, enjoy food. The point that male bodies are now just as objectified as female bodies onscreen is pretty laughable (male bodies are now objectified as power fantasies, not sexual objects), but it really makes an impact.

What’s fertile in a wound? Why dwell in one? Wounds promise authenticity and profundity, beauty and singularity, desirability. They summon sympathy. They bleed enough light to write by. They yield scars full of stories and slights that become rallying cries. They break upon the fuming fruits of damaged engines and dust these engines with color. And yet—​beyond and beneath their fruits—​they still hurt. The boons of a wound never get rid of it; they just bloom from it. It’s perilous to think of them as chosen. Perhaps a better phrase to use is wound appeal, which is to say: the ways a wound can seduce, how it promises what it rarely gives. My friend Harriet put it like this: “Pain that gets performed is still pain.”

Flor Edwards shares her experience growing up in an apocalyptic cult and her family’s steps towards recovery at narratively.

At The Jacobin, Miya Tokumitsu dissects the ideology of “Do what you love”:

In ignoring most work and reclassifying the rest as love, DWYL may be the most elegant anti-worker ideology around. Why should workers assemble and assert their class interests if there’s no such thing as work?

The Hugo Award finalists were announced yesterday! I’m excited to see Strange Horizons nominated for Best Semiprozine, both because of their amazing work and because I’m one of their first readers. I’m also happy to see The Book Smugglers nominated for Best Fanzine, Foz Meadows for best Fan Writer (although I also think we should keep nominating Gavia Baker-Whitelaw every year until it just reaches critical mass because she is a genius), and Kameron Hurley’s amazing “We Have Always Fought” at A Dribble of Ink for Best Related Work. The more mainstream categories are dominated by Doctor Who and Game of Thrones, but I do hope either Gravity or Pacific Rim wins for Best Dramatic Presentation (Long Form).

X-Men: Days of Future Past director Bryan Singer has been accused of sexual assault. He denies the charges, but it’s not about the answer, it’s about the question being asked in the first place. I’m waiting to hear more on this story as it develops, but I spent Thursday just cringing. I don’t want to throw money at something directed by a rapist.

Purchased: None
Added: Rat Queens: Sass and Sorcery by Kurtis J. Wiebe and The People’s Platform by Astra Taylor (via the Awl)