Ever After High: The Storybook of Legends by Shannon Hale

Have I mentioned that I’m in stupid love with Monster High? Something about that doll franchise’s blend of adorable monster girls, increasingly outrageous fashion, and atrocious puns just makes me happy. The webseries’ emphasis on friendship and occasional horror certainly helps, such as designated mean girl Cleo being actually fiercely protective of her friends or Frankie Stein creating a voodoo doll boyfriend to impress her friends—who reveals his sentience by running off screaming after she’s dumped him in the trash. The franchise has been a hit with both adult collectors and the actual target audience. Mattel saw more money in them hills and spawned Ever After High, which is the same concept, but with the children of fairy tale characters in high school instead of the children of classic horror characters.

I still prefer Monster High—the Ever After High dolls have disconcertingly childish heads—but the former franchise’s webseries and movies don’t over any overarching narrative. Rather, what interests me about Ever After High is the franchise’s main conceit: the children of fairy tale characters must repeat their parents’ stories verbatim, lest they perish. Their pledge is sealed on Legacy Day, when they sign their names in the titular Storybook of Legends. Obviously, some of the kiddos rebel and refuse, led by Raven Queen, the daughter of the Evil Queen, leading to the franchise’s cliques of Royals and Rebels.

It’s mostly used to generate teenage conflict—a Royal and Rebel are dating, quelle surprise—but comes with a fascinating side of existential ennui. When Apple White learns that her best friend Ashlynn is dating someone from another fairy tale, she both despairs that Ashlynn never trusted her enough and that Ashlynn could face complete oblivion for going off-script. Because it’s what she wants, she just can’t fathom anything else. Raising the familiar stakes of teen drama to how they actually feel is nothing new; Buffy the Vampire Slayer makes literal the idea that high school is hell. But Ever After High also explicitly asks and grapples with questions about agency in a metatextual way, despite being seemingly aimed at a younger audience than Monster High. The webseries even features a pair of dueling narrators and the character of Madeline Hatter possesses the ability to break the fourth wall.

Which is why the novelization appealed to me. Unlike the other tentacles of the franchise, it needs to actually mine all those questions. Plus, it was written by Shannon Hale, a new favorite of mine.

Unfortunately, it doesn’t really feel like Hale wrote it, save for a cute exchange where Apple and Raven say boo back to a ghost, because it’s just the polite thing to do. Because Hale is adapting a pretty haphazardly written story with the worldbuilding done for her, she can’t actually stray too far from the company line. The atrocious fairy tale puns abound (to my delight), but it occasionally feels as sloppy as The School for Good and Evil.

So, as a novel, it’s pretty flat. But as a piece of metatext, it’s far more interesting. Hale can expand in some places. Raven’s mother played her part too well, resulting in mass destruction and her imprisonment. This includes the destruction of Wonderland, which darkens Raven’s friendship with Maddie to a certain degree. The bulk of the novel focuses on Raven’s frantic search for any evidence that refusing to pledge doesn’t end in instant death. It’s implied that the characters need to perform their stories in order to inspire humanity. And Madeline often has personal chats with the narrator in order to move the story along. But without any resolution (which it may never receive), there’s nothing more to analyze.

But it does ask why we tell stories, and that’s hugely important. Fairy tale deconstructions have a lot of currency in children’s fiction, but it’s often framed as the real story behind the fairy tale or grounding the fairy tale in reality. However, fairy tale deconstructions with metatextual bents like this are on the rise, and reading stories about stories is the first step towards engaging with stories critically. If a little girl learns to ask why a story is being told the way it’s told from her favorite doll, I am one hundred percent for it.

Especially if that doll is the world’s tiniest goth. 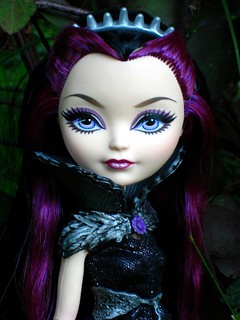 Bottom line: Ever After High: The Storybook of Legends is a cute and kind of forgettable piece of supporting material for the doll franchise—but it does ask some very good questions that help sharpen kiddos’ critical facilities.

5 thoughts on “Review: Ever After High — The Storybook of Legends”