How To Be Gay by David M. Halperin 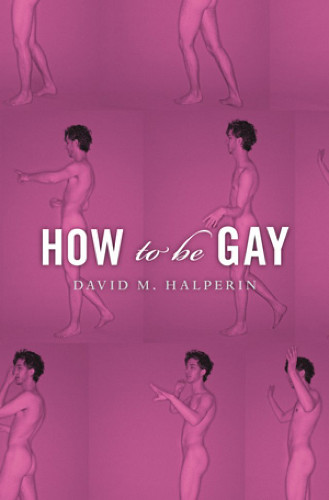 In the traditional queer narrative, going off to college is a big event. Depending on how active your high school’s GSA was, you either are finally meeting more than three other queer people or finally meeting queer people you don’t remember from childhood. But, despite my initial enthusiasm, I never quite connected with the queer groups on my college campus. Setting aside that one person who treated me as if I were a very stupid Hummel figurine prone to spontaneous combustion, they were a fine group of people. But we never really clicked. There was a cultural barrier between me the geek and they the partiers that couldn’t be breached. Eventually, I did find my fellow queer geeks, but that cultural shock stuck with me. Despite my outstanding credentials (Exhibit A: a notebook emblazoned with “Mrs. Joan Watson” in glitter), I wasn’t, apparently, queer enough.

Which is exactly why something entitled How To Be Gay caught my eye and imagination. I’ve experienced the dichotomy between actual same-sex desire and same-sex culture myself. As author David M. Halperin points out, there’s nothing inherently homosexual about stereotypically gay interests like musicals, interior decorating, or diva worship, but the stereotype is still proven over and over again. Gay male culture (Halperin speaks only to gay male experience in America) and gay male sexuality are two different beasts. So where did the stereotype come from in the first place?

Halperin posits that gay men have long resisted the heteronormative narrative surrounding them by queering it—by finding themselves not in strapping action heroes but in larger than life female performers, by exaggerating gender performance to point out that it, like all social interaction, is a performance, and by using melodrama as an equalizing weapon. These coping mechanisms cultivate a certain critical eye that can, roughly, be associated with the creative arts. (As Halperin points out, you do not actually have to be gay or male to participate in gay male culture.) Of course, all this has roots in a pre-Stonewall era when queering the mainstream narrative subtly was the only way to see anyone like you at all. But what about now, very post-Stonewall, when marriage equality is on the rise and kids are coming out younger and younger?

Well, Halperin provides a pretty dim view of modern gay life, highlighting its distaste for gay culture and its worship of the traditionally masculine. (Weirdly, Halperin happily punctures the idea of traditional masculinity as natural but seems to subscribe to traditional femininity being inherently unnatural, despite championing femme behavior.) He does this on purpose as an experiment in bias, and he certainly succeeds. But it also makes sense in the context of a queer rights movement that promotes the image of queer folk being totally “normal” (read: just like straight people!) besides dating people of the same sex. If the idea is that being queer isn’t a choice has currency, than the idea that traditional gay male culture is a thing of the past, now that gay men have access to representations of themselves, has currency as well. If we live in an open and tolerant society, then this specific culture, so rooted in the mid-twentieth century, is hopelessly dated.

But that’s not exactly true, because we don’t live in an open and tolerant society. A Michigan woman recently celebrated her nuptials with her lady love, only to be attacked for being gay nine days later. And while Halperin believes we’ll one day be past violence such as this, he still thinks that the gay male, being inherently a minority, will still always have to navigate within a heteronormative culture, making queering mainstream texts and other subversive behaviors towards consuming culture eternal. It’s not enough to have something small made for you, the thinking goes; it’s enough to have the mainstream culture, in whatever small way, acknowledge you.

It’s all fascinating—I’m especially intrigued by Halperin’s argument that the fracturing of the monoculture has robbed gay communities of the political zeal of the seventies and eighties—but frustratingly long-winded. Halperin faced a lot of backlash from critics about teaching a course by the same name. Instead of brushing off the haters, Halperin feels compelled to answer them at every turn. It seems nicely comprehensive at first, but it soon turns into a self-soothing gesture every five pages as he apologizes for not being the right person to teach this material or fantasize about what a different book about gay male culture would look like. It makes for tedious sections peppered with interesting insights that I don’t always agree with, but I was delighted to grapple with. If only it was about one hundred pages shorter…

Bottom line: How To Be Gay questions the connection between male homosexuality and gay male culture—two very different things. It’s all fascinating, but Halperin spends too much of the book apologizing to his critics. For those interested, but only if they’ve properly girded themselves.