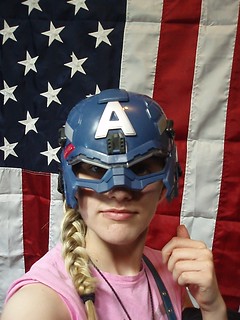 It was my birthday on Wednesday! I celebrated in style by going to see Captain America: The Winter Soldier at the Alamo and crying for an hour of its running time from emotions. Good times.

I like how people are framing the face that Captain America 3 will be competing against Batman Versus Superman at the box office in 2016 as Marvel challenging DC. It’s really just Marvel rubbing their success in DC’s noses.

Debbie Harry has come out as bisexual! Her role model status for me has gone up by about 50%.

Chiwetel Ejiofor is being considered for the next Bond film’s villain. I think he’d do smashingly, but think how much more smashingly he’d do as Bond…

At The Mary Sue, Amy Ratcliffe considers shows that outstay their welcome, despite (or even because) of fervent fandoms. So, yes, she’s talking about Supernatural.

Veet’s new ad campaign extolls women to shave their legs and armpits in order to not risk becoming dudes. It was immediately pulled down because people hated it. Setting aside the epic transphobia and homophobia inherent in the ad campaign, it boggles my mind from an advertising standpoint, because it’s so blatantly transparent that they have to generate a reason for you to purchase their product. And that reason is not a bland “you’re worth it!” or “enjoy your skin!”, it’s literally “BE ASHAMED THAT YOU ARE A MAMMAL!” (I have always found it hilarious that a culture that elevates breasts to the status of, essentially, genital is apparently disgusted by the other trappings of being a mammal.) There are so many other and more interesting reasons to bust the razor out! Shave (pun intended) seconds off your swimming time! Show off your ripped calves! Feel like a classical statue of Athena! Make your legs even after your skinny jeans chafe all the hair off your inner thighs!

The always amazing Anne Helen Petersen talks the rise of Netflix and the fall of HBO in the age of digital access. Relatedly, Brandon Nowalk at The A.V. Club tells us “How (and why) to fight television’s culture’s amnesia.” And Noel Murray at the same publication argues for a Turner Classic Movies for television. This one particularly stuck with me, because Murray argues that single television episodes can be like singles, releasing me from a sense of completionism about classic television.

Booboo Stewart has joined the cast of The Disney Channel’s Descendants as Jay, Jafar’s kiddo. This is included to remind you that this film is going to exist and I am very excited about its undoubtedly poor production values.

Stephen Colbert will be replacing David Letterman on The Late Show later this year. I feel pretty mixed on this. Obviously, Colbert is a national treasure and he’s probably tired of playing “Colbert.” But we’ve had a very unique opportunity lately to remake late night television in our image and it’s still all middle-aged white guys with brown hair.

Quinnae at Border House Blog questions how the Star Wars Expanded Universe manages to specifically mimic our own culture, despite that not really making sense or being explained. She goes on to identify this kind of lazy worldbuilding as “skyhooking”: “the skyhook here is a substitute for any proper social structure that would undergird and properly explain these societies and their particular arrangements of power. Who rules what, and who does what to whom, in other words.” Zaewen offers a perfect example when she deconstructs how matriarchies are usually deployed in gaming.

Rebecca at The Mary Sue coins the term “Moffatsplaining”: it’s like mansplaining, but for creative projects.

The Dissolve’s Movie of the Week this past week was Clueless. Tasha Robinson talks Emma and its two nineties film adaptations, and how Clueless impeccably understands the novel.

The good news: there’s going to be a movie about the Stonewall riots! The bad news: it will be directed by Roland Emmerich! Anonymous was so, so incoherent and melodramatic that I fear this. Here’s hoping I am somehow dead wrong.

Marvel Meta is a tumblr collecting links, comments, and tag meta (oh, what a brave new world of fandom) about the Marvel Cinematic Universe. Highlights include this post about Captain America’s liberal origins (the 1930s were full of social upheaval!), the brilliant “Ghosts in the Machine” about agency, choice, and nations in Captain America: The Winter Soldier, Loki’s misogyny being centered in his own status as a magic using dude in a society where magic is feminized (and thus devalued), the link between said magic and technology in the MCU, and Steven Attewell’s long post about Cap’s left-wing politics in the comics and the films. I am an ocean of tears.

Parts of The Giver film will be in black and white. Thank goodness!

Foz Meadows recalls participating in a trivia contest at a con that saw white, male, straight geeks as the default—her retort is to list off the ladies who invented, among other things, superheroes, science fiction, and the novel. Brilliant.

X-Men: Days of Future Past’s marketing is emphasizing the alternate history route more and more. Enjoy the incredibly depressing story of how we get to the future that must be prevented.

At Grantland, Alex Pappademas examines Nicolas Cage’s career and arrives at some startling truths about just how weird it is to make your living as an actor.