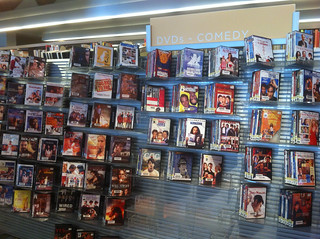 Happy April, dear readers! My birthday is coming up, and I plan to spend it watching Captain America: The Winter Soldier.

Captain Awkward says a lot of thoughtful, paradigm-shifting things to answer a letter writer worried that she’s too boring, but the good Captain nails the main question with this: “Is “interestingness” something you feel you owe other people?”

Fantastic Beasts and Where to Find Them is going to be three movies! We may wonder at precisely what can go on for three films, but if its Misfits actor in 1920s New York for nine hours, I am down.

It took me a little while, but I am all about Ingrid Michaelson’s “Girls Chase Boys” right now (status: cutesy Riker/Troi fanvid about how much they like each other, making out or no. I love those dorks). Plus, the music video references “Addicted to Love” but features a diverse crew of lovelies instead of Patrick Nagel paintings brought to life.

The gentlemen of Good Neighbor (Kyle Mooney, Beck Bennett, and Nick Rutherford) are awesome friends and there’s apparently nothing I love more than comedians with longstanding friendships. Their material is hit or miss for me, due to its low-fi, scattershot, and intentionally awkward nature, but it all works in “Drunk 8th Graders.”

Max Gladstone’s Broader Fantasy Foundations series on A Dribble of Ink has a new installment about The Tale of Genji.

Megan Stielstra at Hypertext talks about essays, passion, and the way we’re killing exploratory writing by teaching essays as a quantifiable thing you can be good at instead of a method of expression. Very necessary.

Lara Zarum gives a crash course on Kate Bush in ten tracks. “Wuthering Heights” is a delight (especially if you, like me, came to it through Noel Fielding) and “Running Up That Hill” is so strange and perfect.

At The Walrus, Rachel Giese writes up WiseGuyz, an inclusive sexual education program for teenage boys in Canada. Inevitably, she also talks about masculinity, sexual politics, and the ways we strand our children. My mother was once loathe to raise her daughter in the Catholic Church; reading this, I discovered myself loathe to raise a son in my culture, an impulse so strong it bypassed my completely disinterest in having children.

Noel Murray at the Dissolve talks about watching films at home versus in the theater, our inclinations towards distancing ourselves from emotionally submerging in films (live-tweeting!), and Pauline Kael. I find this really interesting as someone who likes to submerge before analyzing. I have been noticing that I check out a lot more lately, which is why I value going to the movies so much—the ceremony of it forces me to be one hundred percent there.

Project Runway: Under the Gunn will be doing a Marvel comics challenge sometime soon, with Jaime Alexander, our Lady Sif, guest judging. Obviously, the intersection of superheroes and high fashion is of extreme interest to me, but I’m also curious to see how Project Runway, which I stopped watching Internet eons ago, has survived.

Lucy, wherein Scarlett Johanssen’s drug mule becomes a superhuman quickly losing her grip on humanity, looks amazing. Hopefully, it will do astonishingly well and convince all and sundry that a Black Widow movie is necessary.

At The New Yorker, Emily Nussbaum examines All in the Family, Archie Bunker, and how examining bigotry can, by accident, reinforce bigotry:

Rather than puncturing hatred, [Hobson] argued, Lear had made Archie into a flattering mirror for bigots. “I don’t think you can be a black-baiter and lovable, or an anti-Semite and lovable,” she wrote. “And I don’t think the millions who watch this show should be conned into thinking you can be.”

Adorably, Bon Appétit interviews Captain America for its My Morning Routine feature, combining both shade thrown at Iron Man and my all-consuming envy of everyone, fictional or not, who lives in New York. Soon! Soon.

This week marks the anniversary of Roger Ebert’s death. I still get teary-eyed because I miss him from time to time; it’s always hard to believe that his voice is gone. A group of critics and contributors remember him over at Ebert’s website.

tumblr user unwinona explains the importance of Mary Sues: “Mary Sues exist because children who are told they’re nothing want to be everything.”

Filmmaker IQ is a website that looks into all aspects of film production, so, naturally, I’ll be binging on their output very soon. They recently looked at the history of movie trailers, with a short documentary and an article featuring that documentary’s examples. I had no idea Jaws was the first wide release in America!

Jess Plummer is doing a Shirley Temple Retrospective! It’s awesome, as is all of Plummer’s stuff, but, specifically, the first installment explains “bus schooling” as a concept:

If I were talking about a modern star I’d call it “bus schooling,” a phrase coined by BFF Becky and her sister to describe…I believe it was Justin Timberlake, originally? It’s that veneer of professionalism many child and teen performers have, that preternatural maturity when being interviewed on The Tonight Show or whatever, combined with odd pockets of immaturity about real-life things because they don’t know how to, like, make conversation with a group of strangers their age or sit through a math class that’s not taught by a tutor on a tour bus (hence the name). It comes through in perfectly polished interview answers and a clear awareness that they’re always being watched. Justin Timberlake is a perfect example of bus schooling at its finest, since he’s basically a singularity of irresistible charm and unbridled ego. Selena Gomez is another good example of modern bus schooling; Miranda Cosgrove is so bus schooled she goes too far in the other direction and comes off incredibly awkward; Rachel Crow isn’t bus schooled at all (although funnily enough, she reminds me a lot of Shirley in her expressions). Big Time Rush: bus schooled; One Direction: not bus schooled. Jennifer Lawrence has built a rabid Tumblr fanbase out of “Look how bus schooled I’m not!” That sort of thing.

Marion Zimmer Bradley aided and abetted her husband’s pedophilia. I am appalled.

Purchased: None
Added: The Devil Finds Work by James Baldwin (via The Atlantic) and The Scorpio Races by Maggie Stiefvater (via Ana)