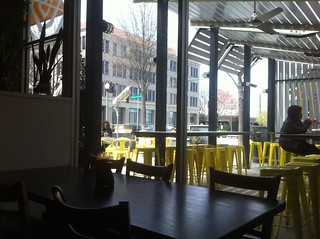 Greetings from Louisiana! I am on a short vacation to spend some time with my extended family. It’s great catching up and eating all the fantastic food, but I do find it hard to sit down for long stretches, so that’s not very helpful. I did get to very briefly visit Atlanta before flying out to Louisiana, which meant heading back to my old stomping grounds in east Atlanta for a hour or two. Back to the grind on Tuesday!

Television Without Pity, the television recap website that codified so much fannish language (the term HoYay originated in its Smallville forums) and forged a path for more active (and hilarious) media consumption, is closing down on April 4th. Its content will be archived—but not for public consumption. This is really near and dear to my heart, because Television Without Pity was a key part of my experience with Heroes, which was my first active fandom. May angels sing you to your snarky rest, TWoP.

My prayers have been answered! “Through the Decades,” an intermittent feature on the Dissolve where Noel Murray and Matt Singer cast iconic characters with classic actors, seems to be becoming a thing. This week’s installment: Indiana Jones throughout the years.

Mark Gatiss teases Jane Austen as a possible “celebrity historical” episode of Doctor Who. On the one hand: Jane Austen fighting aliens is awesome! On the other hand: Moffat. (On the third, mutant hand: anything Peter Capaldi does!) So… here’s hoping? I’m about seventy percent on this idea.

At Feministing, Katherine Cross shares how her experiences with role-playing games (specifically, the inclusive Pathfinder) helped her connect with religion and forge a new path for herself:

In addition to the simple but important communication of gendered diversity and freedom, these characterizations are fertile ground for thinking, in much the same way that Tarot cards help one assess one’s own consciousness in a new light. There’s no magic involved–just the simple act of distancing and reorienting one’s thoughts through exotic imagery and imagination may unearth insights that remain buried when more mundane thoughts occupy one’s mind.

THIS IS GOING TO BE AMAZING. Maybe not good, but definitely amazing. It will feature all of the madness and all of the emotions, so I will undoubtedly be cackling and weeping into my queso at the Alamo come May. (Although Hank being able to phase between human and Beast is silly. The point is that Hank can’t pass, highlighting the fact that movie!Hank hates himself more than he will ever love someone else.)

Recycled Movie Costumes is a tumblr that tracks costumes from their creation to their most recent outing in films. It’s a lovely look into the production of films and television shows, especially if the BBC is involved. (Becoming Jane, which one of my favorite movies because watching Anne Hathaway and James McAvoy make out is just a good time, cannibalized a lot from previous Austen productions!)

Tumblrinas didn’t coin the word “feels”; Georgiana, Duchess of Devonshire, did, back in 1782. HISTORY!

Here’s the new international trailer for Maleficent, highlighting both the original film and Aurora and Maleficent’s friendship, which I am all about.

Comic Book Resources’ The Color Barrier did a two-part interview with Phil Jimenez, where the writer and artist talks representation, gender, sexuality, and Wonder Woman:

I tend to be in the minority when it comes to this, but I was never the biggest fan of heroes who were “just like” me. The characters I love and “relate” to the most were ones I aspired to be more like; who represented goodness and ethics and kindness and self-sacrifice, as well as fun and adventure and a view of the universe that’s bigger than my own. They were reminders to me of the things I felt I should be, because it would make my life better and would make the world better. They were people I looked up to. They were characters who didn’t always affirm the world I lived in, but challenged me to think about how I wanted to live in it, how I wanted to impact it, and with whom. My favorite characters made their worlds better, and therefore, my world better, and whom I believed could do the same for other people like me — giving me guidance, hope, something to aspire to, a world far bigger than my own to dream about, grasp for, live for. So yes, these stories and their characters have had a profound effect on me and I suspect the most important characters to me will always be there in my head, and heart.

At The Atlantic, Noah Berlatsky argues that sci-fi handles race in one of four ways: metaphor, tokenism, diversity, and direct. This reminded me that I need watch Brother from Another Planet soon.

In separate posts on separate blogs, Toni Weisskopf and Brad R. Torgersen consider the future of sf fandom given the current fractured state of general fandom. If sf fandom was previously defined by a set of texts, what do we make of fandoms that have cropped up around non-sf texts and feral fandoms? Both argue that the way forward is that fandom is not about texts, but about engagement. In short: it’s not what you love, it’s how you love it.

This is the only Hercules movie that ever needs to happen. Sorry, Disney, but Dwayne Johnson can do no wrong.

Rod Hilton at Absolutely No Machete Juggling proposes the Machete Order for watching the Star Wars movies: A New Hope, The Empire Strikes Back, Attack of the Clones, Return of the Sith, and Return of the Jedi. I see merit to this argument! Wolfboy will be introduced to the films thusly.

Jodie was kind enough to share her music of the moment, which, somehow, reminded me of this wonderful live performance of Imagine Dragons’ “Radioactive” (status: tragic Khan/McGivers vid ending in her death). I enjoy overproduction, but that can be difficult to reproduce live, so Imagine Dragons doesn’t even try and does something else instead. Smart!

At The Daily Dot, Gavia Baker-Whitelaw discusses Chris Evans’ desire to get out of acting conflicting with his extremely long-term contract with Marvel. It’s an interesting look at the new studio system and the game that actors like Evans and Scarlett Johansson have to play—funding the smaller, intimate projects they want to do with big projects with bigger payouts.

Bob Chipman points out that Baroness Orczy invented superheroes. Like I said: we’ve been here the entire time. (We being lady types.)

Friend of the blog and all around awesome person Renay has been announced as one of the editors of Speculative Fiction 2014! I’m so thrilled for her.

Disco producer Cerrone has disco-fied Haim’s “If I Could Change Your Mind.” Report to the Studio 54 dance floor.

Who didn’t tell me my beloved Harley Quinn made a cameo in Arrow in “Suicide Squad”? Oh, Harley, come back to TV.

At Slate, Canadian composer Owen Pallett breaks down why “Get Lucky” is an awesome song with music theory. I mean, it’s obviously one of the greatest songs ever written, but if you want to know why, Pallett’s got you covered.

Acquisitions
Purchased: None
Added: None