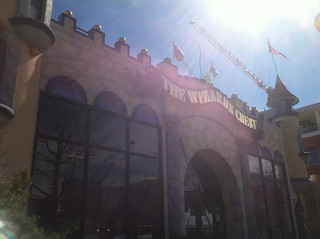 Will spring ever, well, spring? It was gorgeous on Friday here in Denver, but it snowed ferociously yesterday. Luckily, it didn’t stick, but still! Well, at least I got all my insurance shenanigans squared away this past week. I’m trying to get a posting buffer together as I’ll be traveling to Louisiana this week for a family thing. Well, at least flying will afford me plenty of reading time…

I adore the belated Patrick Nagel. Artist Craig Drake has picked up the torch with his Nagelesque pop culture pieces, which are awesome. I need all of these for the Floating Domicile.

Her Madgesty went to a Purim costume party as Daenaerys Targaryen.

Chris Lough at Tor.com breaks down what Guardians of the Galaxy and Avengers: Age of Ultron have in store for us by closely reading the evidence with the comics in mind.

A new day, a new trailer for Maleficent, where we learn that Maleficent was previously a magnificent harpy-esque fairy who protected the forest before Aurora’s dad got greedy, attacked said forest, and stole her wings. No wonder she went and learned how to turn into a dragon! I do like the idea that Maleficent and Aurora become friends of a sort without Aurora realizing who exactly she is; I assume Maleficent can’t be in the same situation, if her larger plan is revenge against the King.

For April Fool’s, Drew Carey (The Price is Right) and Craig Ferguson (The Late Late Show with Craig Ferguson) are switching shows for the day! That’ll be adorable and I am not tearing up because I love comedian friendships at all.

Sofia Coppola will be helmsing Universal’s live-action take on The Little Mermaid.

Animator Chang Dai has made a short Doctor Who piece featuring Doctors One to Eleven. It’s supercute—look at Two! LOOK AT HIM!—and a little bittersweet at the end. Adorable.

The Incredibles is getting a sequel. I’m neutral tending towards unenthused; Pixar better have a marvelous story that needs to be told, or this is going to feel a little weird, like we’ve finally accepted that they are a fallible, mortal studio.

It’s official: Star Wars VII starts filming in May and will be set thirty years after Return of the Jedi.

This is how to make a cookie shot glass at home. Instructables user karinsurance is still looking into a glaze to keep the milk actually in, but still: a cookie glass.

The first trailer for The Giver is… underwhelming. Obviously, film and prose are totally different mediums, but I would have thought that they’d go black and white for the first portion. As this precludes color as Jonas’ first step into all of his senses, I assume something else will be used. Sound, perhaps?

I am not a traveling woman. I’ve said it before and I’ll say it again: I am not leaving New York after I get there unless that entire city is aflame. But for those who want to travel on a budget, tumblr user travelpaintrepeat has a guide to traveling around the world on the cheap.

Are Mike and the bots returning to television on April 1st? There was, briefly, a listing for something being riffed on National Geographic, featuring the men of Rifftrax, but it’s been taken down. I’ll guess we’ll see sometime this coming week if it’s true or not.

Shoes of Prey is a website where you can design your own shoes. Comics Alliance’s Betty Felon has designed several inspired by superheroes, which are gorgeous. I mean, look at these Wonder Woman oxfords. They are flawless.

The good news: there’s going to be a Jem and the Holograms movie! The bad news: it’s an update that is not set in the eighties featuring Ke$ha as Pizzazz. Creator Christie Marx is also not involved. …pass.

So Pacific Rim has been making mad international money, which means that Pacific Rim 2 might still be in the cards. (It’s the one where Newt will be utilized by the aliens that sent the kaiju for nefarious purposes. They will be defeated with love and diversity.)

Justin Simien’s Dear White People has been picked up for distribution by Lionsgate and Roadside Attractions! Oh, man, I can’t wait to see this.

One of my dear friends from college popularized the spoon theory among our group of friends, but I didn’t realize that it came from Christine Miserandino at But You Don’t Look Sick.

Comics writer Jim Shooter has made the treatment for Dazzler: The Movie, which never got made, available for public consumption (along with the story of why it was never produced). Its first line: “Cher, as the Witch Queen.” Basically, Dazzler and the Avengers get transported to the future, where Dazzler is mistaken for the prophesied Sun Queen to end the eternal war between Cher the Witch Queen and Donna Summer the Queen of Fire. Why is this not a thing?

At Pacific Standard, Christina Moon gives us the history of fast fashion, starting with South Korea’s industrialization in the sixties and seventies.

Genevieve Valentine outlines why Boyle on Brooklyn Nine Nine is a troubling and problematic character.