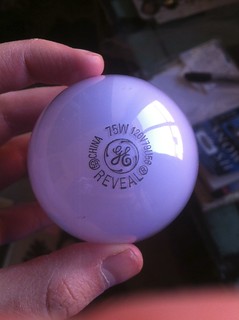 Yep, that’s the most exciting photo I took all week, because putting a light bulb in your bag to make sure you get the right one at the store is not a good idea. In my defense, I’ve decided to try and do one of those a few seconds a day videos for this year, so I’ve been focusing more on filming than on photographs. I’m off to an Oscar party tomorrow, because I have a Sunday off for the first time in forever, and I will be spending today sleeping and reading. LUXURY!

Superman reminds us that America is a melting pot.

It’s Oscar weekend! One of my favorite Oscar memories—and perhaps the reason that I am so fascinated with the Oscars—is The Return of the King’s clean sweep in 2004, which legitimized sf film in a really big way. Vanity Fair has an oral history of the film’s Oscar campaign. TheOneRing.Net has also posted their collection of “For Your Consideration” ads for the film, if you’d like visual aids.

Earlier this week, the Academy of Motion Picture Arts and Sciences presented a concert featuring the work nominated for Best Song and Best Score. It wasn’t televised, but they’re hoping to do so in coming years. This would be great, because I think the Best Score nominees often get the shaft during the presentation, just because it’s so hard to select just a piece.

The Nebula Award nominations are out! Pacific Rim is nominated for the Ray Bradbury Award for Outstanding Dramatic Presentation, which I dearly hope it wins, and The Coldest Girl in Coldtown is nominated for Andre Norton Award for Young Adult Science Fiction and Fantasy. The Mary Sue has links to any excerpts or pieces available online for free.

This is a photo shoot featuring a dachshund named Chewbecca and a little boy dressed as Han Solo. That’s all you really need to know.

Sarah Rees Brennan talks about her young involvement in fandom and her current career as a writer, and how she’s treated because she went public with her fic once upon a time:

This why asking me if my books are based on other books or TV shows is a sensitive subject: because a metric ton of people have assumed they are and spoken of my books as lesser because of it.

I didn’t write any of my books based on Supernatural, or Harry Potter, or Teen Wolf, or Sailor Moon, or Highlander, or Avatar the Last Airbender or whatever. I don’t think it would be a big deal if I had—though I didn’t. I DO think it’s a big deal that people assume and assert that I definitely did, and say that I suck because of that assumption.

I don’t want teenage girls writing fanfiction now to feel that they’re doing something inherently terrible, which must be hidden if they ever want to be real writers. I don’t want the writers of the future to get it in the neck like I do.

We have got to stop treating women like garbage (especially when we are women).

We have got to stop treating women’s hobbies like garbage (especially when they are our hobbies).

The Book Smugglers have revealed the contributors and cover for the 2013 edition of Speculative Fiction. Included are friends of the blog Ana and Renay, as well as the always amazing Gavia Baker-Whitelaw and Foz Meadows.

Doctor Who will be adding the character of Danny Pink, a teacher and co-worker of Clara Oswald, the current companion, to the next series. I like where this is going, but Moffat… Lord, I don’t even have the energy after Sherlock. Here’s hoping it goes well.

At Buzzfeed, Rachel Sanders revisits her childhood obsession with Japanese role-playing games. This hit home for me because, when I was a preteen, I identified myself primarily as a gamer. As someone who finds repetition intensely comforting, turn-based strategy was the ultimate in self-soothing. But those gaming binges—like those three days in high school when I played The Legend of Zelda: Twilight Princess all the way through—seem very much the purview of a child with immense free time. Obviously, as Kotaku’s Jason Schreier says, there’s certainly a way to incorporate it into an adult life featuring a full-time job, relationships, and other hobbies. But Sanders touches on a lot of the aspects of gaming that are lost to me now on a personal level.

Fabled science fiction magazine Starlog’s entire run is available for free over at the Internet Archive. I might not binge on gaming anymore, but archive panic is exactly my speed.

HAIM tackles Sheryl Crow’s “Strong Enough,” that most nineties of melancholy ballads, through a strainer made out of Toto’s “Africa.” This makes it the perfect song for my life at all times. (Also: between Este Haim and Kimberly Johnson, the drummer on Late Night with Seth Meyers, I think I can safely add “lady drummers” to my type list. Rock on, ladies!)