My Education by Susan Choi 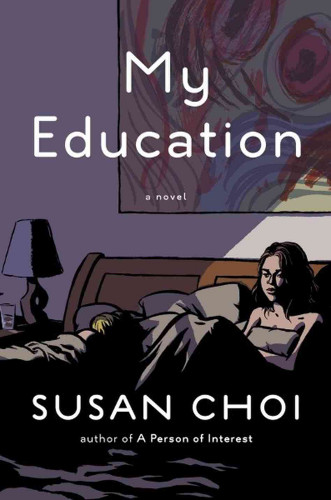 At the store, we have several displays recommending books—staff picks, publisher hot boxes, and a shelf featuring books recommended on NPR. (You wouldn’t believe how many people come into the store knowing only that a book they were interested in was featured on NPR recently. Thank goodness fandom has given me incredible Googling skills, which I have actually called “Internet detectivey” in front of customers in the past.) Susan Choi’s My Education loomed large on that display, but it didn’t seem like anything I’d be interested in—a female graduate student embarks an affair with her male professor. Yawn.

But Ana’s brief review of the novel last November (timeliness is not my strong suit) proved me wrong—it’s about a female graduate student embarking on an affair with her professor’s wife, a professor in her own right. On the one hand, I’m very happy that a novel about a queer affair is getting so much mainstream exposure; on the other hand, this implies that Viking felt like it needed to trick mainstream audiences into reading about a queer affair. I find the practice of stepping lightly around such context in summaries and blurbs frustrating, because the stepping is often so light that it keeps queer kids (like yours truly) from accessing queer stories. I mean, I used to use websites designed for parents to gauge the content of films to see whether or not a film would follow through on any queer promises made in its trailer. (Or implications. Or two dudes standing next to each other. I was twelve.)

And, on top of that, neither Regina (our protagonist) or Martha (the professor) particularly identify as queer and end the novel in relationships with men. As I was saying to my roommate last night, when it comes to representation, it’s not the individual example, but the pattern of examples. To the novel’s credit, Regina and Martha’s romance is one of the most important things that’s ever happened to them: for Regina, it’s literally her education, as she drops out of graduate school towards the end of the affair. And there is a side character in the 2007 portion that ends happily in love with another woman. But in the larger pattern of poor bisexual representation, it doesn’t sit completely right with me.

Which is not to say that it’s not a beautifully written novel about love and the painful experience of loving someone so much who cannot love you back the same way. Regina may be blindsided by her attraction to Martha, but it only makes her more eager to consummate it. They first kiss at a hideous dinner party Martha is throwing mainly to make people leave her house. Immediately discovered, the illicit nature—that of the affair, not of the fact that they’re both women—only spurs Regina on, and she’s soon clutching the phone to her ears in out of the way closets (it’s 1992) and making ill-conceived journeys to Martha’s home in the middle of the night.

But the honeymoon period—is there really a honeymoon period for an affair?—soon ends, leaving Regina to her education in love, an education that takes fifteen years to complete. In all the naivety of youth, she believes that there’s only one way to love someone, with every ounce of passion you possess and sacrificing all you have towards it. The fact that Martha doesn’t reciprocate this completely reflects both Martha’s aloof personality and their not insignificant age difference. Is Martha cowardly for not owning up to her relationship to Regina? Yes. But Regina’s desperate need to be validated by everyone they meet is its own kind of cowardice. In 1992, Regina chalks this up to Martha’s cruelty; in 2007, she realizes that she was asking Martha to abandon all the other kinds of love in her life for her, the kinds that she now has and realizes the value of, even as she reunites with Regina briefly.

All of this is expressed in Choi’s emotionally lush but still oddly distant writing style. Regina, it’s implied, is writing from a point beyond 2007, which would explain the distance. Moments flare into immediacy here and there with gorgeous, spare prose. The sexually sated Regina compares herself to a dissembled doll and a taxidermied animal stuffed with narcotics, to note two particularly vivid examples, but I was especially taken with the moment Regina kisses Martha for the first time, which takes place in a cool room after the heated frenzy of the worst dinner party I’ve ever encountered in fiction. But the distant writing kept me from fully engaging, even with these brief moments.

Bottom line: Ignore the summaries and blurbs that neglect to mention the queer affair at the heart of this novel. Susan Choi relates a life-changing love affair in emotionally lush but oddly distant and spare prose, which kept me from connecting. If you’d like.

7 thoughts on “Review: My Education”