A History of Food in 100 Recipes by William Sitwell 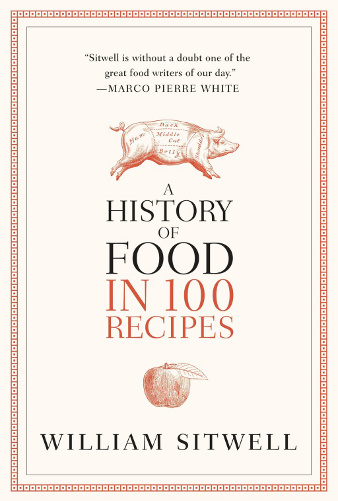 The other day, I made my first omelette.

It was dead simple—a little salt, a little butter, and a few goat cheese crumbles. More importantly, it was drawn from Xavier Marcel Boulestin, the first television chef in the late thirties, as collected in A History of Food in 100 Recipes. I’ve been hesitant about looking to the twentieth century in my experiments with historical cooking, which is very silly of me. Approximating historical meals is how I viscerally connect with the past; every moment in history is of some value. That omelette took me to the dawn of food on television, when simplicity was, yet again, in style. Delicious.

Such is the connection with food that made me pick up A History of Food in 100 Recipes. At the store, it looked, in my brief while shelving, like a more historical work. I keep telling customers that I’m blown away by the beauty of cookbooks, and this is no exception. When the Floating Domicile gets a kitchen of its own, there will be a cookbook display. The cover of A History of Food in 100 Recipes would look perfect in said display in the fall—it’s beautifully white, with a rough, rustic texture.

But this isn’t because the text has the air of an English professor settling down to a Christmas meal and expounding on the history of each dish. Rather, this is because it’s a gift book, through and through. I’m getting more and more acquainted with this peculiar “genre” (I see it as more of a market, like young adult fiction) while working at the store. They’re light. They’re cute. They’re the sort of thing you get someone you don’t know well enough to buy A Secret History. They’re supposed to be inoffensive, but often end up revealing a lot of the unquestioned prejudices of your society, since “everybody” is supposed to like them. This is why I ended up being horrified by A Curious Invitation—how on earth do you digress so far from writing about fictional parties that you end up making fun of people who suffer from depression?

And, alas, A History of Food in 100 Recipes falls into the same trap. At first, I thought William Sitwell might do better in this regard. As he discusses a Viking recipe for dried fish, he points out that they might seem “stupid” by our standards for not relying on a written language, but they definitely did well for themselves, so who are we to talk? But this doesn’t continue. Sitwell finds Aztec a hilariously complex language. Eliza Leslie, the nineteenth century cookbook author who popularized the cupcake in America, is mocked for gaining weight to the point of a medical problem as an older woman. Julia Child is mocked for looking mannish. Feminists in the nineties who objected to The Domestic Goddess were only mad because Nigella Lawson is conventionally attractive. Slow Movement people use such big words; how can they expect anyone to take them seriously? And so on.

I point this out because it shows how easy it is to exclude; to punch down instead of punching up. And the worst part is that it’s equally easy not to exclude—none of these examples are integral parts of their chapters, but off-hand comments made by Sitwell. Because this sort of carelessness lurks in fluffy, light books, it’s easy to dismiss. But I, for one, would rather not get triple-slapped for being a wordy feminist with big hands when I’m trying to read new literature about food history.

But there is plenty to learn here, even though Sitwell starts focusing on Europe and America from about 1500 on without mentioning that narrow focus in his introduction. To give you my usual highlights reel—if you roast a light bird on a hazelwood rod, it rotates itself. (Due to the sap in the hazelwood heating up, but still: spooky!) Turkeys are called turkeys because Europeans thought they came from Turkey. The introduction of the hair sieve, which could be used to sift finer flour, around the time of the Battle of Hastings made bread a class signifier in medieval England. Sitwell delights in pointing out the cyclical popularity of simple food, with rich fare and technological wonders being the other side of the wheel. (His hatred of the microwave borders on the superstitious.)

The chapter on congee is easily my favorite chapter, though, and not just because I now have a soup-like recipe I can make without broth. (Bite me, grocery store!) Rather, it looks at the centrality of a certain crop to a nation’s survival and how that affects its culture. That’s exactly the sort of thing I wanted when I picked this up, but it’s in short supply here. I recommend checking elsewhere for your food history.