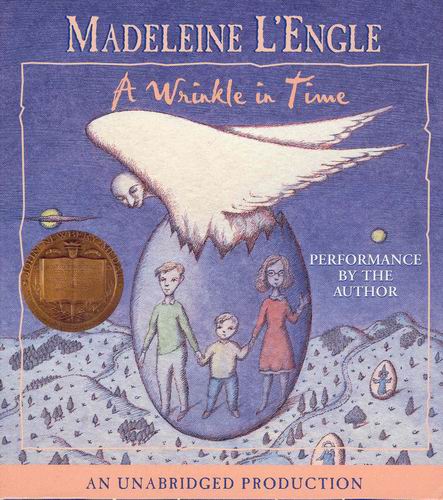 Readers, I’ve messed up. As I stated in the first installment of this feature, I only listen to audiobooks of books that I’ve read before. After shelving the umpteenth copy of the very lovely new editions of Madeleine L’Engle’s Time Quintet, I decided it was time to return to A Wrinkle in Time. I patiently waited for it to come in at the library. When I started listening, the familiar opening scene sprawled out before me…

And then I realized that I had never actually finished the novel, although I distinctly remember owning the novel as a child. Specifically, I owned an edition with this cover, which fit right in with the aesthetics of the animated shows on Nickelodeon I would catch off and on as a kid. Of course, growing up amid the sprawling sea that was (and is) my parents’ library, owning a book didn’t necessarily mean that you were going to read it, but A Wrinkle in Time made a bit more of an impression than the rest of the flotsam. Somehow, a copy of L’Engle’s Meet the Austins fell into my hands, and I was baffled that it contained no speculative fiction elements, like A Wrinkle in Time.

So I can only conclude that I started and stopped the novel several times—enough for the first scene to be burned into my memory and trick me into thinking I completed it a decade on. And that creates a problem. This is my reread feature because I’m a visual learner, not an aural learner. (Nothing quite puts that into perspective like transcribing phone numbers for customer orders at the store.) Having the general shape of things somewhere in my mind lets me enjoy an audiobook without fretting that I’m missing something, although it’s obviously not the same as reading a book for me. Every review in this feature is much more about me revisiting a text instead of consuming it in my usual bone-gnawing fashion.

All of this is to say that, not having actually read the novel before consuming in a form I can’t absorb everything from, I can only really offer impressions of A Wrinkle in Time. The material I actually had encountered before was easy to sink into—L’Engle had a gift for timeless slice of life, although there’s plenty to be gained by being aware of the historical context of the novels. She reads a bit like a slightly more modern and much less judgmental C.S. Lewis at points, with her light, engaged tone, frank dealings with Christianity, and grasp of kids. Meg is a surly revelation, a math whiz suffering in school because of her learning style and the family scandal of her vanished father. Some of the best moments in the beginning come from Meg and her mother simply talking about what Meg wants out of life and how she’s managing at the moment.

Cozy is quite a good word for A Wrinkle in Time, indicating both the domestic element that’s so important (ultimately, Meg is trying to put her family back together, without realizing that her family will never be back together the way they once were) and its simplicity. Its scope is vast and the story sets up an epic battle of good (as represented by intellectually curious misfits) and evil (the unrelenting forces of conformity) but Meg earns a happy ending by rescuing her beloved and uncanny little brother, Charles Wallace. Even the planets Meg, Charles Wallace, and designated love interest Calvin O’Keefe visit feel more allegorical than anything else; their last stop reminds me of nothing so much as the mulefa from The Amber Spyglass. Science fantasy is a hard subgenre to define, but The Time Quintet definitely falls under that umbrella.

As for the audiobook presentation itself, I was initially delighted that Madeline L’Engle narrated it. (A newer version narrated by Hope Davis is also available.) But the charm of her brief introduction wore off once I realized that her strident tones would never soften. It makes for a bit of an exhausting listen, to be honest, even for such a short novel. But, mercifully, there are absolutely no musical interludes or even discreet comments about when it’s time to switch the cassettes. Mrs. Who’s voice is modulated, just as it is in the novel proper, but that’s the only gimmick the audiobook springs for.

Bottom line: I was so sure that I’d read this before, but I hadn’t, so this was a bit of a hazy read for me. (I’m a visual learner, not an aural learner.) But Meg remains a surly relevation in this cozy novel about good, evil, and conformity. If you’re interested.

2 thoughts on “Reading by Ear: A Wrinkle in Time”