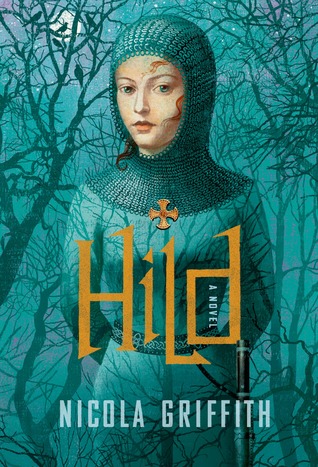 While Nicola Griffith’s bibliography includes award-winning speculative fiction, it’s not a particular stretch to find her writing historical fiction. Historical fiction and speculative fiction—especially fantasy—often walk hand in hand. They share similar challenges, not the least of which is how to bring the world of the story to life. The only difference is how close you have to stick to your research: the speculative fiction author can follow or wander away from their research at a whim; the historical author’s goal is to stick to the historical script. This, of course, means that both genres are equally susceptible to Worldbuilder’s Disease. After all, you did do all that research… you wouldn’t want it to go to waste, right?

This, paradoxically, is both Hild’s greatest strength and its weakness. Reading it reminded me of nothing so much as slipping into a very warm bath. In following the early life of St. Hilda, Griffith evokes the Middle Ages like you wouldn’t believe. Its atmosphere has tangible weight, backed up by thousands of small details that drive home how similar and how different the people of seventh century Britain were. Given St. Hilda’s scant biography, Griffith takes the opportunity to flesh her life out with seemingly every contemporary political struggle she would realistically have access to. It’s the kind of novel you can live in for days, and there’s something comforting and exhilarating about that.

But it also means that it’s not a terribly gripping read. Hild moves at a glacial and stately pace, in an attempt to reflect the rhythms of life in the Middle Ages. The focus on politics is hindered by the fact that the politics gradually become more and more byzantine. I always do my best to try and keep up with a read in good faith, but I simply gave up at some point during Hild so I could finish the darn thing. Griffith’s devotion to maintaining a historically accurate tone means that information is often assumed or doled out as a given. While the novel does include supplemental material, I read an advance copy from NetGalley that lacked such necessary materials. I’m sure it would have improved things—somewhat. But everything seems soaked in a general lethargy, save for one or two sex scenes and battle scenes.

On top of that, Hild is willfully and purposefully interior. Griffith’s Hild is a reflective and strapping young woman, handy with an axe but handiest with saying just the right thing to influence her uncle, the king. She grows up on the edge of things, forever the observer. With her equally manipulative mother proclaiming her the light of the world and a true seer, Hild translates her keen eye into prophecies and omens to bend the king’s ear. Of course, as Hild grows up strong and tall, rumors and superstitions begin to circulate around her. They only worsen when Christianity begins to take hold of her uncle’s court and she must take the political maneuvers of Paulinius into account.

Hild herself is not particularly religious. Above all else, she is devoted to the pattern that she sees in all things, the pattern that allows her to construct plausible prophecies and omens to logic her way towards the truth. Christianity is useful to her, but holds no particular interest for her. And it’s this, oddly enough, that I feel disappointed by. It’s for personal reasons. As what can only be described as post-Catholic without a lick of religious training, I quite like the concept of saints, but I don’t know terribly much about them. I picked up Hild expecting a novel about one woman’s journey towards sainthood, regardless of how Griffith interpreted how devoted she was to Christianity. But St. Hilda’s path towards sainthood began in her late thirties; the novel ends with an incestuous marriage long before that. (It’s consensual, at the least.)

Griffith seems much more interested in Hild’s world than Hild’s faith, which is fair. As a reader, I can’t punish an author for producing a book that wasn’t exactly what I expected. Otherwise, I’d never have the joy of being surprised or having my expectations exceeded. But given that Griffith has to invent a great deal of Hild’s life, I’m left wondering if Griffith shouldn’t have tackled another historical woman or even invented her own. True, the circumstances of Hild’s life are quite ripe, but the weight of her unaddressed future is almost too heavy for the novel to bear.

It would be remiss of me not to mention that Hild is a rare example of historical fiction featuring a queer protagonist where their sexuality is both not the focus and not ignored. Homosexuality is treated as something utterly mundane. Obviously, the clergy frown on it, but that distaste seems lumped into “anything remotely sexual” instead of specifically focused. Hild’s tempestuous relationship with her bodywoman, Gwladus, is one of the novel’s shining threads. It’s weighted with ethical and moral questions, given the power imbalance inherent between the king’s seer and her slave. Can you have consensual sex with your slave? I kept hoping for it to become something more, and then it took a right turn on me. Alas! But ’tis better to ship and be wrong than to never ship at all…

Bottom line: Hild’s worldbuilding is both its strength and its weakness—you could live in this novel for days, but you’re going to be moving at glacial speeds. While I like Griffith’s Hild, I wonder why she chose this historical figure if she wasn’t going to address her religious life later in life. Still, solid historical fiction with queer leads is rare, so it’s worth investigating if it sounds interesting to you.

I read this book on NetGalley.