The Handmaid’s Tale by Margaret Atwood
read by Betty Harris 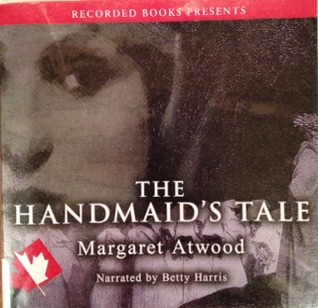 During the mid-aughts, my family spent two weeks in Seattle visiting my brother. (I’m not the first McBride who has gone west before returning east in glory. I am not even the second.) A little ways into the trip, my parents asked me if there was anything I wanted to do while we were there. Stunned by this rare opportunity to steer our course, I nevertheless had a ready answer: the Science Fiction Museum and Hall of Fame.

Seattle’s Science Fiction Museum was only open for seven years, from 2004 to 2011. What’s left of the museum is now the Icons of Science Fiction exhibit at the EMP Museum. But when I went, it was a proper museum, with darkened, themed rooms and enough important sf artifacts to make your head spin, complete with a Terminator robot that still gives me nightmares. (Although I had a nightmare about incorrectly parking my car the other night, so it’s not like that’s hard.) While I inspected each case thoroughly, dizzy from the legitimacy a real museum gave my interests, my father examined the Blade Runner material and fell in love with near-future sci-fi. And, at some point, my brother bought a copy of The Handmaid’s Tale. The fact that he owns this has always heartened me.

Naturally, I immediately borrowed it and devoured it. As sheltered from pop culture as I was, I’d never absorbed the (utterly wrong) message that speculative fiction wasn’t for girls, but I’d also never been faced with sf so specifically concerned with and focused on women. It wasn’t my feminist sf awakening—that would be The Mists of Avalon—but it was one of the first steps. I’d simply never thought about explicitly using sf to explore feminist themes before. Reading it as a teenager brimming with a raw and unshaped kind of feminism, under the sway of Atwood’s thoughtful, melancholy prose as I curled up in a ball in my brother’s basement apartment, it all made sense. This was a possibility. This was a warning.

And it still does, years after my first reading and twenty-eight years after its publication. In fact, as I was listening to this audiobook, my government shut down because one party wanted to block the Affordable Health Care Act, which was partially motivated by that act’s provision about birth control. The best speculative fiction uses its vast potential to explore humanity and society, and The Handmaid’s Tale will always resonate in a culture where the female body—where my body—is a battleground. By taking exactly that sort of anti-woman thinking to an extreme, Atwood lays bare the distrust, hatred, misogyny, and even misandry (“Men are animals who can’t help themselves!” the indoctrinating Aunts crow, justifying the obscuring clothing of the Handmaids and the segregation of the genders) of it all.

But The Handmaid’s Tale is not all politics. Well, it is, as the personal is political and the political personal, but Offred (whose name I pronounced as “Offred” for some reason as a kid) doesn’t spend the entire novel railing against the system. Rather, it’s a portrait of a life reduced to almost the barest scraps—almost, because a few scraps of power are powerful motivators for the oppressed women of Gilead to turn on one another. With a life so constricted, Offred contemplates every angle of her new life and, most heartbreakingly, remembers her life before, as well as the events leading up to her current state. Sometimes, she says, she wakes up, thinking she’s back with her husband and her child, before she remembers where she is. And Offred is, in a sense, one of the lucky ones, although she’s not safe from being deemed an “unwoman” and sent off to be worked to death cleaning up toxic pollutants.

This can make it seem quiet, but actions sound louder in such a small life—the transgressive behavior of Offred’s “master,” the unnamed Commander, Offred hoarding a match as a possible means of suicide, and how important a sliver of agency can be, no matter how circumscribed. I’ve never seen Atwood so lush before; Offred’s internal monologue (whose external qualities become apparent at the end of the novel) is full of the things that she is forbidden. I was particularly touched by Offred’s yearnings to build real, human connections with the domestic Marthas who work in the Commander’s house.

I’m not so sure how I feel about the epilogue. In the intervening years, I’d totally forgotten about it. While I appreciate putting Offred in context and making it clear that Gilead’s efforts to erase the identities of women succeeded, Offred’s narrative has such a perfectly ambiguous ending that it’s a little jarring to continue reading. It also sounds jarring in the audiobook, going from the low, lyrical tones of Betty Harris to the tones of another reader. (Charmingly, this audiobook isn’t entirely clean; you can sometimes hear vague background noise, which, unintentionally, make the monologue feel more real.) But it still all fits.

Bottom line: The Handmaid’s Tale remains as resonant as ever, as a portrait of a very circumscribed life lays bare the extremes of anti-feminist and anti-woman forces. Highly recommended.

8 thoughts on “Reading by Ear: The Handmaid’s Tale”