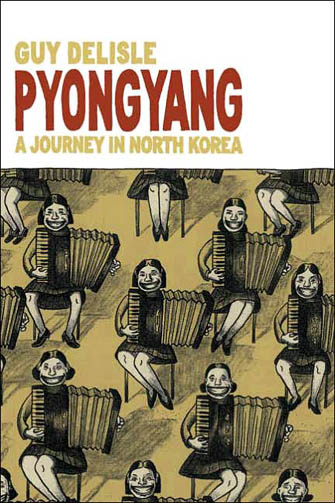 I feel like Pyongyang was floating around the book blogger community about a year ago, although it earned much of its acclaim upon its English release in 2006. (It was first released in French in 2003.) I was so sure when I sat down to write this post that Ana had reviewed it, but it turns out I totally hallucinated that. This leaves me with nothing but my tremulous fascination with North Korea as motivation, which is forever tinged by its birth upon reading World War Z. The ideas of a totally (or near totally) isolated country and such strict control over the media are almost concepts that I just can’t wrap my head around. So I picked up Guy Delisle’s travelogue to get a better handle on it.

Pyongyang is Delisle’s account of his 2001 trip to North Korea, where the cartoonist spent two months working as the liasion between a French animation company and a North Korean one. Armed with a contraband FM radio and a copy of George Orwell’s 1984, Delisle searches for the cracks in North Korea’s veneer, capturing them in his calm, sardonic voice. Accompanied by a translator and a guide at all times, he struggles to reconcile the reality of North Korea that he sees around him with the (declared) ideology of the North Korean people.

Guy Delisle is known for his other travelogues; they include Shenzhen, Burma Chronicles, and Jerusalem. Pyongyang is the second of his travelogues, although it was the first of his works published in English by Drawn and Quarterly. While I haven’t read his other works, I know that the visits upon which they’re based are a little broader and the latter two include the company of his wife, whose work provided them with the travel opportunity. But Pyongyang must surely be the most limited of his works in terms of geography. Delisle’s movements are controlled by his interpreter and his guide, allowing him only access to Pyongyang and a few other sites, such as the International Friendship Exhibition located outside of the city. He can only see average North Koreans from a distance; up close, he’s limited to his interpreter, his guide, and the animators he must interact with, all primed to deal with a Western capitalist.

Thus, Pyongyang must turn inward—not so much into Delisle, but into the minds of these loyal revolutionaries. As Delisle uncomfortably walks past half-decayed hotels, monuments to the Kim family, and “volunteers”, he can only wonder if they truly believe what the regime is selling. Do they truly enjoy their musical propaganda? Do they honestly believe that Koreans are such a superior race that they don’t produce any disabled people? How can the select few that travel outside of North Korea reconcile what they’ve seen with how they live?

While Delisle can visually show us North Korea in a way that photography can’t (a friend contributes two pages about having his photographs censored for garbage—which he didn’t take pictures of), he can’t crack the veneer of the people he meets. The worst thing he hears anyone say is that they don’t care for a particular propaganda film. This doesn’t, however, preclude more human moments, such as Delisle, his interpreter, and his guide having a picnic and a rare moment of rest, or Delisle’s small defiances petering out (like buying a can of Coke, even though he hates the stuff, or discovering that his contraband radio just picks up the government-controlled station).

Instead, Delisle depicts the horrors of the regime in contrasts. Watching the hotel stock up on rice to pay their employees, he mentions North Korea’s national public distribution system, where food is distributed based on one’s loyalty and usefulness to the regime. Given the narrow view that North Korea wants to give its visitors, it’s these little dollops of information, gleaned from later research or conversations with non-North Koreans who have lived in Pyongyang for some time, that give you the bigger picture.

But Pyongyang isn’t all dour facts and dark, soul-crushing walks. Delisle finds humor in his unique situation, be it singing the Captain Planet theme song at his guide, Captain Sin, or just finding the idea of having fun with his dour interpreter and guide hilariously ironic. It’s hardly a laugh a minute, but it does feel like hanging out in Delisle’s brain for a little bit, looking at the world quietly and humanly in an inhuman place. He did take a huge tumble in my estimation when, while touring a museum about wartime atrocities, he gets distracted by the beautiful guide (fair enough) and narrates that “I can think up a few tortures of my own that I wouldn’t mind inflicting on her”. What an extraordinarily poor choice of words, especially in this context. My only other comment on that panel is just me going BLURGH.

Interestingly, a fan of Delisle’s visited North Korea and decided to recreate some of his panels with actual photographs as much as they could. They then had it bound and gave a copy to Delisle. It’s called Pyongyang Too and you can check it out on Delisle’s website.

Bottom line: Pyongyang is a quiet and human look at life in an inhuman place. If you’re interested.