The People of Paper by Salvador Plascencia 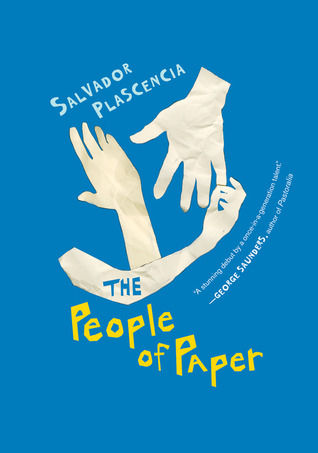 After his wife leaves him, Federico de la Fe and his daughter Little Merced depart the town of Las Tortugas, Mexico, and head for Los Angeles. There, with the aid of a local street gang and the prophetic powers of a baby Nostradamus, they engage in an epic battle to find a cure for sadness. Mechanical tortoises, disillusioned saints hiding in wrestling rings, a woman made of paper, and Rita Hayworth are a few of the players whose destinies intertwine in this story of war and lost love. The People of Paper is simultaneously a father-daughter immigration story, a wildly inventive reimagining of Southern California mythology, and an exploration of the limits of fiction. Part memoir, part lies, this is a book about the wounds inflicted by first love and sharp objects.

Books about books can cause major damage to your reading list—Jen Adams’ The Books They Gave Me was no exception. The People of Paper intrigued me almost solely by its title, really. I can’t even remember what the contributor said about this book, beyond the fact that they loved it. While I usually don’t go for very experimental, post-modern fiction, a good title is as good as a reason as any to go exploring.

Liviana at In Bed With Books points out that The People of Paper probably shouldn’t work (there’s a binary chapter, for Pete’s sake), but wonderfully does. Greg Fragopoulos, writing for The Quarterly Conversation, found it very affecting. However, Steven Poole at The Guardian disagrees, finding its ambitious structure too all over the place to have an impact. Nathaniel Rich, writing for The New York Times, also finds the novel too ambitious, letting typographic experiments take the place of character.