Cinnamon and Gunpowder by Eli Brown 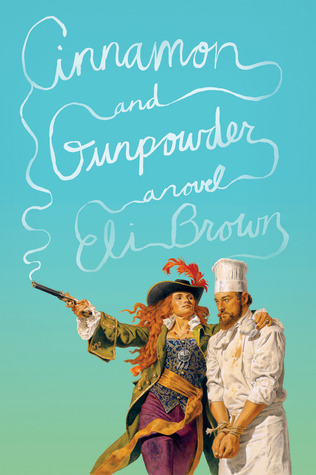 I know, I know; there’s a reason “you should never judge a book by its cover” is one of the cliches. But I can’t help it! I’m a visual person, and when you’re galloping through NetGalley in a soon-to-be postgraduate panic, you only really stop to look at the shiny things. And so Cinnamon and Gunpowder caught my eye look before my brain registered the title or plot. It told me everything I needed to know to want to pick it up: it involved a lady pirate with clearly mad swagger and her chef captive. I haven’t seen Cutthroat Island, but the same part of my brain that demands I see it before I die was the same part that yelled at me to request it now. More often than not, this kind of poor impulse control doesn’t work out well for me. But sometimes, it does.

Cinnamon and Gunpowder opens in 1819. Famous chef Owen Wedgewood has been captured by the infamous pirate Mad Hannah Mabbot, after she brutally murders his previous employer. The only reason he hasn’t been killed alongside his employer is because Mabbot has decided that she wants to experience haute cuisine. As long as Wedgewood manages to put together a feast worthy of an empress in front of her every Sunday, he will be spared. How she expects him to do that in a tiny ship’s kitchen with laughable ingredients, Wedgewood has no idea, but presumably Mabbot has bigger fish to fry: like seeking the notorious and mysterious pirate known as The Brass Fox.

Did I say “lady pirate with clearly mad swagger”? I meant to say “the best lady pirate with clearly mad swagger”. She tells the first man she kills in the novel to tell the Devil she’s going to be late for tea. That’s awesome. But crowd-pleasingly badassery aside, Mad Hannah Mabbot is also the kind of well-rounded character that the term “strong female character” should actually denote (not the shorthand it’s turned into). She’s clever, witty, fickle, practical, and human. What Wedgewood initially takes as a mission of greedy bloodlust is actually a mission to atone for the sins of her past and champion the oppressed and exploited—the ranks she only escaped by luck and pluck. But even that’s not altruistic, as another character points out to her late in the novel—at worst, it can also be a way for her to justify her violence. This examination of responses to injustice extends to the whole novel; it’s such a relief to finally find a swashbuckling text that doesn’t shy away from the realities of its time period.

Mabbot’s three dimensions are thrown into sharper relief when viewed through Wedgewood’s eyes. The entire novel is told through Wedgewood’s journal, so everything is in his voice: articulate, prim, and reflective. Part of the fun of the novel is watching Mabbot wind Wedgewood up and him, even though he knows that’s what happening, being utterly unable to not react. But he, like Mabbot, is also well-sketched. Brown gives him a world and a history that he longs for while trapped on The Flying Rose, which softens the moments Wedgewood attempts escape, especially as he and the crew grow closer and closer towards the end of the novel.

The plotting of Cinnamon and Gunpowder is deceptively simple. At its simplest, it’s a riff on Scheherazade and “Beauty and the Beast”, but at its most complex, its about justice, injustice, family, and accepting the world in all its weird glory. That’s Wedgewood’s character arc throughout the whole thing, even through the bittersweet epilogue. Events feel organic and Wedgewood’s voice is engaging enough that you just want to keep reading. I’m starting to fall out of love with reading things on my computer, so the fact that this kept me glued to Rory Eccleston is quite a feat.

And then, of course, there’s the food. I was expecting much more (something short of including recipes, which I, for some reason, find very cringe-worthy), but I enjoyed Wedgewood’s sensuous, philosophical take on food. Watching Wedgewood attempt to create food out of what he’s given is unexpectedly engaging: I began to find myself anxious to see what every new raid would bring in for the pantry, so that he might be able to create something wonderful for Mabbot. It’s quite poetical stuff, and I found myself touched at the end of the novel when Wedgewood discusses his new philosophy on eating meat. (I imagine my vegetarian readers might not.) Reading it made me hungry, and I think that’s the best compliment to give food writing of any kind.

Bottom line: Cinnamon and Gunpowder not only boasts an amazing female lead, but is also a sparkling example of a swashbuckling novel that doesn’t shy away from the political realities of its time. Well worth a read.

4 thoughts on “Review: Cinnamon and Gunpowder”