The Black Count by Tom Reiss 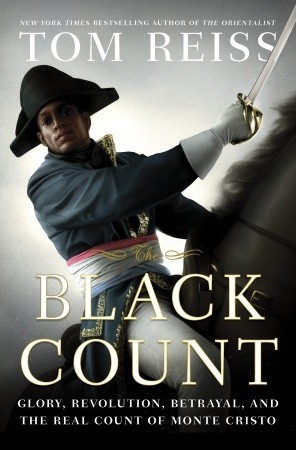 In the wake of 9/11, growing up French-American in Georgia gave me a particular appetite for the bloodier annals of French history. When “freedom fries” were a thing and there was always that one guy in my history class who could not get enough of mocking France’s supposed pacifism, I could always be counted on to rant incoherently about the Terrors and Napoleon. I’ve since evolved into a less spiteful and more articulate human being, but the appetite for the history of revolutionary France remains. Combined with my love for Alexandre Dumas, that means The Black Count may as well be written for me. Thanks for the recommendation, Cass!

The Black Count tells the incredible story of Alex Dumas, the father of the man who wrote The Three Musketeers and The Count of Monte Cristo—all influenced by his father’s life. Born the son of a ne’er-do-well French count and a Haitian slave in Saint-Dominigue in the dying days of the Ancien Régime, Dumas, after being pawned by his own father to finance their trip back to France, was schooled in the art of war like any aristocrat’s son. After he enlisted in the army (abandoning his father’s name in the process), Dumas rose from simple soldier to imposing general, representing revolutionary France impeccably—until he began to butt heads with another rising general, one Napoleon Bonaparte…

Reviewing my notes to write this post, I realized that The Black Count reminds me a bit of Kameron Hurley’s “‘We Have Always Fought’: Challenging the ‘Women, Cattle and Slaves’ Narrative” over at A Dribble of Ink. (If you haven’t read it, you should!) Much as Hurley’s article extols us to remember that women existing outside of the traditional property narrative have existed in human history, The Black Count reminds us that, in Western cultures, the narrative of white slaver and black slave is complicated by the presence of free blacks and people of mixed race. It’s a bit like the Doctor Who episode “The Shakespeare Code”, when Martha wonders if she’s going “to be carted off as a slave” when she goes into the past and the Doctor points out two free women of color going about their business in Elizabethan England. The ideals of the French Revolution provided a perfect opportunity for abolitionists and political activists of color to campaign for expanded rights and the abolition of slavery, and France became the first government in history to abolish slavery in 1794.

And it’s this rare window of opportunity—believe you me, it slams shut pretty fast when Napoleon rises to power—that gives Dumas all of the opportunities that let him become “the General” (as his father-in-law affectionately called him) that his son so adored. (Dumas died when Alexandre was four years old; Alexandre hero-worshipped his father all his life, perhaps because he never got to see his father as a whole human being capable of disappointing him.) And what a man he is. A few other reviews I’ve read comment on Reiss’ own hero-worship of Dumas, but come on—this is a man the Austrians start calling “the black Devil” because he successfully captures a supposedly impenetrable fortress. While Reiss oddly never mentions Porthos in connection with Dumas, it’s easy to see where his son got his appetite for men capable of almost super-human feats of strength: his father could knock dudes off horses with a single blow of his manly fist. On top of his derring-do, strength, and handsome looks, he’s also a man of honor, reigning his troops back in from the excesses of war.

While reading this, I kept thinking, Man, this would make a fantastic film. That’s less to Reiss’ credit as a writer and more to Dumas’ credit as an awesome human being uniquely positioned in history. (I mean, the Ancien Régime! The revolution! The love story between Dumas and his wife! Dumas’ time as a prisoner of war! The dawning of the Napoleonic Empire! Why is this not optioned? Do I have to write this screenplay? Because I am not qualified to do that, but I will if I have to.) Reiss begins personably enough, bringing his own research experiences into the narrative, but things can get a little off-track. I did appreciate his coverage of the French Revolution, but it occasionally felt like we were leaving Dumas behind. Reiss just can’t resist the temptation to include, in footnotes, some of the weirder anecdotes he’s discovered: some are welcome (such as the origin of the word buccaneer) and some seem superfluous. To be fair, this does make The Black Count an all-in-one—for those without any background in the historical context, it’s easy to follow along. But it also makes it a bit difficult to get through when you just want to hear about Dumas.

Ultimately, though, it’s well worth the read. In writing The Black Count, Reiss had access to previously lost primary sources, including Dumas’ own account of his imprisonment. Alexandre wrote about his father in his own memoirs, albeit through the lens of his own love and the perspectives of others, and there have been mentions here and there due to Dumas’ incredible military record. But those records reflect the racism of those who wrote them down; in the last few pages, Reiss details an account of Dumas that gets a lot of mileage out of the “born in bondage to uphold equality in the Revolution” narrative, which was later adapted into a different account that didn’t even mention his race. While his son has eclipsed him in the popular imagination, I hope re-examining Alexandre in the context of his position as a mixed-race writer sheds more light on the incredible story of his father.

Bottom line: While Reiss can get away from his subject at times in favor of shinier anecdotes, The Black Count remains the riveting story of Alex Dumas, born a slave in the Ancien Régime, who became a general to rival Napoleon himself. Oh, and he fathered and inspired Alexandre Dumas. If you’re interested (and if you’re not, who are you?), it’s well worth a read.

8 thoughts on “Review: The Black Count”