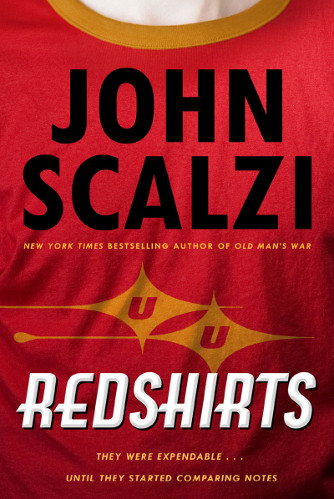 So Star Trek Into Darkness broke my heart and not in the fun way. (The fun way involves my usual Sunday night weepings, which I believe the rest of the world calls Once Upon a Time.) With my hold on Star Trek: The Motion Picture (yes, I know it’s painfully slow, but completionism compels me!) remaining in a, well, holding pattern, I knew I had to do something to drum up my waning enthusiasm for the franchise if Project “Watch All Of Star Trek” was ever going to get completed. Luckily, Redshirts was available right off the shelf at my local library when I finally stepped in.

Redshirts opens (after a prologue) with Ensign Andrew Dahl, formerly a seminary student on another planet, being assigned to the Universal Union Capital Ship Intrepid. Dahl is excited to work in the ship’s xenobiology laboratory and do some hands-on research in the form of away missions. But as he settles into the ship and his new group of friends, Dahl is disturbed to realize that the low-ranking officers on the Intrepid have a nasty habit of getting killed on said away missions… while its most senior officers walk away unscatched in the most impossible ways. While their superior officers prefer to avoid the subject, Dahl and his fellow ensigns determine to get to the bottom of this phenomenon—and solve it.

Opening up Redshirts, I was expecting what Dahl would uncover would be some big, dark corrupt plan by the Universal Union to preserve certain officers that required killing off officers considered expendable. (The novel’s tagline, “They were expendable… until they started comparing notes” has something to do with this.) Instead, Scalzi gives us something so postmodern it almost hurts. Other readers may expect a straight deconstruction—it’s certainly implied, by the inclusion of a blurb from Lev Grossman—but Redshirts gets much more meta than the ilk of The Magicians or Banewreaker. I’ve not read Scalzi before, so I don’t know how this fits into his bibliography, but the novel starts to buckle a bit when he adds yet another meta level to it in the last few pages of the novel proper. (Redshirts contains three codas written in the three perspectives.)

Getting meta in fiction can be quite difficult to do correctly—if your argument is that these characters are truly fictional, then it’s hard for a reader to sympathize and empathize with them as they would a truly three-dimensional character. The first four seasons of Community got away with this because, no matter how meta it got, it was clear that these characters, no matter how zany things got, were real human beings with real emotions at stake. Meta was often used as Abed’s way of dealing with the world around him, grounding the practice completely. (Your mileage may vary, of course.) Scalzi feints in this direction a lot for the novel proper, but prefers to center the narrative in a snarky, Buffy-esque tone. This makes for snappy reading—I whipped through this in a dazed evening—but the emotional connection isn’t all there.

In the novel proper, that is. The codas go into this further, looking into the lives of three minor characters from the narrative and exploring how they’re dealing with the main events. There’s one development, which deepens the prologue, that’s explored here, and they are stunning. They’re the reason I closed the book and hugged it to my chest, delighted I’d finally read a book this month that knocked the breath out of me. Scalzi can obviously write quiet, heartbreaking introspection as well as snappy, funny dialogue: I just wish the two fit more closely together in this text.

As with deconstructions, Scalzi’s narrative behooves him to hew the worldbuilding as close to Star Trek as possible, but that’s actually addressed in the novel, so. Still, I do appreciate his deftness with it: Dahl has a very interesting backstory that’s clearly and succinctly delivered in an organic way. Coming off of Dragonflight (oh, Dragonflight), this novel went down smoothly, and I very much appreciated it. Interestingly, Star Trek’s habit of having diverse background characters plays out wonderfully in prose: I really enjoyed reading a novel where, while the cast was undoubtedly diverse, their races and genders didn’t matter. Orientation is brought up briefly and, disappointingly, discarded, but, in the first few pages, it does have a fellow ensign try the tired “Maybe you just haven’t met the right one!” argument on someone who isn’t attracted to aliens.

This would be an interesting double feature (double media?) with Galaxy Quest, now that I think about it…

Bottom line: Would you like meta with that meta? Redshirts’ meta nature may make it difficult to sympathize with the Buffy-level snarky characters, but the three codas that end the book are achingly human. Mixed, but worth a shot.