What It Is by Lynda Barry 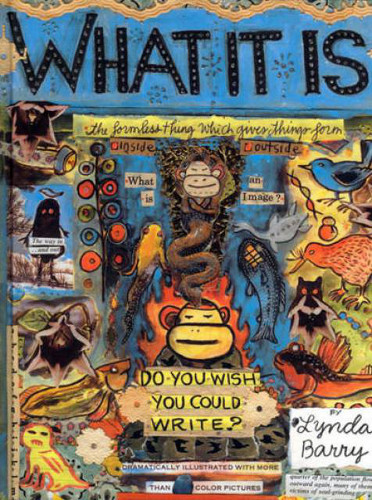 Part of my evolution as a writer over the last year has been realizing that I am much more of an editor or a literary critic than a creative writer. I mean, I’m still a creative writer to some degree. I’m not Paul Collins, who thinks the idea of characters escaping their writers is preposterous, because I’ve had characters decimate entire plot outlines by being smarter than I am. But there is a reason I’m an English Literature major, not a Creative Writing major. So why would I pick up a book pretty clearly aimed at a more traditional creative writer? Well, I’m trying to get my mother to write her memoirs and she does not subscribe to her daughter’s blunt way of leaping blind into new hobbies, so I’m vetting writing resources for her. Plus, I’ve heard a lot about Lynda Barry, so I thought it was time to get acquainted.

What It Is is half introduction to Barry’s creative writing methods and half a memoir about how she developed those creative writing methods, from her own oppressive childhood to her experiences in college where she took a class entitled “Images”, taught by Marilyn Frasca and Mark Levensky. By combining what she was taught with her own conclusions about the nature of creativity, Barry has forged a way to write centered around the images that stick with us, even if we don’t know they have.

In prepping this post, I came across a New York Times article about Barry’s “Writing the Unthinkable” classes, “Lynda Barry Will Make You Believe In Yourself”, which touches briefly on her own life as well as her method. (I wasn’t surprised to discover that Barry has long been friends with The Simpsons creator Matt Groening; her buck-toothed child version of herself brings to mind the cartoonish and endearing grotesque of Groening’s early work.) Ultimately, Barry’s writing method isn’t about perfecting your writing or checklists; it’s about letting the images pull you along. As the article points out, Barry believes that we inherently understand narrative and freeform methods of constructing them—thus children at play—but we suppress it as we grow up. Throughout What It Is, she offers exercises designed to get the words flowing. She insists on writing by hand and wants the pen in motion at all times. If the words dry up, doodle. Draw a spiral until they come back. But always keep it in motion. While she doesn’t say this, I conceptualize the exercise as a sort of net—while you’re utilizing Barry’s prompts (she says that she doesn’t want to think, just associate), keeping your pen in motion lets you capture anything that comes to you.

And therein lies the great value of What It Is. I’m analytical. It’s hard to turn off your inner editor when she happens to be all of you. Barry’s methods are designed to make you not think, but create. Of course, I’ve had to adapt them somewhat; I can’t handwrite as fast as I can think, so that’s not too useful for tricking myself into letting go, but I can touch type (digital native/Millennial/select the term that irritates you most!), so I can turn off my monitor and go to town without even the ability to look back at my writing. Not terribly useful for crafting narratives, both nonfictional and fictional, but useful for creating the stuff from which you craft it.

Plus, it’s full of equally useful and thought-provoking philosophical bits. One collage asks, “To following a wandering mind means having to get lost can you stand being lost?” (49). And it’s not just the small half-riddles littered throughout her collages; it’s the more (and very welcome) structured writing in her memoir portions. She identifies her childhood horror of Medusa with her own fear of her now-estranged mother and posits that children need certain monsters during their development. It put my heartstopping childhood and adolescent fear of zombies into a wildly new light. And that’s the barest tip of the iceberg here. Of course, there’s moments of off-kilter levity. The “writing kit” portion of the book is hosted by “the Magic Cephalopod” and a sea monster version of Barry called Sea-Ma. But the levity and the philosophy walk hand in hand, as Sea-Ma tells you what you’re going to need for this next exercise are “time, space, pencil, paper” (109).

But, as useful as I found What It Is, I must admit that it’s still a little beyond me. Collage is not an art form I’m particularly familiar with, so I hesitate to say anything about it, but it can feel haphazard at times, and I don’t think Barry goes beyond generating the raw material. For those who think they can’t write, it’s hugely important to divorce skill level from production—writing, after all, is only a verb, and you are only a writer so long as you write. (That’s why I loathe the phrase “aspiring writer”.) It’s hard to feel good about what you write if you’re comparing it to the top shelf stuff. But I also think that this is just the first step—but don’t forget to qualify that viewpoint with my analytical nature. I think this would be useful to my mother, as a way to get started, but I want to pair it with another text for the next step: carving your narrative of that verbal marble.

Bottom line: Lynda Barry’s half-memoir, half-manual What It Is wants to get you writing without thinking—associating, really, in an image-based method of generating raw material. Her philosophical collages are thought-provoking and her off-kilter sense of humor is warm. However, I’m not terribly familiar with collage and I feel like Barry doesn’t move to the next step of taking the raw material and polishing it. Worth a read.

2 thoughts on “Review: What It Is”