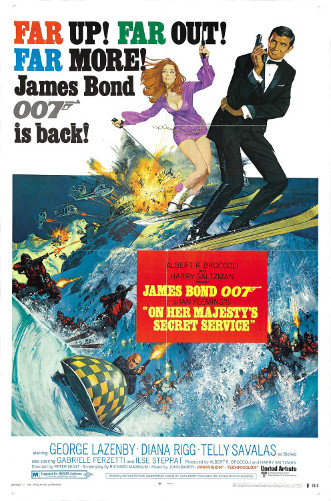 As a seasoned fan of Doctor Who (albeit not as seasoned as any of the old-schoolers to whom I tip my metaphorical hat), I have to admit—I really look forward to regenerations. I realize I’m spoiled, as they happen quickly on the new series, but there’s something exciting about seeing an actor’s take on a character who, despite his variations, manages to remain archetypical. So when it came time for George Lazenby’s crack at the man with the golden gun in my Bondathon, I was excited. On Her Majesty’s Secret Service is usually only remembered for its last five minutes by casual fans, but I think deserves a bit of a better reputation.

On Her Majesty’s Secret Service finds MI6 agent James Bond continuing his investigations into the whereabouts of the evil Blofeld, two years after the events of You Only Live Twice, to the chagrin of his higher-ups, who put him off the case. But Bond finds an unusual lead when he rescues Countess Teresa “Tracy” di Vicenzo from a suicide attempt. Tracy’s father, the Corsican crime lord Marc-Ange Draco, knows Blofeld’s whereabouts. He’ll give them to Bond… under the condition that he marry Tracy. Bond declines, but he and Tracy grow closer, even as Bond draws nearer and nearer to exacting revenge on Blofeld. But is he ready for Blofeld’s latest and greatest scheme?

Sean Connery had intended to leave the role of James Bond before You Only Live Twice; after all, it’s not exactly Shakespeare, and when it’s your fifth time at bat, you can get bored. But producers Albert R. Broccoli and Harry Saltzman soothed him over with more money to get You Only Live Twice in the can. But they knew time was short, and started scouting for the next James Bond. (Now, it’s a fun game; then, it must have been nerve-wrecking.) Thus: George Lazenby, whose sudden departure from the role was motivated by his conviction Bond was on the way out (oops) and precipitated by his unprofessionalism on set. But those tensions don’t touch Lazenby’s Bond, a graceful, tall, and good-natured creature. I think it’s this good nature that makes him seem less vivid than the other Bonds; this is a Bond who can step into the background and does. And he’s capable; his first scene finds him fending off goons right and left. The scene is backlit by a setting sun and keeps Lazenby in silhouette, reminding me of nothing so much as Daniel Craig’s brutal rooftop battle in Skyfall. Obviously, Craig’s physicality is intimidating and honestly terrifying, but Lazenby’s is simply strong, supple, and did I mention tall? We also actually see this Bond do super-spy things other than bedding beautiful women and beating up people; while Lazenby has his voice dubbed, his entire stint impersonating Sir Hillary Bray, a fussy genealogist, is very enjoyable. And, because I enjoy Bond failing, it delighted me to see that this Bond is so good-natured that his inappropriate one-liners don’t work. (“He’s got a lot of guts!” is a particular stinker.)

And that good nature extends to the rest of the film. The Bond films are not known for their veracity of adaptation—at a certain point in this Bondathon, I’ll stop referencing the novel and simply reference the characters instead—but On Her Majesty’s Secret Service actually is quite faithful to the novel, adjusting for the continuity snarls inherent in adapting a book series out of order and while it’s being published. (James Bond and Harry Potter: they’re closer than you might think.) It feels anchored a bit more in the real world. The violence feels a little meatier (aforementioned guts sequence set aside) and there are consequences. This is the only twentieth century Bond film I’ve seen where Bond has been allowed to look less than cool, beaten, or scared. Of course, Tracy’s father uses hyper-problematic language discussing his daughter’s depression (“SHE NEEDS A MAN TO DOMINATE HER!”) and there’s still a bevy of buxom maidens, all being used by Blofeld in one of the better Bond villain schemes. But despite that, I remain utterly charmed that the pluckiest one (the fantastically named Ruby Bartlett) flirts with Bond by writing on his inner thigh while he’s wearing a kilt, because it offers a cheekier and, if not entirely egalitarian, at least more egalitarian view towards sex in the Bond universe.

And this is the film where Bond meets the woman he’d happily give up MI6 for; seriously, they have a conversation about their future while snowed in a barn, and Bond tells her that he’ll have to find another job, because he’s not not marrying her. For someone who has never seen a frame of The Avengers, I’m quite fond of Diana Rigg, due to her work in The Mrs. Bradley Mysteries. I even watched that series’ first episode right before turning on On Her Majesty’s Secret Service. Tracy is desperate, shrewd, and generous of spirit, and, despite the inauspicious beginning to their relationship, it’s a delight to see her open up with Bond—as well as getting the upper hand on him, rescuing him, and handling herself well in a tight spot. (Her driving skills are a delight, due to her dexterity and the fact they derive from a misspent, partying youth.) There’s a moment where, as they escape on skis, Tracy jumps a house elegantly; Bond is obviously charmed by this, but the film feels no need to have him execute a greater stunt. I think that really captures why I like them as a couple so much—they’re comfortable with each other, and seeing James Bond draw comfort and joy from something that is not being a secret agent is a bit of a subversive thrill. I don’t know if this will end up being one of my top five Bond films, but, from where I’m standing right now, it’s quite a good-natured and more sexually egalitarian romp. And the ending… oh, my heart.

I bought this movie on iTunes.