What is best in life? Books and cake, obviously. As part of the townsfolk’s continuing commitment to keeping East Atlanta weird (as a bumper sticker once extolled me to), the Literacy Volunteers of Atlanta annually host the delightful Edible Books Festival. The title says it all, really; entries must be edible and “bookish” (as well as smaller than twenty square inches). Most entries are cake, as were all of this year’s, but fruits and vegetables are more than welcome. There are three categories: children’s, home chefs, and professional chefs. All the entries are auctioned off and the proceeds go towards helping adult literacy in the city. Everybody wins! I had no idea this event existed until a friend of mine entered her own cake into the competition, and, naturally, I declared I would attend and purchase myself a cake handcrafted by a small child. If my nephew is going to smash up his lovingly baked first birthday cake, obviously the inverse must occur first. (This post contains a lot of photos. Do we still warn for that? We certainly should.)

So off I trotted down to the Art Institute of Atlanta-Decatur to support my friend, ogle some bookish cakes, and select my cake. The first category on display was the children’s category, which included The Wheels on the Bus, complete with Oreo wheels and gumdrop lights… 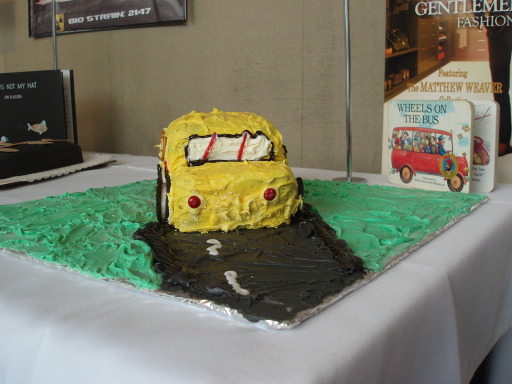 …Jon Klassen’s This Is Not My Hat, featuring some remarkable fondant work for a kid…

…and the inscrutable cake I came to know as Cheese Touch. 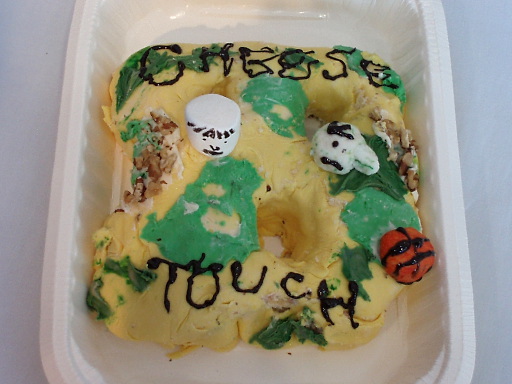 One of the volunteers thought it read “Chinese Touch”. My friends and I stared at Cheese Touch, utterly bewildered. After an appropriate moment of outrageous speculation, I whipped out my phone and discovered that this cake was inspired by The Diary of a Wimpy Kid series. The Cheese Touch is a form of cooties, which you contract after touching a piece of moldy cheese festering on the basketball court. Suddenly, the design choices made some sense: the tiny, lop-sided basketball, the holes in the cake, the well marshmallow child and the melting, unwell fondant child. (The walnuts remained inscrutable.)

Mystery solved, it was time to move onto the professional chefs’ entries, starting with the stand-out piece of the festival, the Alice in Wonderland cake.

The details on this cake are utterly astonishing, from the white roses half-painted red… 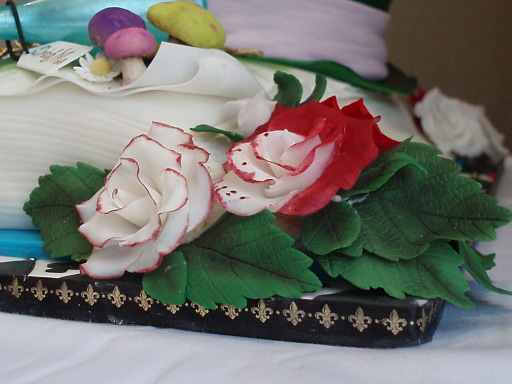 …to the miniature fondant tea set. 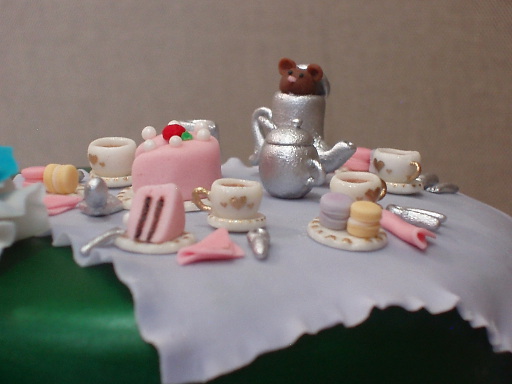 But even taller than The Wizard of Oz cake was the “Rapunzel” cake, which featured a tower made out of Rice Krispies and fondant.

And tucked away inside the tower is a tiny fondant Rapunzel, complete with details on her clothes and tattered curtains for her window.

The only Harry Potter entry was a Sorting Hat cake. It was liberally dusted with cocoa powder, so I kept advising people who walked by it to take a deep whiff of it.

I didn’t manage to get a proper picture of this “Sleeping Beauty” cake (which is definitely now demolished, as it went home with a guy I know for his birthday party) which featuring the prince squaring off against the dragon, but I am awfully fond of the little fondant prince’s expression and the texturing of his skin. I’ll have to check in to see if he was delicious. 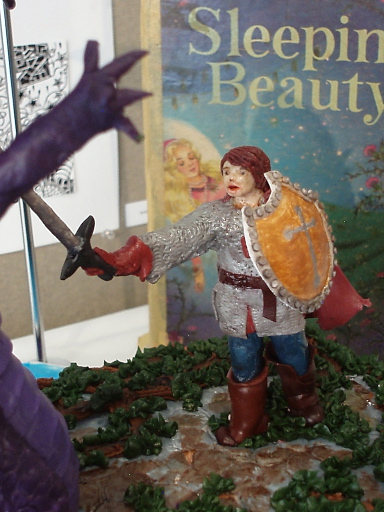 And the last entry in the professional chef category was an interpretation of Antoine de Saint-Exupéry’s The Little Prince.

The home chef category started off with The Hungry Caterpillar… 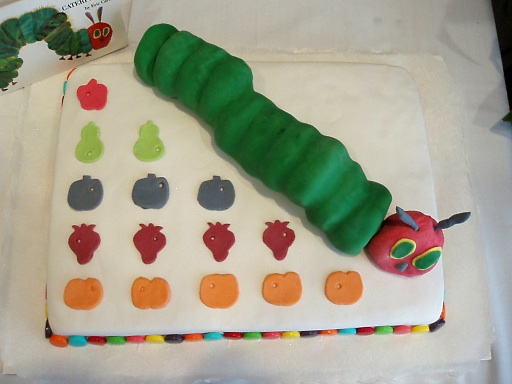 …followed by this interpretation of Charlotte’s Web. All of that straw? Yeah, that’s toasted coconut shavings. It smelled heavenly. There’s starting to be a finer and finer line between amateur and professional chefs these days, and this one particularly proved that. 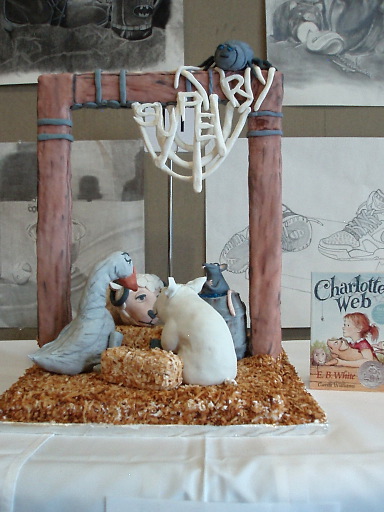 The Green Eggs and Ham entry, the first of the two Dr. Seuss entries, was the only one to actually mention what flavor the cake was. It was heavily composed of chocolate and bacon. We wondered if the skillet was included in the auction; it, sadly, was not. (Not like I need a skillet in my kitchenless dormitory, but hush up.) 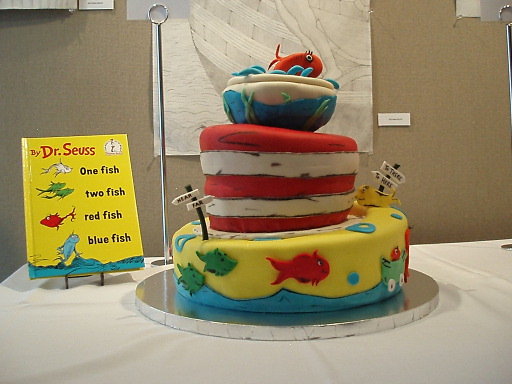 And the last entry in the entire show was my friend’s! It was the only cake based on adult nonfiction: Richard Rhodes’ The Making of the Atomic Bomb. I almost color-corrected this photo, but I think the orange lighting is a nice touch for this cake. The decorations are mushroom clouds, obviously, but the chocolate piece on top is Chocolheimer, a chocolate Oppenheimer in a circle inspired by Indian art. It’s actually supposed to sit on top, but, between being set out for the show and my arrival, it shattered. We presume under the weight of what it had wrought. 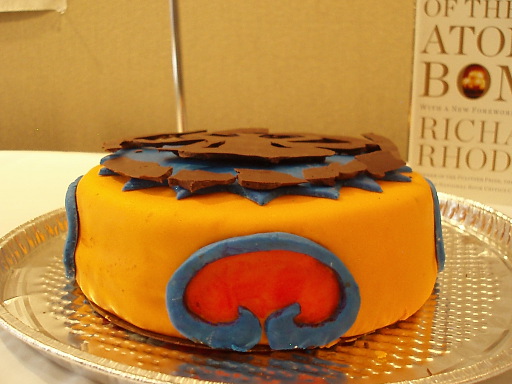 After viewing the cakes, my friends and I wandered off for coffee and exploration before returning for the results of both the people’s choice awards (The Wheels on the Bus, even though we totally stuffed the ballot box!) and the silent auctions. I’m not sure how much the Literacy Volunteers of Atlanta raised, but some of the cakes were going for sixty dollars. And that’s absolutely a pittance for some of these beauties: the Alice in Wonderland cake took eighty hours of labor, according to its creator. I bid on two cakes myself. I had a passing fantasy of devouring the Hufflepuff corner of the Sorting Hat cake, but, alas, bidding on that went up to forty bucks and I needed to buy dinner later that night. What cake did I walk away with?

(Yes, I watched Harold and Maude on Thursday, why do you ask?) Why, Cheese Touch, of course! I swore to demolish a child’s cake and lo and behold, I did. With help, of course. Fondant is kinda gross. 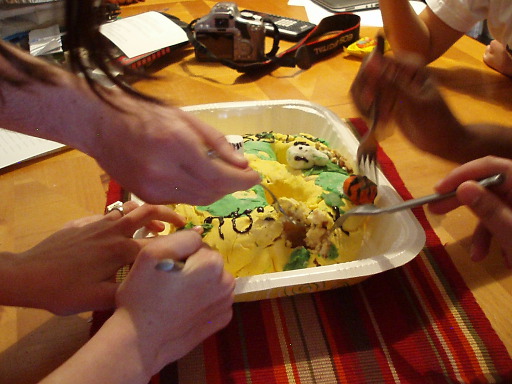 Well, that was my yesterday, essentially; after that, my friends and I watched Lifetime movies and chatted into the night. (We also hit up an Indian place where I got nehari so hot I almost cried. It was beautiful.) Otherwise, it’s my first week of classes after spring break, and I’m getting back into the swing of things. I did finish The Song of Achilles this week and start We Killed (an oral history of women in American comedy!), but haven’t done much reading outside of that. I plan on getting some quality reading done today.

The judges’ choice was the Alice in Wonderland cake; what’s your favorite?

6 thoughts on “The Sunday Salon: The Edible Book Festival (Or, Cheese Touch: A Love Story)”