The Love Song of Jonny Valentine by Teddy Wayne 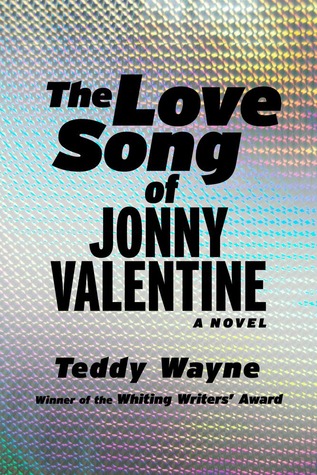 This has got to be one of the fastest turnarounds on a recommendation I’ve ever managed. I read Michiko Kakutani’s review of The Love Song of Jonny Valentine in The New York Times at the end of January, when it was published, and I picked it up in March when I stumbled across it in my hometown’s public library. I have a weak spot for books transparently inspired by celebrities (thus Plastic Jesus and Between You and Me), and The Love Song of Jonny Valentine clearly patterns itself after the life of Justin Bieber. Bieber is an easy target, though, so it took Kakutani’s review to convince me I should give it a whirl.

The Love Song of Jonny Valentine finds “the Angel of Pop”, eleven-year-old pop superstar Jonny Valentine, on his second tour,Valentine Days, which will end with a huge show at Madison Square Garden on Valentine’s Day. But Jonny’s sophomore effort isn’t doing as well as his label would like, and his manager and mother, Jane, is doing her best to protect his interests and push him to be the best he can be. But when Jonny stumbles across a way to contact his long-absent father, he begins to wonder if this life is what he wanted.

In making Jonny significantly younger than Bieber (who played Madison Square Garden at sixteen), Wayne has given himself a unique challenge—write an entire novel from the perspective of a self-absorbed and undersocialized eleven-year-old boy. If you can’t stand run-on sentences, this isn’t for you. At one point, Jonny’s label proposes that he should embark on a fake relationship with Lisa Pinto, a preteen Latina actress trying to break into music (so, Selena Gomez, for those of you playing at home). Jonny hopes that they might start dating for real, but when he meets her, he’s so intimidated by her intellect and vocabulary that he never tries again. Jonny’s voice sounds real and authentic, because the attention to detail never forgets that he’s a scared kid underneath it all. When Jonny begins to idolize Zack, the lead singer of the indie band the Latchkeys, he thinks about all the things he wants to tell Zack, but won’t, because “it might sound gay”. Imagine how difficult learning to effectively communicate is when you’re both a preteen boy (who are not known for articulating their emotions) and a pop star whose every word is watched. When Jonny tries to defend his mother on a late night talk show, the label calls to tell him to cool it. What else can Jonny do but either implode or pin all his hopes on meeting his father again?

In fact, belying the novel’s dizzily prismatic cover, The Love Song of Jonny Valentine is not a parody of Justin Bieber’s life (as it’s too sincere), but, rather, about the birth of a monster. The first thing a reader will encounter with Jonny is how he’s both utterly a child and weirdly an adult; he rattles off marketing jargon like gospel, obsesses over his body and the bodies of others, and blithely understands the philosophical implications of how his screaming fans love him. And his childish attempts at lashing out at his mother and his support system feel too calculating for a regular teenage boy—he eats dairy before a show, attempts to throw a concert, and uses his fame to, memorably, shame a producer’s son at the boy’s birthday party. Jonny’s idol is Michael Jackson, whom he refers to as MJ: he wants to make music that forces people up out of their seats, and he’ll do anything to achieve that end. The novel actually opens with Jonny carelessly discussing the bass lines of “Like a Virgin”, “Billie Jean”, and “I Can’t Help Myself”. (I made a Spotify playlist for this novel, actually, because I make playlists all the time.) Thinking about the novel in the context of the ending actually makes it quite chilling for me.

To parallel Jonny’s emotional journey, Wayne has given Jonny a game called The Secret Land of Zenon, an unconventional video game where the point is exploring both the world and other options instead of traditional combat. Unfortunately, it makes all of the wonderful subtext of the novel blunt text, even as it gives us the stomach punch of an ending. I don’t wish it had been taken out, but I do wish it had been dialed down to let the story breathe a bit more. Additionally, there’s a plot thread about Jonny trying to successfully masturbate that might turn off some readers—I found it worked, more or less, in context of who Jonny is and the product he’s selling, but, like the video game, it does feel awkward in how it tries to make the novel’s subtext just plain old text. So there’s that.

Bottom line: The Love Song of Jonny Valentine isn’t a parody of Justin Bieber’s life—it’s the birth of a monster, as we watch the eponymous superstar try to come to terms with his life without having the ability to articulate much about it or how he feels about it. The novel occasionally ruins its beautiful subtext by awkwardly and bluntly making it text, in the cases of a video game Jonny plays and Jonny’s sexuality, but it’s still worth a shot.

2 thoughts on “Review: The Love Song of Jonny Valentine”