Treasure Island
based on the novel by Robert Louis Stevenson 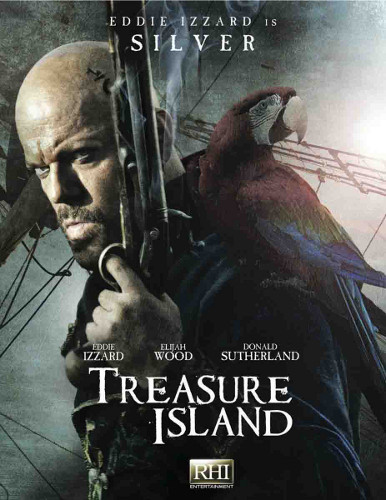 As my friend Natalya and I witnessed this BSkyB adaptation of Treasure Island, we both became increasingly aware that the only real memory of Treasure Island we had was via Muppet Treasure Island, one of my favorite movies as a kid. (At the very least, one of the movies I actually remember seeing as a kid, which could really mean anything. But I am fond of it and wish desperately find the soundtrack at an affordable price.) I’ve never read the original novel or been moved to; in fact, the main reason we were watching was because Eddie Izzard was playing Long John Silver, a role we didn’t have to map to a Muppet to piece out.

Treasure Island opens with Captain Flint, a old pirate captain, abandoning his crew adrift on the sea while he and a select few bury the treasure they stole together. Three years later, one of those select few, Billy Bones, turns up at an inn owned by Mrs. Hawkins and her son, Jim, whom he hires to look out for any seafaring man. When the seafaring man comes for Billy and a map Billy swears he doesn’t have, Jim, in an effort to protect the inn, steals it, but soon realizes that the treasure the map leads to could save the inn and give his widowed mother a better life. With the help of Squire Trelawney and Dr. Livesey, Jim sets out on a expedition to find the treasure—but the crew of this new ship? Well, that’s the crew Captain Flint would have abandoned, down to Long John Silver, a man hellbent on getting what’s his.

Treasure Island, for all the moral ambiguity inherent in Long John Silver (a ruthless thief and murderer who nevertheless takes a honest shine to Jim), is still very much a cheerful children’s novel, in my purview. Adventure! Coming of age! Buckling some swash! Swash remains firmly unbuckled in this particular adaptation, however. (Have I told you about Unbuckled Swash, my pirate-themed Mumford and Sons cover band?) This isn’t to say that there’s not action—there’s plenty of it, once things get going—but Treasure Island is unrelentingly dark. Looking over the events of the novel, this adaptation seems very faithful, but the tone is dark. There’s little hope in this universe; it’s Jim’s, and we spend the film watching it be squashed as the seafaring life proves to be anything but fun. Natalya and I had to laugh out loud at the end of the film, when Long John Silver tells Jim to seek him out if he ever wants adventure, because there is no way this Jim is ever getting on a boat ever again.

Not for lack of trying on Silver’s part, however—Izzard’s Silver is as charismatic, snarky (eagle-eyed British comedy nerds will wonder if some events are specifically echoing famous Izzard bits), and slippery as you could hope for. Since the adaptation gives the backstory first (like many adaptations, like Muppet Treasure Island and Treasure Planet, also known as “the only Treasure Island adaptations I have ever cared about”), the film is much more about Silver, although it doesn’t excuse his behavior. Alibe, his wife, is elaborated on (in a sadly unnecessary side plot about what’s going on with Mrs. Hawkins during the film), and one of the most heartbreaking moments is Alibe and Silver, in different parts of the world, independently realizing that their dream of carriages, fine clothes, and safety is probably never going to happen. Jim is almost secondary, although he’s played capably by Tony Regbo, who Natalya and I have concluded is in fact the bastard love child of Benedict Cumberbatch and Cillian Murphy. Look at him and tell us we’re wrong. The other standouts include Elijah Wood as a very different Ben Gunn, in one of the few departures from the novel (there are some), and the ever-perfect Shirley Henderson as Mrs. Hawkins.

As a three-hour television film (I feel like miniseries is a misnomer when there’s only two episodes, surely?), you might be excused for thinking it might be slow, but while the pace is certainly leisurely, it never drags. It simply feels like it’s taking its time, although the brief sideplot concerning Alibe, Mrs. Hawkins, and Julian Barratt is not particularly necessary. (We hoped that it would turn into Thelma & Louise. It did not.) The cinematography is a bit more than I would expect for a television film, although several of the stylistic flourishes can feel a little amateurish, as they lack the motivation. Still, the natural lighting is remarkably impeccable, managing to communicate heat, oppression, and sickliness all at the same time. A fun romp this ain’t, unless, like us, you keep up a running commentary on Ben Gunn’s years on the island. (I cannot recommend riffing enough. It is truly an art form, and nothing teaches you self-restraint like seeing a movie in theaters and trying not to whisper jokes in your friends’ ears.)

Bottom line: An interesting adaptation of Treasure Island with solid performances and remarkably high-end cinematography for the television audience, but it’s so unrelentingly dark. Worth a watch, but heads up.

I watched this film on Netflix Instant.