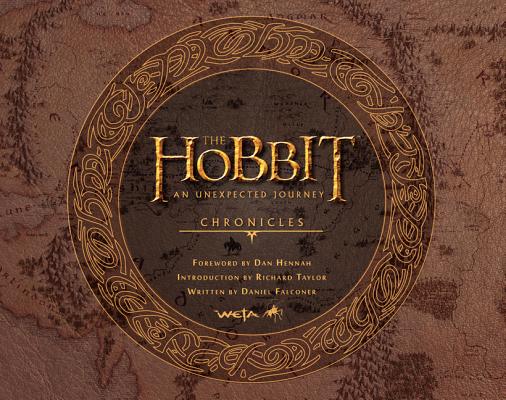 Is that not one of the most unwieldy titles I’ve had to format for the blog or what? As a fantasy fan reared on video games, I consider myself fairly immune to convoluted titling, but this, I think, takes the cake, with two subsections. Yeesh. Anyway, the book itself. Despite my sighs over The Hobbit: An Unexpected Journey, Jackson’s Middle-Earth remains a large part of my internal landscape, so I was touched to my core when my awesome friend Natalya presented me with this amazing gift for Christmas. (Also: Natalya totally needs to get a blog, so all the world may come marvel at her amazing insights into film.)

The Hobbit: An Unexpected Journey Chronicles — Art & Design (whew!) is the first in a series of books produced by Weta Workshop, the award-winning special effects and prop company who brought you Xena: Warrior Princess, Hellboy, and, of course, The Lord of the Rings trilogy. With over one thousand illustrations, the book examines the detail and thought that went into every piece on-screen—and occasionally off-screen!—seen in the film, from pipes to clothes to entire sets. Every illustration is accompanied by commentary from the good people at Weta Workshop themselves, from costume designer Ann Maskrey to concept art directors Alan Lee and John Howe to the head of Weta Workshop, Richard Taylor.

As we know, I had mixed feelings about The Hobbit: An Unexpected Journey, but when it worked, I was back home in a specific vision of Middle-Earth that ruled my childhood. And Weta Workshop? Well, Weta Workshop feels like family to me. In an episode of The Nerdist whose number escapes me, Chris Hardwick posits that the reason that people get overinvested in celebrities is because, to us, we see them every day on the old magic box, which our lizard brain understands to be bond-forming, so there’s a disconnect when we realize that the bond is one-sided. And this is completely true for me, given the amount of times I’ve watched the behind-the-scenes features for The Lord of the Rings. I flipped out when I saw Brett Beattie in a The Hobbit production video. So making my way through this book was like the best kind of family reunion, where everybody is familiar, good-natured, and actually interesting to talk to, even the new additions. Ann Maskrey still has a long way to go to impress me, but I miss my beloved Ngila Dickson a little less now. Everyone still brings to the table the attention to detail and thoughtfulness that blew my mind as a preteen, and, given how a lot of that does get buried in the actual film itself, it’s a blessing to have it collected.

Because some of it—well, most of it—is just stunning. I almost barked when I opened up the book and found detailed concept art for one version of the film’s opening, which features Gandalf meeting the child Bilbo and walking away with an impression of a hobbit who is not adverse to a little adventure, hence his utter disappointment when meeting Bilbo again at the beginning of the story proper. It looked so wonderful—lady hobbits (including the formidable Belladonna Took!), the Shire as magical, and the reconstruction of the Green Dragon Inn. (John Howe mentions his disbelief over the fact that, despite being one of the most popular film franchises of all time, nobody got a clear picture of the damn thing!) I yearn for its inclusion on the extended edition DVD, so that my perfect cut of the film will include it and exclude the The Fellowship of the Ring frame story. Each dwarf has a few pages discussing the design process, complete with progress photos, as does, and I was utterly delighted to find concept art of dwarf women with sweet, ladylike beards played decidedly not for laughs. While the comments are short and sweet—this is a coffee table book with no pretensions to being anything else—there’s still plenty of room for the Weta-ites to strut their stuff. Nick Weir, the Prop Master, discusses designing the gear for the dwarves’ ponies, which all start out with acquired Gondorian or Rohirric equipment, since the dwarves don’t use horses enough to justify saddle shops of their very own. And this is all just barely scratching the surface; I look forward to the next entries in this series, even if the next two films disappoint me.

It’s quite a gorgeous coffee table book—textured cover, fold-out replica of Thorin’s Map a fold-out section on Bilbo’s contract, and all the glossy paper you would want. Obviously, the holidays have passed, but if you have Ringers with spring birthdays, this is a nice addition to their collections, even if they were iffy on the film.

Bottom line: The Hobbit: An Unexpected Journey Chronicles — Art & Design is a gorgeous coffee table book for your Ringer friends, even if they didn’t like the film. It puts the stunning work of Weta Workshop on display and even offers insight into a way the film’s opening could have worked properly. Nice!

I received this book as a gift from a friend.