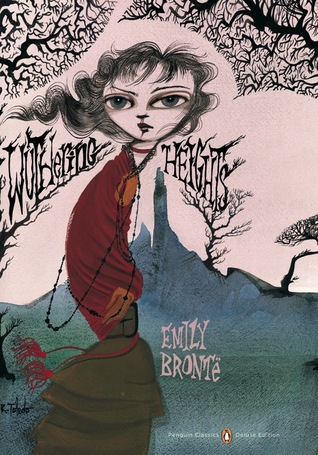 All I know about Wuthering Heights comes from watching Noel Fielding’s performance of Kate Bush’s “Wuthering Heights” on Let’s Dance for Comic Relief over and over again. (I have extraordinarily specific tastes.) I wasn’t a particularly well-read child, as we’ve discussed, but that came with a blessing—I apparently missed the formative experience of reading Wuthering Heights as a teenager, finding it swooningly romantic, and then realizing, as an adult, how messed up Cathy and Heathcliff’s relationship was. A bullet dodged, but dodged at the expense of experiencing the novel. At some point during research for my Jane Eyre thesis, I determined that I would finally catch up with the rest of the women in my department and read Wuthering Heights. It took me my entire winter break, but I did it.

Wuthering Heights opens with Mr. Lockwood renting Thrushcross Grange in Northern England to escape the world, but if Mr. Lockwood thought he was antisocial, he’s got nothing on Mr. Heathcliff, his neighbor and landlord at Wuthering Heights. When he asks his housekeeper, Ellen Dean, what Heathcliff’s story is, she regales him with a tale a lifetime in the making. Once, the Earnshaw family, with their children Hindley and Catherine, took in the young Heathcliff at the behest of their father. While Hindley and Heathcliff hated each other at first sight, Catherine and Heathcliff share a powerful, passionate, and destructive bond. When Catherine marries a neighbor instead, Heathcliff vanishes—and returns three years later, ready to wreck revenge on the Earnshaws and the Lintons, the family they married into, generation after generation.

Over the past fall, I’ve been quite intimate with Jane Eyre, so I came into Wuthering Heights a little cocky; I knew what to expect. Of course, Emily and Charlotte are different women, and, while they share certain characteristics, these are different novels. While Jane Eyre includes the thunderous but ultimately tamable Mr. Rochester, Wuthering Heights is sharp, painful, and raw. This is, obviously, not a happy book, although things end well—it feels much more like history righting itself than joy for the last characters standing. While Catherine and Heathcliff’s relationship consumes the first half of the novel (and them), Brontë continues on to focus on the legacy of such pain and suffering. Through Heathcliff’s own machinations, the second generation has a situation much like the first—a passionate, intelligent young woman, the inferior mate, the abused servant. But history does not have to repeat itself, and, in a sense, even Heathcliff, who is considered by everyone (including himself) a supernatural force of nature, cannot stand up to the ravages of time.

I have a particular thing for passionate couples who are bad for each other. I think this stems from reading Little Women and seeing Jo explain why she and Laurie wouldn’t work together, and much preferring that they’d burned out spectacularly in a few years instead of having had happy lives with people I didn’t want them to marry. I am selfish this way. So watching Catherine and Heathcliff rage at each other was exactly what I wanted and expected out of the novel. In fact, pop culture osmosis had made me expect Catherine to be less of an agent, but she gives as much as she gets; there’s much hair-pulling and snarling and hurting people who hurt the other. While it’s clearly a physical and romantic relationship, it’s also an all-consuming one; Catherine confides to Ellen that, while she will marry Edgar Linton instead (Heathcliff is out of the question), she knows that she and Heathcliff share the same soul. But for all this talk of souls, painful partings, and grave diggings, Catherine also harbors no illusions about Heathcliff. When Isabella Linton falls in love with Heathcliff, romanticizing as teenage girls have done with him for centuries, she, while trying to remain kind to Isabella, tells her in no uncertain terms about Heathcliff’s true nature. He is wild, fierce, wolfish, and utterly no good; Catherine might have a deep connection with him, but that is a particular and unhappy case. I mean, seeing a novel deconstruct itself is always nice to see, but to see Wuthering Heights actively reach out to the reader and show Heathcliff’s true colors to those who might romanticize his violence and his abuse is just stunning.

I’ve been warned about the frame story by friends for a few years now. I could have done without Lockwood, to be honest; he’s merely a device for Ellen Dean to talk to, the actual narrator and one of the most interesting characters in the novel in her own right. Ellen’s position in the Earnshaw and later Heathcliff household gives her a unique perspective, and her character can’t help but shine through—an ordinary woman who wants to do the right thing, but is forever concerned, in this peculiar circumstances, that she is actually doing the right thing. She tries to be kind to the young Heathcliff, but her efforts are thwarted by masculine posturing; she tries to raise young Hareton, Hindley’s son, correctly, but is taken away from him too soon by the vagaries of her position as hired help. She can be funny—she won’t put up with children throwing tantrums and being melodramatic—and she can be brutally touching. Upon Catherine’s death, she asks Mr. Lockwood if someone as passionate, tempestuous, and violent as Catherine could ever be happy in heaven, and you can feel her mourning the little girl she used to know but could not tempt to human decency.

This is, of course, barely scratching the surface; I look forward to using my last few months of access to literature journals to read a bit more about topics I don’t have any background in. But, having finally met Wuthering Heights on its own terms, I can already feel it haunting me.

Bottom line: Emily Bronte’s Wuthering Heights is a sharp, painful, and raw novel, focused around the consequences of a relationship that violently consumes two people and how it affects the world around them. Dark and glorious.

I downloaded this digital book from the Kindle Store.