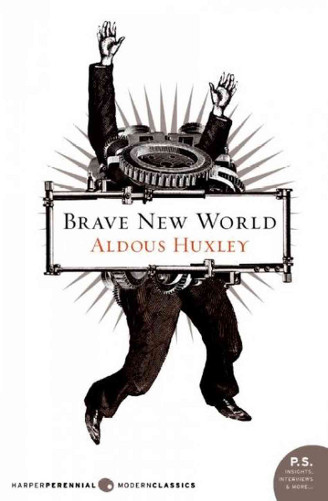 Aldous Huxley’s tour de force, Brave New World is a darkly satiric vision of a “utopian” future—where humans are genetically bred and pharmaceutically anesthetized to passively serve a ruling order. A powerful work of speculative fiction that has enthralled and terrified readers for generations, it remains remarkably relevant to this day as both a warning to be heeded as we head into tomorrow and as thought-provoking, satisfying entertainment.

You know how I say that I was raised by wolves because it’s much easier than explaining the actual circumstances that led to a grown woman working her way through the Beatles discography for the first time this week? Behold yet another casualty. A lot of people are introduced to Brave New World in school—I stumbled across Penguin’s .pdf handout for teachers while researching for this post—but my powers of cultural repulsion are second-to-none. But I think, as I dig deeper into the early years of fantasy and science fiction, it is time.

Iris at Iris on Books had difficulty connecting with the material, citing the always dicey proposition of reading a classic that’s so influential returning to it feels not so fresh. Carrie at Books and Movies found it well-written, but too dire. Heather at Between the Covers loved it. Kim at Bold Blue Adventure found it to be much more of an idea novel than she preferred.

Brave New World was published in 1932.