The King of Elfland’s Daughter by Lord Dunsany 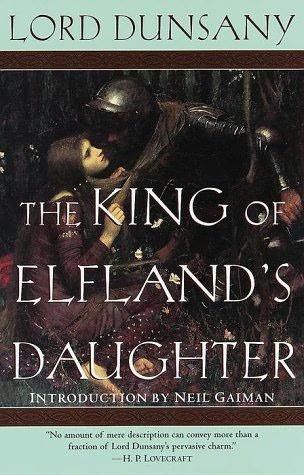 2013 looks like it’s shaping up to be the year I start exploring, in a little more seriousness, pre-Tolkien fantasy. I’ve always been fascinated by the early development of fantasy before Tolkien’s devotees accidentally crystallized the genre, and Renay and I have mentioned perhaps teaming up on some of these works. But I’m forging ahead now because I’ve heard one too many people say, “Oh, I don’t read fantasy“, and it’s either get started on this or get started on learning to spit acid. So it’s off to my other motherland with Anglo-Irish writer Lord Dunsany and his influential 1924 novel.

The King of Elfland’s Daughter opens with the Lord of the Valley of Erl, a very ordinary place, being asked by his people’s parliament to provide them with a magic lord. Ever dutiful, he instructs his son, Alveric, to travel to Elfland to marry Lirazel, the princess of Elfland. Once back in the mortal world, Lirazel bears Alveric a son, the desired magic lord, but remains out of place among her husband’s people. But when Lirazel returns to Elfland, Alveric goes on a hopeless quest to fetch her back, leaving the Valley of Erl, now in the care of their son, to contend with its desire for magic and how disturbed it is by the real thing.

Of Kate Bernheimer’s four signifiers of fairy tales outlined in “Fairy Tale is Form, Form is Fairy Tale“—flatness, abstraction, intuitive logic, and normalized magic—The King of Elfland’s Daughter only barely qualifies for the first, and yet, this is so clearly a classical fairy tale. Although we see into the mind of Lirazel as she struggles with her love for Alveric and her love for Elfland, although it’s full of loving detail, although motivations are given, and although magic is something to be feared, there’s a formality to the language and the approach to the story that renders it thusly. In his introduction to the 1999 Del Rey Impact edition of the novel, Neil Gaiman calls Lord Dunsany’s prose “like those of a poet who got drunk on the prose of the King James Bible” (xii). Its formality almost makes it more vivid, able to encompass both the alien, still, and fearful beauty of Elfland and Ziroonderel, the witch, telling Alveric to not be an idiot and put two magical artifacts together, what are you, new? Okay, it’s only three lines, but it makes me smile just to think about it.

In any case, this is gorgeous stuff. I’ve been in a cinematic slant of mind this month, with the documentary The Story of Film filling much of my free time, but I think The King of Elfland’s Daughter would have ignited it anyway. Lord Dunsany’s imagery is so potent and so fresh, almost a century later. Elfland’s over-saturated, stagnant beauty still sings, as does Alveric’s desperate quest to find Elfland again and the witch Ziroonderel’s withering, glittering moral ambiguity. (You may have guessed that she’s my favorite character.) Lirazel and Alveric’s son, Orion, spends much of his time hunting unicorns who cross the barrier, and, while they can make the middle sag a bit, it’s still thrilling. Undoubtedly, Lord Dunsany’s habit of worldbuilding while hunting influences these passages. But the best comes at the end, as the tension between the Valley of Erl’s Freer (a paper-thin disguise for a friar) and Elfland itself gives us astonishing chiaroscuro that, I think, will remain with me for quite some time.

There’s no real quest here—well, there’s Alveric, but the point is that his quest is doomed. It’s Lirazel who ultimately finds him again, actually. In the story of fantasy, that becomes bog standard later. Rather, Lord Dunsany (who rarely revised his work) is more interested in contrasting the mundane world and the fantastical world; he includes the character of Luluru, a troll (more of a gnome, really), who is as fascinated with the mortal world as Orion is fascinated with his mother’s world. Neither is presented as superior to the other, despite the religious clash between a sort of female paganism (Ziroonderel is referred to as “Mother Witch” and insists on the importance of magic to life, while Lirazel is moved to worship the stars) and Christianity (here deemed Christom, to continue the paper-thin disguise), although few readers will close the novel and still think it was right to want magic that wasn’t theirs for themselves.

It’s such rich stuff that I want to sit down and dig through this in the context of Lord Dunsany’s life, given his politically loaded status as an Anglo-Irish aristocrat during the Irish War of Independence, if someone hasn’t already. I mean, an Anglo-Irish writer writing about ordinary people and the fair folk? Some have theorized that the historical inspiration for Ireland’s fair folk were, in fact, the indigenous population or previous settlers who had been pushed back by new ones. (And I totally missed the deadline for independent study this last semester at school!) Heck, I’ll settle for a biography of the man; Lord Dunsany was the pistol-shooting champion of Ireland, the chess champion of Ireland (he invented a kind of chess, for Pete’s sake!), and president of the West Kent branch of the Royal Society for the Prevention of Cruelty to Animals. What a guy.

Bottom line: The King of Elfland’s Daughter is only a fairy tale by its gorgeous, formal language, but it’s one nevertheless, rich with themes and images that will sear themselves into your imagination, fresh and potent even ninety years later. Required reading for fantasy fans.

11 thoughts on “Review: The King of Elfland’s Daughter”