Gollum: How We Made Movie Magic by Andy Serkis 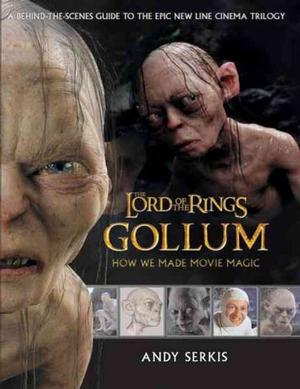 In 2003, my friend Natalya used to come from school and read Gollum: How We Made Movie Magic every afternoon. Or so she told me when she heartily recommended this me. From 2001 to 2004, there were plenty of film tie-in books to sate budding Ringers like ourselves, ranging from simple visual companions to gorgeous art books, such as The Art of the Lord of the Rings. (Side note: Ngila Dickson should totally write an autobiography. I’d read the living daylights out of that.) With my mixed feelings towards The Hobbit: An Unexpected Journey, I couldn’t help picking this up when I saw it at a used bookstore to revisit Middle-Earth Mark I.

Gollum: How We Made Movie Magic, published before the release of The Return of the King, is actor Andy Serkis’ account of his work on Peter Jackson’s The Lord of the Rings film trilogy. Initially hired to provide a voice-over for a CGI creation, Serkis’ intense audition convinced Jackson that Serkis should be more involved with the character, leading to the films’ groundbreaking use of motion capture, CGI, and old-fashioned rotoscoping to create the first truly life-like CG character in a live-action film.

I didn’t expect much from Gollum: How We Made Movie Magic. The book’s formatting and its handy demarcation as a book for “Ages 8 and up” seemed to put it firmly on the visual companion spectrum of movie tie-ins—simple, straight-forward, and not terribly interesting past the first read. I really shouldn’t have had such low expectations, given the source of my recommendation, but, nonetheless, I was quite pleasantly surprised. As someone whose childhood (well, let’s be real, life) was shaped by Jackson’s The Lord of the Rings, I am fond of each and every member of the production, but I’ve been developing a new appreciation for Andy Serkis in recent years. (And not just because every time I hear Britney Spears’ “Circus”, I sing “Andy Serkis” instead.) His infectious joy at the The Hobbit: An Unexpected Journey premiere, his work in Rise of the Planet of the Apes, and his work in making motion capture more visible and respected have all endeared him to me recently, so it was a joy to hear from him this way.

And it’s Serkis’ voice through and through here; smiling, but thoughtful and unafraid to let a little sour through. Serkis talks about the resentment he felt when his work was misunderstood, by both the crew (!) and reporters during the first press junkets, and the lack of positive reinforcement that comes when a day’s work will only be seen in full in at least a year. Add to that Serkis’ beloved/hated “gimp suit”, contrasted against the hyper-detailed costumes of Elijah Wood and Sean Astin, and you can see that it’s difficult work. And it’s compounded by the fact that everything in the process is so new at first. By the time The Return of the King went into post-production, it was streamlined into an efficient work flow, but Gollum Mark I (as seen, briefly, in The Fellowship of the Ring) was thrown out and totally redesigned when Jackson decided it was important that the Gollum design look like Serkis, in order to incorporate his facial movements. As a huge Ringer, I’ve seen plenty of behind-the-scenes material on these films, but this was the first time I could wrap my head around the sheer amount of painstaking work that went into the frontiers of motion capture back in the day. While recounting some interviews, Serkis scoffs at the idea that motion capture will replace real actors, given how much more time it takes.

But it’s not all technical wonders. Other members of the crew involved in creating Gollum chime in from time to time, and we get plenty of personal photos and concept art of Gollum. We also hear Serkis’ accounts of traveling through New Zealand (Serkis is quite the outdoors man), maintaining his family, and continuing a regular acting career during breaks from filming and production. I was charmed by his relief at joining a theater production and finally having other people witness a finished performance. Additionally, Serkis discusses his thought process in constructing Gollum as a character in more depth than any other material I’ve heard him speak about it, which is quite welcome and interesting. Its pre-The Return of the King publication date does curtail it a bit (Serkis discusses that film’s prologue here without mentioning where it’ll go), but, overall, it’s a quick, nice treat for fans of the films and those interested in how motion capture works.

Bottom line: For those interested in Jackson’s The Lord of the Rings or a seminal stage in the art of motion capture, Gollum: How We Made Movie Magic is a treat. A very specific treat.

I bought this book from a used bookstore.

4 thoughts on “Review: Gollum — How We Made Movie Magic”