Scarlet by A. C. Gaughen 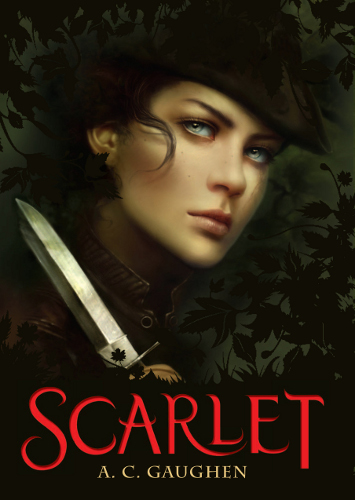 I’ve never been a huge Robin Hood fan; I mean, I watched and liked Disney’s Robin Hood, I saw Robin Hood: Men in Tights long before I could remotely understand it, and Robin Hood: Prince of Thieves must be seen to be believed. (“You! My room! Ten-thirty tonight! You! Ten-forty-five! And bring a friend!”) But I’ve never actively sought out anything dealing with Robin Hood, until Scarlet. I think I stumbled across it searching for something on Amazon, and the cover and premise (Will Scarlet was actually a girl!) hooked me. But now I remember why I try to solicit recommendations, rather than (the admittedly more fun method of) simply grabbing whatever looks shiny.

Scarlet finds the people of Nottingham suffering under the cruel reign of the Sheriff of Nottingham, who taxes them unfairly as Prince John, reigning (poorly) in the absence of King Richard, looks the other way. The only people fighting for their rights is a band of four outlaws—Robin Hood, a nobleman who lost his lands while he was away in the Crusades, John Little, his brassy right-hand man, Much, a one-handed villager, and Will Scarlet, a whip of a boy who’s quick with a knife with a big secret. Scarlet (or Scar, due to the one on her face) is actually a girl, a thief with a past she will not discuss with Rob or John, no matter how close they get. But when the Sheriff of Nottingham brings in Guy of Gisbourne to capture the outlaws, Scarlet’s past comes back to haunt her. Can the band protect themselves and Nottingham against this threat?

As a protagonist, Scarlet manages to capture two things I despise in teenage heroines, especially historical teenage heroines: too-modern feminism and a particularly virulent strain of femmephobia. As a modern feminist myself, I think it’s important for such basic ideas as “women should be legal entities unto themselves” to be brought up in young adult literature, but I also think we’re doing people a double disservice by implying that certain tents of feminism weren’t totally revolutionary for certain historical contexts (and therefore can’t be revolutionary now) and that readers can’t deal with or sympathize people whose beliefs are different from ours or downright wrong. As for the femmephobia—oh boy. Scarlet thinks other girls are silly, what with their love of jewels, physical weakness, and desire for men. I know I just said that it’s important to be able to sympathize with characters who think differently from you, but this smacks less of historical accuracy or characterization and more of what Jodie calls an excepto-girl. On top of that, Scarlet’s main characterization is that she’s grumpy and emotionally unavailable, so she spends much of the novel angrily having feelings (mostly trust issues), not talking about them, scowling, and rushing headlong into danger. On its own, this is fine, but compounded with the femmephobia, drives home this awful implication that possessing stereotypically masculine traits is the only way to be a “real” woman, instead of the truth that there are many ways to be a real woman.(In fact, the concept of one woman being realer than another is all in your mind!)  This makes Scarlet a difficult character to sympathize with, because her positive traits seem to revolve around smirking about not being like other girls, rather than any actual character traits.

Further exascerbating Scarlet’s character is the fact that Scarlet has the requisite young adult novel love triangle—you know, the forced one where you can see the outcome a mile off and wonder why the runner-up is even attractive to our heroine. I don’t like that approach, especially given how obvious the outcome becomes and how little the conflict adds to Scarlet’s character. Even in Twilight, Bella’s choices do not simply represent interchangeable slabs of man meat; they represent two paths her life can take. John and Rob offer no such difference. Since it doesn’t add to her characterization, it made me feel like Gaughen was hesitant about Scarlet’s story standing on its own, especially given that the love triangle essentially dominates the last half of the novel. I was also thrown by how Gaughen ages down her protagonists; I’m used to Robin and company being… well, not eighteen to twenty-one. There’s no reason for a young adult novel to have only young adult protagonists—you could keep Scarlet eighteen while having Robin be older, it’s medieval England. And Scarlet also commits one of my most hated sins in young adult literature by leaving a major plot point dangling for what appears to be the sole purpose of dragging out an otherwise compact story into a trilogy.

Still, Gaughen’s writing style is quite readable (I whipped through this on Christmas Day, between watching Indiana Jones and the Last Crusade and VH1), although undistinguished. And I do enjoy Gaughen’s take on Robin Hood and the Merry Men as characters; instead of merry outlaws, Gaughen focuses on the emotional toll seeing their people, especially the people they’re supposed to take care of, suffer. Robin takes on too responsibility; John fights too much; and Scarlet starves herself (a choice I was unimpressed by until given this explanation). Given Gaughen’s clear love and affection for the source, I’d love to see her tackle an adult novel where she’s not hampered by perceived requirements for a young adult novel.

Bottom line: While Gaughen has a clear affection for her subject and an interesting take on Robin’s pysche, Scarlet’s protagonist (both too modern and too backwards at once!) is difficult to sympathize with, and the forced love triangle overwhelms Scarlet’s story, as if Gaughen was hesitant about it standing on its own. A miss.