Gentlemen of the Road by Michael Chabon 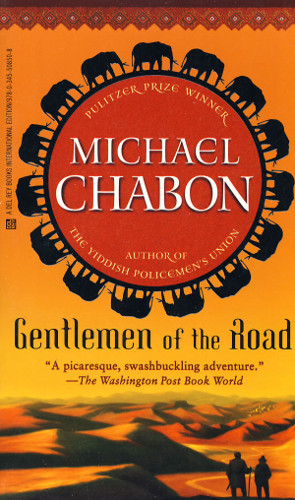 The reason I’m taking my sweet time getting through Michael Chabon’s bibliography is because it’s my comfort reading. Well, a lot of things are my comfort reading at the moment (Sherlock Holmes, The Song of the Lioness), but Telegraph Avenue had been a bit underwhelming and I wanted something a bit more classic Chabon. A novel that began life as a story entitled Jews with Swords seemed like just the ticket to calm my nerves during finals. And then I took all of finals to get through it. Well, I suppose they can’t all be winners…

Gentlemen of the Road takes place in the Caucasus Mountains in 950 A. D. and follows two unlikely partners—Zelikman, a scarecrow of a Frankish (German) surgeon, and Amram, a hulking, intellectual Abyssinian. While seeking their fortune as gentlemen of the road (which Zelikman and Amram prefer to conmen, which they are), they are approached with a job—escort Filaq, the heir of the deposed bek of Khazaria, to his family. Unfortunately, their go-between is quickly murdered, and the two partners find themselves with an ornery, fierce prince on their hands, who wants to take back his kingdom back, not hide meekly with his relatives. And despite their best intentions, Zelikman and Amram find themselves helping Filaq.

Sometimes, I take a while to finish a book because it’s long. Sometimes, it’s because I really have very little time. And sometimes, it’s because the book is being as ornery and unhelpful as its little bek. I love Chabon’s work so much because of his writing style—his knack for just the right detail, his naturalistic dialogue that still feels important enough to commit to paper. (For further evidence, please read The Amazing Adventures of Kavalier and Clay.) It’s a style that shines through “genre conventions” (I don’t particularly believe in them), even with the alternate history noir The Yiddish Policemen’s Union. Or so I thought.

While Gentlemen of the Road is dedicated to Michael Moorcock, Chabon, in the afterword, acknowledges a debt to Alexandre Dumas, among others. I single out Dumas because he was active in the middle of the nineteenth century and this novel feels like an odd relic out of time. It feels like, perhaps, an artifact from the world of The Yiddish Policemen’s Union (although the point of divergence is World War II)—a nineteenth century adventure novel with a predominantly Jewish cast. It’s what Chabon was going for, and it’s an interesting exercise—to see the usual racial politics of nineteenth century adventure novels subverted with the Vikings (here called the Rus) as the hulking, savage, and bauble-loving Other, especially in such a unique setting. I imagine history buffs will either be delighted by Khazaria or be delighted that somebody actually wrote about that. But for all of its good intentions, I just couldn’t get through the style.

During my reading for my Jane Eyre and fanfiction senior thesis (I can’t believe it’s done!), I had the misfortune of reading Thornfield Hall. Among its many faults was its misunderstanding of Charlotte Bronte’s writing style. What astonishes me about reading Bronte is how vital and clear she is, even though the dialectic disconnect of over a hundred years; Thornfield Hall thought the dialectic disconnect was the style. Chabon doesn’t offend so much as that; he clearly has a feel for the style he’s trying to imitate, and he does it extremely well. So well, in fact, that I find it hard to read. Where Bronte and Dumas were writing their hearts out in the style that was natural to them, Chabon is reigning himself in, and it’s kind of painful. It results in a strange distance between the readers and the characters—I only really ended up liking Filaq, and that’s for more archetypical reasons than his actual character. We barely get dialogue and, for an adventure novel, the action is so short and compressed that it’s never engaging. I’m trying to remember if I had a similar reaction to The Three Musketeers, but I definitely didn’t; again, Dumas wrote so vitally that even through the gap I can get it. Here, Chabon is focused on imitating that gap.

As a literary exercise, Chabon absolutely succeeds in what he was aiming for—creating a nineteenth century Jewish adventure novel. But he succeeded so well that it feels… well, dated. By a hundred years.

Bottom line: Gentlemen of the Road succeeds in imitating nineteenth century adventure novels—without the vitality glowing through the dialectic gap of more than a hundred years. A miss.

One thought on “Review: Gentlemen of the Road”