The Hobbit: An Unexpected Journey
based on The Hobbit by J. R. R. Tolkien 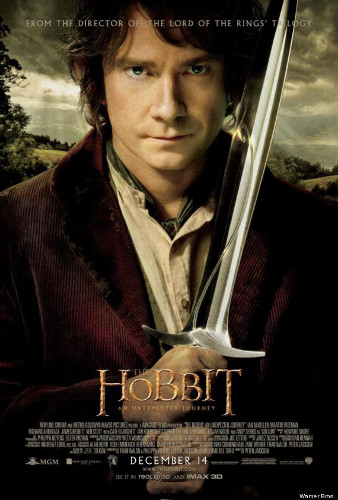 The Hobbit: An Unexpected Journey finds Bilbo Baggins—as proper and domestic a hobbit as you could ever dream of—drafted into, of all things, an adventure. Chiefly, the quest of thirteen survivors of Erebor, a dwarven kingdom decimated by the horrific dragon Smaug, to retake their homeland, led by Thorin Oakenshield, their prince, and advised by Gandalf the Grey, the wandering wizard. But even as the Company marches eastward, facing obstacle after obstacle, a darker power is growing in Middle-Earth…

I recently saw Indiana Jones and the Temple of Doom for the first time, at a cult-themed holiday party, where my fellow Valkyries and I subjected it to well-deserved derision. But there was one cinematic sticking point that we ended up dissecting more seriously: the film’s tone, which tried (and failed) to marry together light-hearted, family-friendly adventure and dark, gruesome violence. An Unexpected Journey suffers from the same thing. While I’ve heard plenty of concern over what Jackson and company were going to do to The Hobbit tonally, I was already quite prepared for it to be darker, since this is a The Hobbit film series coming after Jackson’s historically minded The Lord of the Rings trilogy. But the disconnect between a scene such as the troll scene (which revels, disappointingly, in gross-out humor) and a flashback where Thorin watches the decapitated head of his grandfather roll towards him and bravely, desperately, and foolishly attacks the orc responsible can be difficult to reconcile.

Furthermore, there’s structural issues. (I initially reacted poorly to the second flashback, but it’s settling on me.) As TORn’s Quickbeam points out, Jackson and company had to whittle The Lord of the Rings down—here, they’re expanding The Hobbit (with considerable help from the Appendices). Adding Thorin’s narrative to Bilbo’s narrative is a fine and logical way to add depth to the story, especially since this film posits itself to be the “real” story of The Hobbit (versus Bilbo’s retelling that is the novel itself), as is including Gandalf dealing with the Necromancer. Managing three story lines (Thorin’s past, Bilbo’s present, Gandalf’s present) is something Jackson and company have proven themselves quite able to do—but it just feels all over the place here. Walsh and Boyens have mentioned in interviews that they do tend to overwrite, but that Jackson helps them revise. Given my fondness for Boyens, I’m tempted to lay this at Jackson’s feet (there are definitely shades of King Kong here) and the feet of Jabez Olssen, the editor for whom this is the only the second crack at principal editor (the first being The Lovely Bones). However it happened, it means that the middle part of the film, despite being action-packed, drags; there aren’t enough moments where the film is allowed to breathe. There are other off-notes—most of the nods to The Lord of the Rings films feel too indulgent, Azog’s expanded role as chief antagonist, and the heavy use of CGI over prosthetics rob Jackson’s Middle-Earth of the heart-stopping tactility we saw in The Lord of the Rings, a particular loss for me. (I consoled myself by clutching my fur collar.)

All that being said, when An Unexpected Journey works, it works. The light tone of the novel is deepened into a mix of awe, bright-eyed impishness (Tookishness, I suppose we ought to say), and earthy decency, a world where Thorin’s stubborn, noble quest can exist side by side with a delightfully sassy Goblin King. The stone giant incident is a particular favorite of mine, taking the scene in a direction I never would have guessed that still underscores how small the Company truly is in the world—and how that will never stop them. It’s a theme repeated in the character of Radagast the Brown (whom Sylvester McCoy plays to the hilt): a dotty, domestic, and quirky wizard who nevertheless proves his mettle when push comes to shove. And Riddles in the Dark is flawless. Jackson and company approached it like a stage play and let Serkis and Freeman run the scene in its entirety, and it is brilliant. And for all the murkiness of the middle of the film and how much I really don’t like Azog as an antagonist, the ending is stick-to-your-ribs lovely.

The casting is, in a word, impeccable; Martin Freeman is Bilbo Baggins, and Richard Armitage gives Thorin a quiet anger that burns. The cast is too large to play favorites (or for everybody to get lines), but I do want to single out the sparkling James Nesbitt as Bofur and the amazing Ken Stotts as Balin. As a group, the dwarves are delightful, especially when interacting with each other and with Bilbo, as they grow to accept him in their company (some sooner than others). Ever sensitive to sisters’ children in Tolkien, I really enjoyed seeing Thorin, Kili, and Fili interact—while the film never mentions their relationship, the way Thorin chides them for making light of violence and the way they don’t want to disappoint him speaks volumes, and all three actors have fantastic filial chemistry. (Especially considering that O’Gorman is a replacement!) The returning cast is just as sparkling this time as last time (we’re all on the same page concerning how Andy Serkis can communicate his soul through mo-cap, right? Good), but I did want to particularly note Hugo Weaving as Elrond—he nails the tone of the film as soon as he rides into Rivendell, almost smirking. Everyone is giving their all, and it’s fantastic work. I just wish it had been center stage and not competing with the CGI.

Bottom line: Ultimately, there is a great film in The Hobbit: An Unexpected Journey—it’s just buried under a sprawling script, tone issues, and too much CGI. But when it works, it works—Riddles in the Dark is almost worth the price of admission alone.