Mirror Mirror
based on “Snow White” by the Brothers Grimm 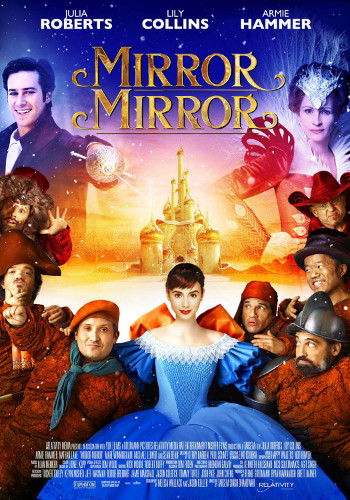 I watched the trailer for Mirror Mirror several times in the months before it came out—not so much because I wanted to see the film (I did), but because the arrangement of “I Believe in Love” featured in the film is just so catchy. I searched high and low for the original, but it couldn’t slake my contemporary pop thirst. I had to wait. I bought the song (and its remix) over the summer to work out as soon as possible, but it took me until yesterday to finally sit down and watch the movie that introduced me to my favorite Iranian pop song.

Mirror Mirror is director Tarsem Singh’s take on the classic Grimm fairy tale. After her father, the king, vanishes, the young and beautiful Snow White is left in the clutches of the Queen, a vain woman who spends the entire kingdom’s money on parties and keeping herself looking young. On Snow’s eighteenth birthday, she ventures outside to see the devastation and attempts to recruit the aid of Prince Alcott, but the Queen sees her as competition and orders her killed. But Snow escapes and, with the help of seven dwarves, begins to plot revenge against the Queen.

Mirror Mirror is probably most remembered for being that other Snow White movie, the first being, of course, Snow White and the Huntsman. Of the two, I felt much more inclined to see a candy-colored wonderland featuring the second best Snow White ever than a dark and gritty epic. (The first best Snow White, of course, is Ginnifer Goodwin.) And, visually speaking, Mirror Mirror lived up to my expectations; holy crow, is this movie gorgeous. The costumes are absolutely stunning, especially Snow’s simple and practical bandit get-up, and that same glorious excess is carried over to the rest of the film. It’s a small and rickety world, the world of Mirror Mirror, since the town appears to have a single set, the cast is, shall we say, efficient, and the world-building is delightfully all over the map, but Singh manages to make it work in a way that, say, Harry Potter doesn’t for me. (It’s probably the delightful stilt and acrobatics-based combat.) I’ve never seen another Singh production, but I’m often told I need to watch The Fall, so I might pick up the pace on that.

But the real joy of Mirror Mirror is watching Julia Roberts playing against type. I was a child in the nineties and I’ve never seen Pretty Woman, but I was still vaguely aware of Roberts’ grin and sweet charm. Casting her as the evil Queen gives Roberts a chance to chew the scenery and snark, yanking Snow’s hair, taxing the people, and getting frustrated with herself in the mirror. (Fun fact: the Queen’s reflection is not played by Roberts, but her sister, Lisa Roberts Gillian. The more you know!) In fact, a sweet snark suffuses the script of Mirror Mirror. When Snow tells Alcott that it’s time to flip the script on princes rescuing princesses, he pleads that those stories have been focus-grouped and tested. The line “The Queen radiates crazy” is uttered. (The line “A grasshopper took advantage of me” is also uttered.) And it’s honestly delightful. So often, fairy tale parodies can feel like they come from a mean or cynical place, but Mirror Mirror is happily self-deprecating even as it remains true to its earnest little Day-Glo heart.

Of course, it’s not perfect. Mirror Mirror is firmly aimed at the preteen set, so the normally saccharine but suitable for all ages tone occasionally dips into juvenile humor. There’s a flat gag where Snow gets spanked during a duel with the prince, and some of the comedy of the dwarves, which is, for the most part, quite good and character-based, feels a little tacked on, like the end of a scene where the characters are locked out of their house. That being said, I was holding my breath when the prince and his manservant end up tied together mostly naked for fear of a “no homo!” joke, but, thankfully, the characters’ only concern is being steamed they were bested by dwarves. Whew! For a movie that’s otherwise very good all-ages comedy that doesn’t talk down to kids or adults, it’s a bit of a shame to see them stumble in certain points.

But the Bollywood number in the credits almost makes up for it.

Bottom line: Mirror Mirror is a happily self-deprecating take on Snow White, true to its earnest little Day-Glo heart. The movie’s gorgeous and Roberts is a lot of fun, although some of the comedy can feel a little juvenile. Worth a shot.

I watched this on Netflix Instant.